This blog re-publishes an article I wrote in 2007. It is  travel essay covering photogenic historical sites in Georgia including the City of Savannah, Chickamauga and Chattanooga National Military Park, Andersonville National Historic Site, Martin Luther King Jr. National Historical Site, and others.

It was first published by the Travel Photographers Network, also known as TPN. I’ve discovered broken links on my website to several articles previously published there. The links broke when the Travel Photographers Network overhauled their website. The articles may or may not be republished by TPN, but until then, over the next several days, I’ll republish those articles here on my blog so I can re-establish links.

Standing in a rain-soaked, grassy field, I could barely see the line of artillery at the misty edge of the forest trees. Around me are other artillery pieces sporting big, brown-spoked wheels, their cannons green with age; some slightly rusty. Nearby are stacks of cannonballs, placed where officers fell and died. The higher the stack, the higher the dead soldier’s rank. Though peaceful today, in my mind it’s easy to imagine lines of gray and blue men, struggling, fighting, and dying.

Cannon in front of the visitor's center, an old southern mansion, at the Chickamauga and Chattanooga National Miiltary Park and Battlefield

Throughout much of the United States, it’s difficult to get a true sense of the historic. Unlike Europe and much of the rest of the world, America is just too young for a visitor to feel much history, such as one instinctively feels standing at the Acropolis in Athens or the Coliseum in Rome. But here, in the midst of Georgia at the Chickamauga & Chattanooga National Military Park, history impregnates the scenery. The same is true in much of Georgia, which is filled with important American historical sites from aboriginal times, the colonial days, the American Civil War, and even modern times. Georgia boasts twelve sites in the National Park system, nine of which are related to American history. Most are within a day’s drive of Atlanta. Visiting these nationally recognized sites presents the travel photographer with a wealth of visually stimulating and historical opportunities.

The Chickamauga & Chattanooga National Military Park encompasses a broad area of forests and fields in northern Georgia near the town of Fort Olgethorpe. It is one of the few spots in the United States where the Confederates won a Civil-War victory (the Confederate south of course, later lost the war to the Union north). Here, in 1863, General Braxton Bragg lead 43,000 Southern soldiers in defeating 66,000 Union soldiers headed by General William S. Rosencrans. The defeat directly lead to Ulyssess S. Grant assuming overall command of the Union forces. Grant later became President of the United States. The visitor center is housed in a southern mansion and offers descriptions of the battle, as well as a large collection of rifles used not only in the Civil War, but also throughout American history. The park is filled at seemingly odd locations with monuments to regiments from both sides, stacks of cannon balls where officers died, and lines of cannons and mortars, all which can make interesting photo opportunities.

I found the Andersonville National Historic Site in south-central Georgiato be truly moving. Andersonville, also known as Camp Sumter, was the largest of the Confederate military prisons operating during the Civil War. Today, the prison site itself is a broad, sunny, grassy field with a few sections of wooden stockade wall. It’s hard to imagine the 34,000 men packed into a 26.5-acre prison area, surviving with little fresh water and poor sanitation. The reality of the prison’s history is more tangible at the National Cemetery also situated on the Historic Site grounds. Row after row of white marble gravestones mark the resting place of the 13,000 prisoners who died at the camp. Other sections of the cemetery are reversed for American veterans from other wars. Also built at Andersonville is the National Prisoner of War Museum, which tells not only the story of the Civil War prison, but also memorializes American prisoners of war from the Revolution to the first Gulf War. All together, the museum, cemetery, and former prison grounds provide many poignant photographic subjects. A telephoto lens is particularly useful in the National Cemetery for compressing thousands of gravestones into a single image.

Perhaps there is no place in Georgia where history is more alive than in Savannah. The city was founded in 1733 and was America’s first planned city. Its founder, James Oglethorpe, laid out the city in a grid pattern with wide boulevards and 24 squares; 21 of which are still present today. As a major seaport, the city flourished with the cotton trade, especially after the cotton gin was invented on a nearby plantation.  Cotton prices for the world were set at the Savannah Cotton Exchange, whose building today houses small shops and restaurants. During the Civil War, Union General William Sherman ravaged and burned Georgia on his way to the sea, but he spared Savannah as a gift to President Lincoln.

Although more than 10,000 people are buried at Colonial Park Cemetery in Savannah only about 600 headstones remain. Some misplaced headstones have been mounted on the brick side wall of the cemetery.

That gift has left Savannah with many elegant, historic homes and churches dating from the 1700s and 1800s, which today provide excellent photographic opportunities. Historic churches in Savannah include: the Lutheran Church of Ascension, built in 1741; the First African Baptist Church, the oldest African American church in North America, founded in 1777; and Temple Mickve Israel, the third oldest Jewish Congregation in the United States (1733) whose gothic synagogue was dedicated in 1878. All these, and many more, are found in Savannah’s historic district, an area 20 blocks long and twelve blocks wide. The streets and squares of the historic district are lined with grand, old oak trees, dripping with spanish moss. Each square is distinct, with statues, monuments and gardens. Beautifully restored townhouses and homes are on most every corner. Many serve as bed-and-breakfast inns, allowing a travel photographer to sleep and eat in one of their potential subjects. Also of photographic, and historical, interest are the city’s two major cemeteries: Colonial Park Cemetery, with graves dating from Georgia’s colonial days, and Bonaventure Cemetery, made famous by the book and movie “Midnight in the Garden of Good and Evil.” 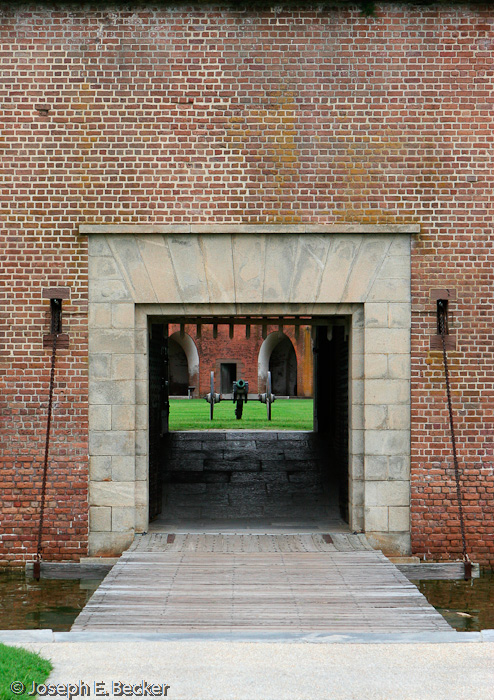 Entrance to Fort Pulanski, a civil war era fort on the coast by Savannah

Just east of Savannah, at the mouth of the Savannah River, is Fort Pulaski National Monument. This military site has held various forts since 1761. The current fort took 18 years to build, starting in 1829, and stands as a proud monument to the day when masonry forts were the height of military defense. Just 13 years after it was finished, in its first battle of the American Civil War, that day ended when 30 hours of bombardment from the North’s new rifled cannons pierced the fort’s 8-foot thick walls and the fort’s commander surrendered. Today, the fort’s brick walls still contain cannonballs from that fateful battle. Besides examining Civil War era military hardware, the enterprising travel photographer can find abundant wildlife on the grounds, including alligators in the fort’s moat.

More modern, but no less important, history can be found back in Atlanta. This city was the birthplace of Martin Luther King, Jr., America’s most famous civil rights leader. A National Historic District named in his honor celebrates MLK Jr. and his legacy. There is an impressive visitor center containing powerful exhibits on American apartheid and the evolution of civil rights in the States. His birth home, a two-story Victorian, is preserved. Sitting in the well-worn wooden pews in Ebenezer Baptist Church, where he preached, brought me memories of old news clips of MLK Jr. preaching from the pulpit. Most touching, at least to me, is MLK Jr’s crypt, set on an island within a series of reflective ponds.

Other Georgian sites of photographic and historic interest include Ocmulgee National Monument, which preserves earthworks created by pre-historic inhabitants of the region; the Jimmy Carter National Historic District in Plains, where the ex-president still lives; and the old Atlantic Coast Highway (Highway 17) along the south Georgia coast.

I visited in summer, when the weather was hot and steamy, with afternoon thundershowers. This weather kept crowds down at the historic sites outside of Atlanta and Savannah. The Chickamauga battlefield was quiet and empty, Andersonville was all the more haunting because it was deserted, and the earthen mounds at Ocmulgee were silent with age. More people are about in spring, which is much milder and drier, and offers lots of flowers. Traveling to Atlanta is simple; the airport there is one of the largest in the United States. For visiting sites outside of Atlanta and Savannah, a car is almost essential since there is relatively little public transportation outside the cities.

Although more than 10,000 people are buried at Colonial Park Cemetery in Savannah, only about 600 headstones remain. Many areas in the cemetery have very few standing headstones.

Inside the fort, Fort Pulaski National Monument, near Savannah 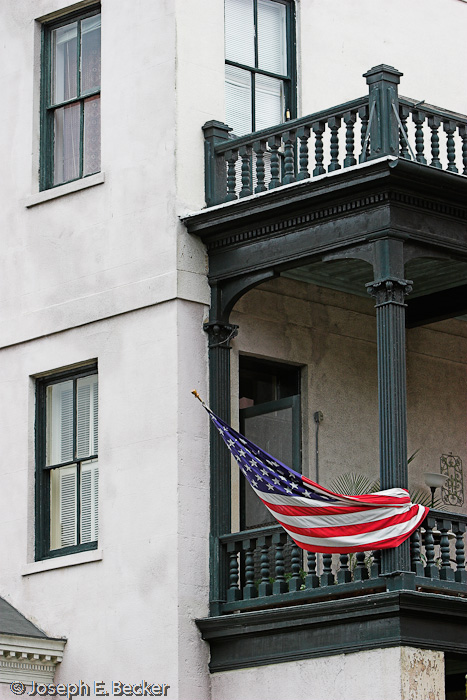 Details of a typical house in the historic district of Savannah 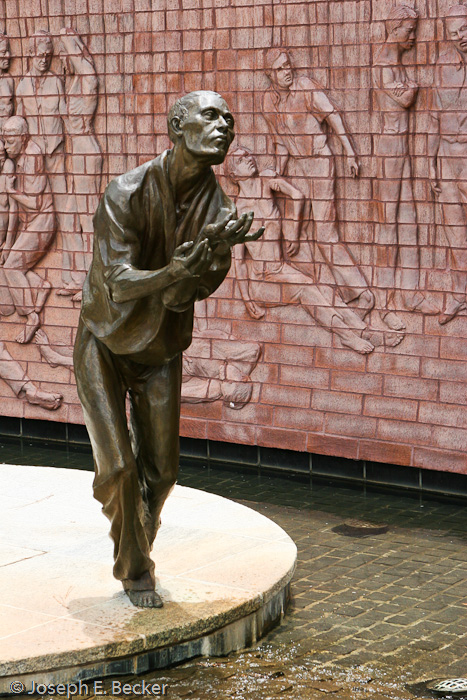 Close up look at cranes in the Landmark Fountain in Forsyth Park, Savannah

Refleciton of the steeple of the new Ebenezer Baptist Church at the Martin Luther King Jr. National Historic Site in Atlanta