Land of the One-Eyed Cat 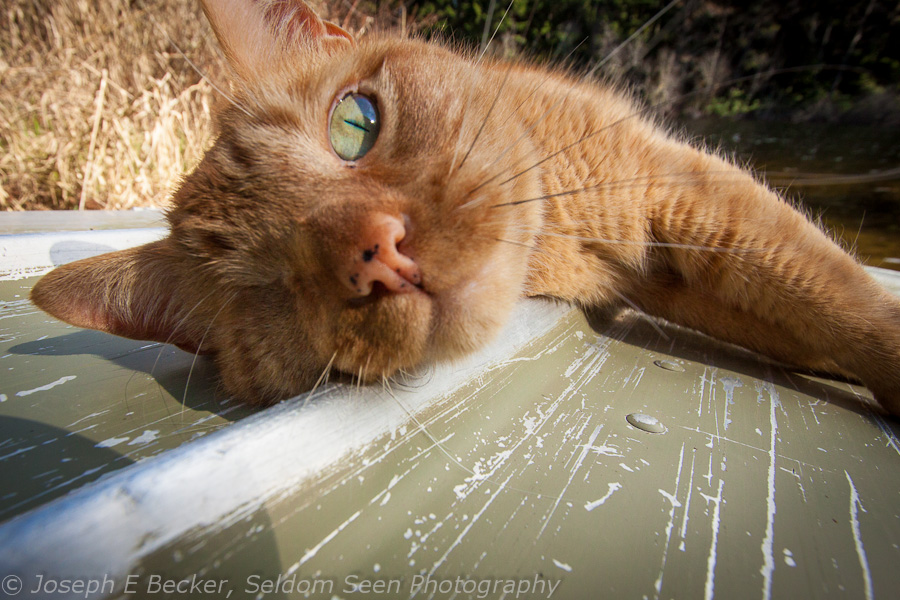 Saturday, I went on a church retreat. Normally, Tanya has to talk me into these things, but this retreat included a session for photography! Talk about a progressive church! (We also had drumming and Tai Chi sessions.) The retreat was held at Pilgrim Firs, a UCC-sponsored camp and retreat center on the forested shores of Lake Flora in Kitsap County, Washington.

While spring has apparently sprung in the city (blooming trees and daffodils, etc.), it hasn’t quite hit the forests of Kitsap County. Though the forest is mostly evergreens, it has a kind of half-bare look. A lot of the undergrowth and  the trees by the lake were still bare. No green leaf buds to be found! I’m not a fan of the typical western Washington winter forest look, so most of my images were macros of moss, leaves, bark, and such, though I did have some fun with the camp cat – a very impressive one-eyed orange tabby. – who, according to signs in the lodge, likes to get into visitors’ cars if the windows are open. Apparently, this cat rules the place.

Now that spring is here, I’ve tried to take a day off to go do some “real” photography, but have been thwarted by the weather. I might just have to suck it up and go in the rain (like I did for my coastal trip in February). I actually planned to take today off, but the weather report sent me to work instead. Maybe later this week. Meanwhile, I hope you like these images from the land of the one-eyed cat. 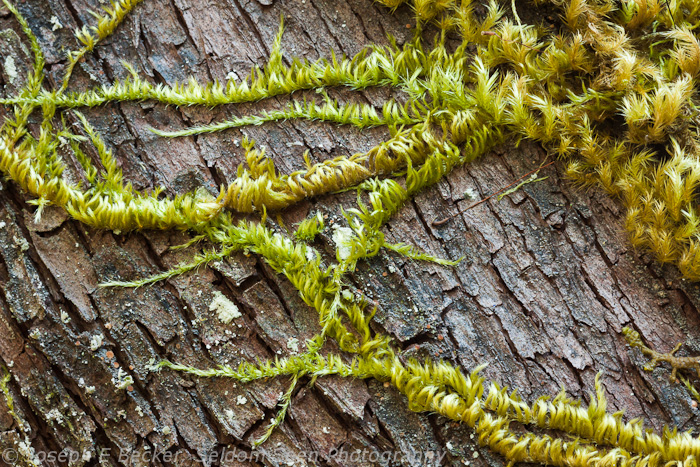 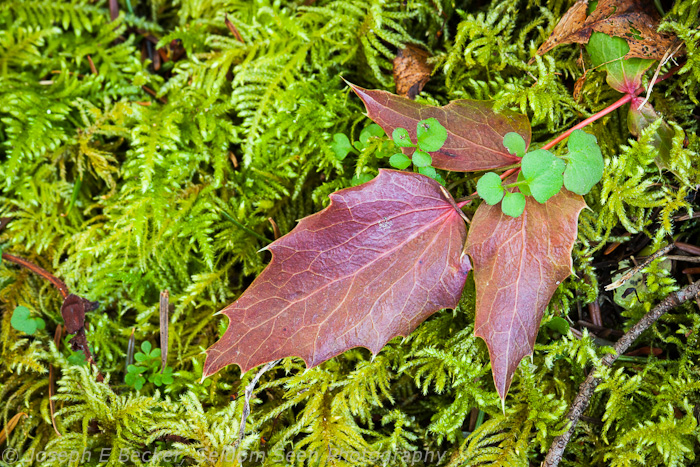 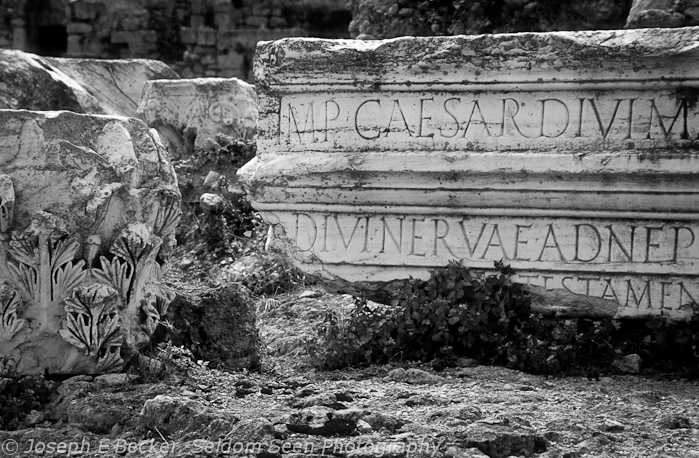 It’s been quite awhile since I’ve updated anything on my website. Since an update was long overdue, last weekend I added a new gallery with images from Greece to the travel galleries on my site. These aren’t new images; they are from a trip Tanya and I made to Athens and the Peloponnese peninsula taken nine years ago this month. The images are old enough that they were taken with my pre-digital camera, an Olympus OM4T, using slide film. I  scanned the images with with a film scanner and digitally developed them in Lightroom and Photoshop.

The ease of adding new image galleries to my site is one reason I developed the site with Lightroom plugins from The Turning Gate. Unfortunately, I haven’t been taking advantage of the ease these plugins give me. Stay tuned, I hope to have a few more new galleries up and running over the next several months.

Speaking of making web galleries with Lightroom, I upgraded to Lightroom 4 a short time ago, and generally like it a lot. However, generating a new web gallery in LR4 was a lot slower than with my old version of Lightroom – and this is not the fault of The Turning Gate plugin, the problem lies with Adobe. Luckily, however, according to the blog at Turning Gate, this is a problem with LR4 that hopefully will be fixed soon.

The image I chose to illustrate this post is titled “Fallen Caesar”. I was attracted by how a monument to a once mighty deity was now nothing more than a piece of fallen, discarded rock. I shot it in ancient Corinth. The light was pretty bland when I shot the image, and there wasn’t much color in the slide. Thus I chose to convert it to black and white, which I did in Lightroom; I think it turned out quite well.

Be sure to check out the new gallery to see more. I hope you enjoy my new “old” images from Greece.

Flying Dogs and Toto too

Last Saturday, Tanya and I attended the Seattle Dog Show. Inspired by the dog photography of my friend Tom Guffey, I thought I’d try my hand at shooting some of the show. I came away even more impressed by the work of Tom. Shooting images of flying dogs is tough!

First, it’s dark and using flash is a big no-no. I had my camera set at ISO 3200, using f-stops of  f/4 and f/5.6 and shutter speeds between 1/50 and 1/320 seconds. Digital noise was definitely an issue in my images. Secondly, dogs move – especially when flying. When using fairly wide open f-stops, particularly with my 70-200mm zoom which I used at the agility ring, there isn’t much depth of field. It’s tricky getting the focus right. I set my camera to AI Servo focus mode, to track moving subjects; but as I primarily shoot non-moving things, I’m not very experienced with AI Servo. As you might imagine, there were a lot of rejects for every shot that was almost in focus. Even with these tough lighting conditions, it sure was a fun time.

Here’s some of my favorites from the show. 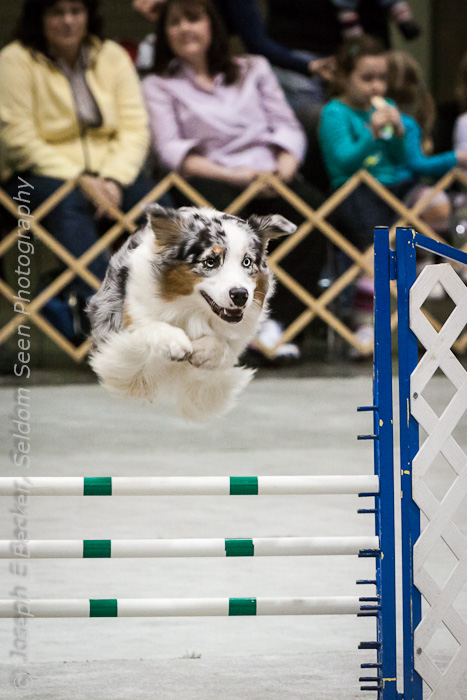 In the agility ring, this guy had no trouble with the jumps.

I love the determination on this pug's face. Note the height of the jump was a little less for him.

A lot of people think Corgis are cute. This pair is living up to that reputation.

Of course, bulldogs are cute too! 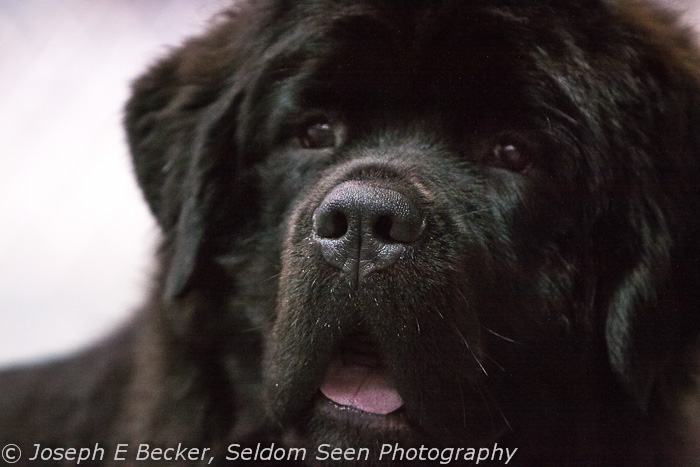 But, I'm partial to Newfoundlands. This one is a cousin of Tanya's and mine newfie, Carson. And speaking of poor lighting, as I did above, try taking a picture of a black dog in dim light and still get detail!

This dog looks like he is having a great time showing off for the crowd.

I call this image "Takeoff" for obvious reasons. 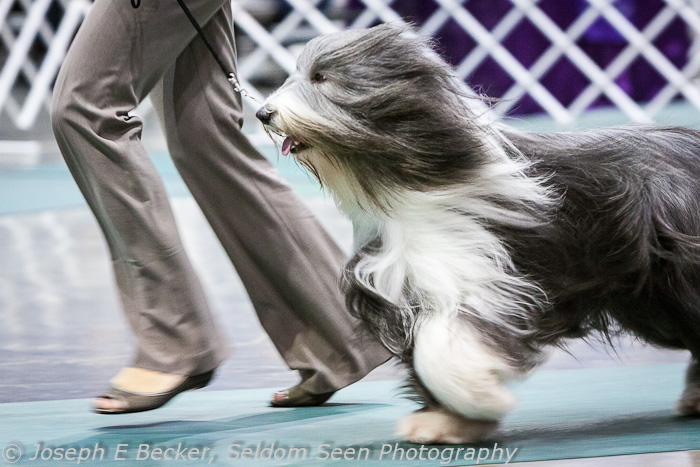 In the Old English Sheepdog ring.

And speaking of sheepdogs, how about this one's hairdo.

Back in the agility ring, there are are the posts to run around as well as the jumps. 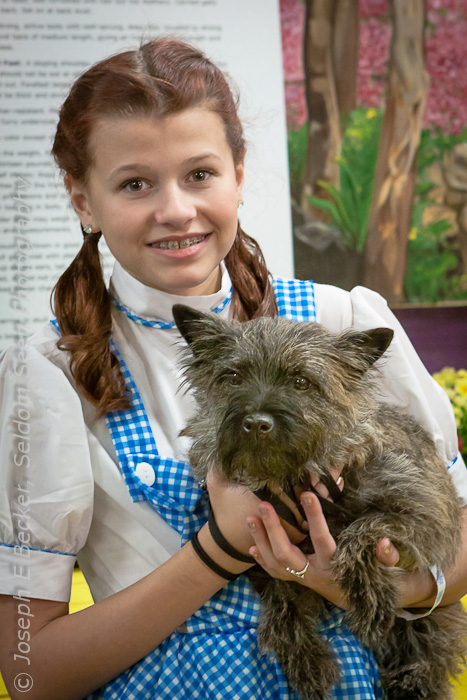 And what would a dog show be without Toto (and Dorothy of course).

Striking Out at the Port

I’ve lived in the Tacoma area for almost 20 years and have never bothered to investigate the Port of Tacoma with camera in hand. So the other day, I went down there for a couple of hours to see what I could find. As it turns out, I didn’t find much. There is not much public access in the port. I guess that is not too surprising, and I could have figured that out before heading down there by checking out Washington’s public shore access website. There is plenty of public access on the Thea Foss Waterway, by downtown Tacoma. However, that area is much less “port-like,” being full of pleasure boat marinas. The north end of the Thea Foss does have large ships tie up at the grain elevator terminal, so my first stop was at Thea Park, just down the shoreline from the grain elevators.

After a few shots, such as the one featured with this post, I crossed over to the east side of the Thea Foss Waterway and tried to follow the shoreline looking for other views of ships. Most the views are fairly limited – behind fences, acres of containers, etc. There is restricted access on many roads – likely the result of 9/11. The only true public access in the whole port is at the Port of Tacoma office, on the southern end of Sitcum Waterway. Here, there is an observation tower, with a nice view of the working port. However, the port was not working much that day. There was only one ship in the Sitcum Waterway, so my photo opportunities were limited. The two photos below are from that spot.

Leaving there, I drove down the west side of the Blair waterway. There were ships in the Blair, but no way to photograph them. When driving back up the east side of the Blair, I finally found a promising spot – the former parking lot for the closed Emerald Queen Casino. It was a big empty lot, right next to the water. There were views available of several ships, including the old paddle-wheeler at the casino.

I was walking around a bit, camera and tripod in hand, checking out angles. But before I could take a shot, a car came shooting across the old lot directly for me. It pulled up, window rolled down. A security guard within, our conversation went something like this:

Security Guard: “Young man, can I ask you what you are doing?” (Now, I’m 52 and have mostly grey hair, which tells you about the age of this guard.)

Me: ” Just looking around.”

Security Guard: “This is private property and a restricted area. You drove right by a sign saying so when you came in here.”

I wanted to ask him if it’s such a secure place, how come there were thousands of spent fireworks all over the pavement. But thinking better of it, I just turned and walked back to my car. As a did, the guard drove around me and back toward the street entrance. There, he stopped. I thought he was just waiting for me to leave. But he got out of his car and started looking around on the side of the road. I got back in my car, and drove toward the entrance. Just before I got there, the guard picked up a sign that was laying face down on the ground and started struggling to make it stand upright. The sign read: “Private Property, Restricted Access, No Trespassing” or something to that effect.

As I was leaving, I stopped and rolled down my window. I asked the guard, “Is that the sign you mentioned?” He got a sheepish grin on his face, and said yes. I smiled, gave him a slight nod, and drove home. 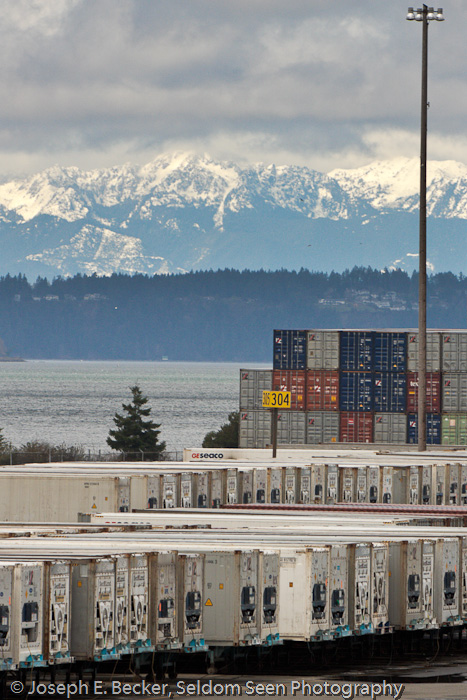 My daughter Janelle turns 21 today. I remember the day she was born, 21 years ago in Seattle. There as a big thunderstorm and it even snowed a bit. An appropriate welcome to the world for a girl who has always been her own person – often to the chagrin of her dad when she was growing up. Now, she’s a fine young woman of whom I couldn’t be prouder. Janelle will graduate later this month from University of California at San Diego with a double major in mathematics and econ science. Following graduation, she is planning a 2-month trip to Europe with her boyfriend, before heading to Seattle to start a job with Amazon.

Happy birthday Janelle from your very proud father. Have fun (and stay out of trouble)! 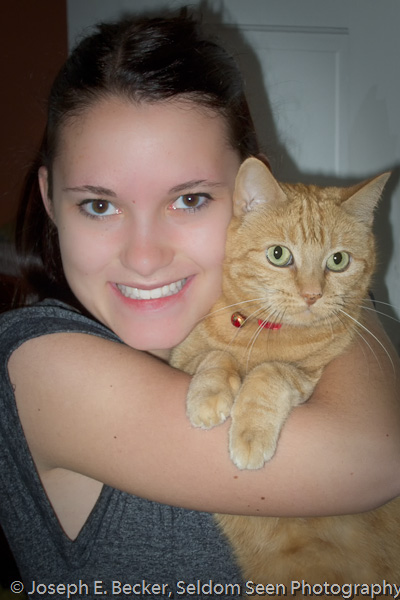