Yesterday, being our first full day in New York, I decided to carry the full camera bag and tripod around. Probably not the best move, since the camera bag bumped into several people, including Tanya (according to her, about 25 times). We hit two big sites yesterday, the Metropolitan Museum of Art and the Top of the Rock.

It is the museum’s policy to have visitors check all bags and backpacks – except for camera bags! At the security desk, they gave me a special pass allowing me to carry my camera bag (backpack) in the museum. However, it could not be worn on my back. Most of the visit, Tanya wore it for me on her front – what a woman! And, as it turns out, tripods are allowed on Wednesdays through Fridays – again with a special pass, this one given out by the information desk. They tape the pass to the tripod, so that the museum the guards/docents can see that you have it. I got the feeling they didn’t particularly like me using my tripod (more than one dirty look), but only one or two checked my passes. I felt rather special, being able to use the tripod; and it came in very handy, since flash is not allowed.

After the museum, and a short taxi ride, we arrived at Rockefeller Plaza. Here we bought our tickets to the top ($25 each, a bit steep if you ask me), and went to have a drink at the Rockefeller Cafe (with windows on the ice-skating rink). We had to wait an hour, then went through security (think airport, complete with x-ray machines and metal detectors) to go up. At security, they asked “did anyone tell you about the tripod policy?” “No,” I said. “Well, you cannot spread the legs; you can only use it with the legs together like a monopod.” I’m thinking, you’ve got to be kidding, a classy place like the Metropolitan Museum lets me use a tripod, and a tourist dive like the Top of the Rock will not?

The Top of the Rock is on the 68th, 69th, and 70th floors of Rockefeller center. The 70th floor is a 360-degree, open-air view. There were one of two other people using tripods, and I wanted to take a shot of Tanya and I with the city in the background, so I broke the rules and no one said anything. It was about 6:20 p.m. and dark. So I used the flash for us and a long exposure for the background lights. (Hint – when shooting a photo like this, have the subject stay still through the entire exposure, in this case 10 seconds, not just during the flash. If the subject moves after the flash goes, the background will be visible through the subject.) Tanya went inside out of the cold (the wind was blowing) and I took a lot more shots (trying to not fully extend my tripod legs). This, coupled with the wind, presented a problem, and most the shots I took turned out blurry. However, I did get a few relatively clear ones and put together the HDR image featured here (three shots, 2 stops apart).

Today, I left the tripod at the apartment we are renting, and we went to the American Museum of Natural History (no tripods allowed). Tonight, I did pull out the tripod again to take more night shots – this time with the legs fully extended. These shots are of the skyline and East River from Roosevelt Island (which is where we are staying). I doubt I’ll have a chance to process those until I get home, so stay tuned and hopefully I can show you in a couple weeks how those turned out.

Tomorrow we leave New York and fly to Spain. I hope to have another post from there in a few days.

Tanya and I at the Top of the Rock 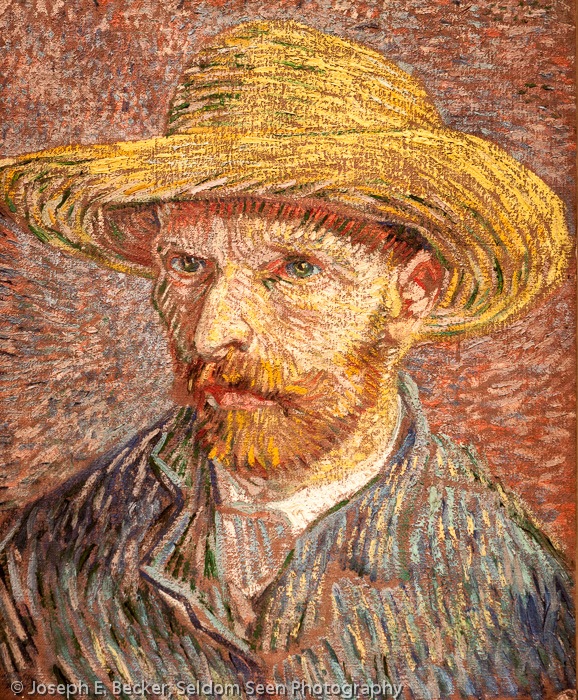 van Gogh’s “Self Portrait with a Straw Hat”, one of the many wonderful paintings in the Metropolitan Museum of Art

This entry was posted on November 10, 2012 by joebecker. It was filed under Photo Processing, Photo Techniques, photography, Travel Photography and was tagged with Metropolitan Museum of Art, New York, New York City, Top of the Rock, tripod.