Autumn in the Oregon Cascades 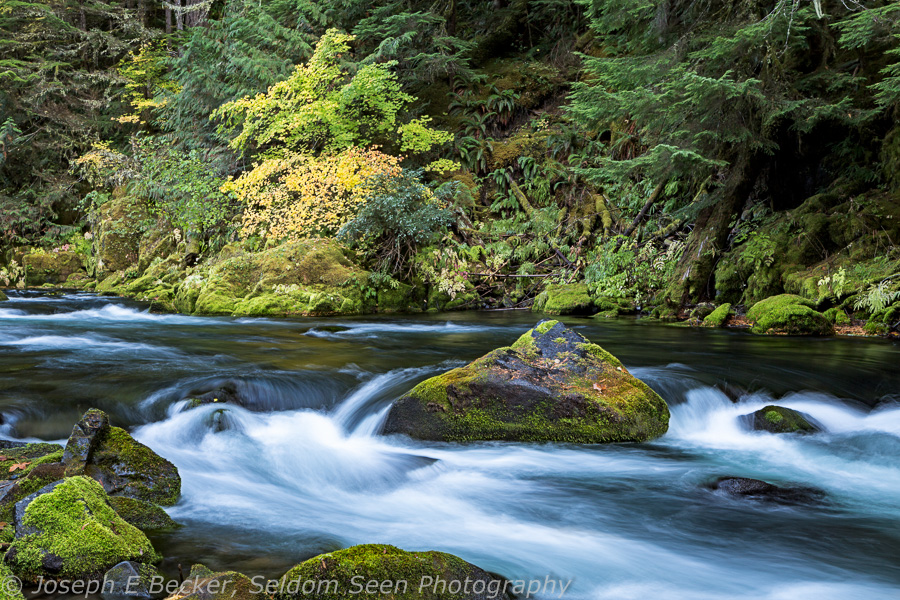 On my trip several weeks ago, besides visiting Silver Falls State Park, I drove through some of the Oregon Cascades. It was, perhaps, not the height of autumn color in the Cascade Mountains, but it was close. Prime time may have been last week, or maybe this one. Regardless, now is the time to be out there; the mountains in Oregon, and here in Washington, only surrender some of their green for a short time each year.

I hoped I’d have more time to write a post about the Oregon Cascades, but unfortunately I don’t. I will say they do seem more accessible than the Washington Cascades, with more and better access roads. After just  a couple of days there this fall, I know I’d like to go back for at least a week, if not longer. So with that, I’ll just post a few images I captured in the mountains (and one in the Columbia Gorge, as well), and let the images speak for themselves about autumn in the Oregon Cascades. 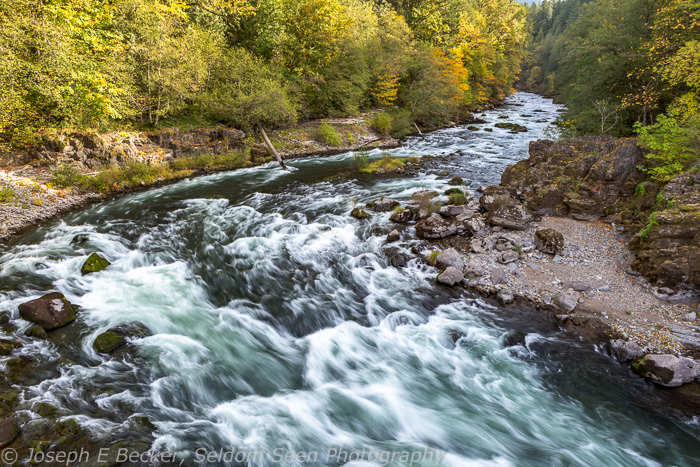 The Santiam River at Niagara 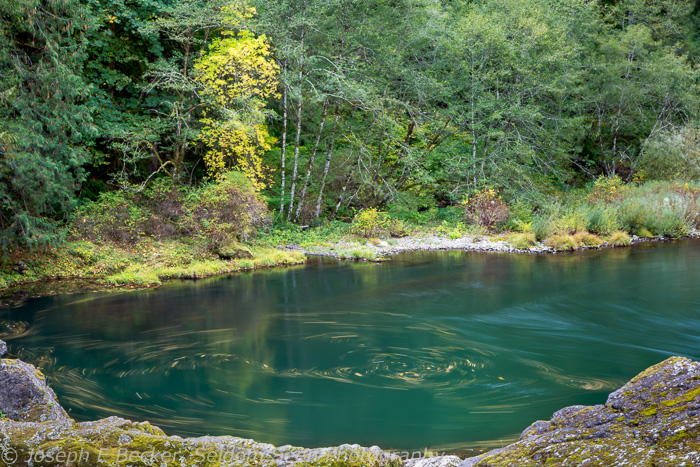 Swirling pool in the Santiam River below Niagara 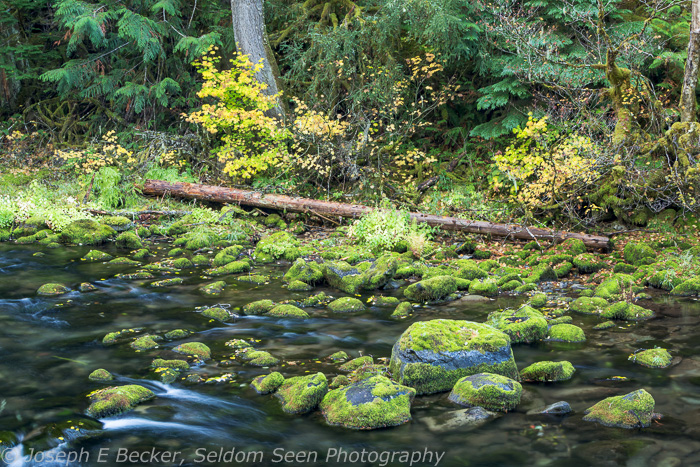 Along the upper Clackamas River (the featured image above is also on the Clackamas). 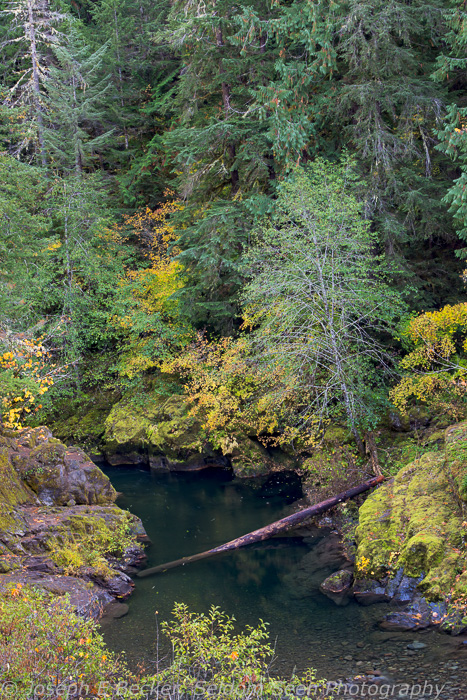 Color along the Breitenbush River – I was a bit early, that green tree leaning over the river is probably yellow by now. 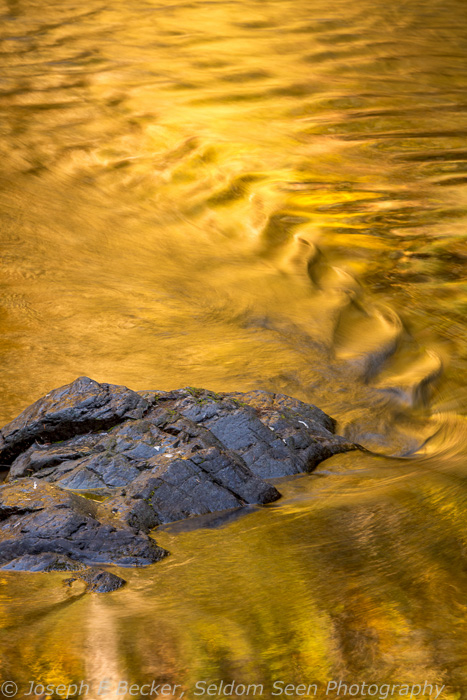 Reflections in the Breitenbush River 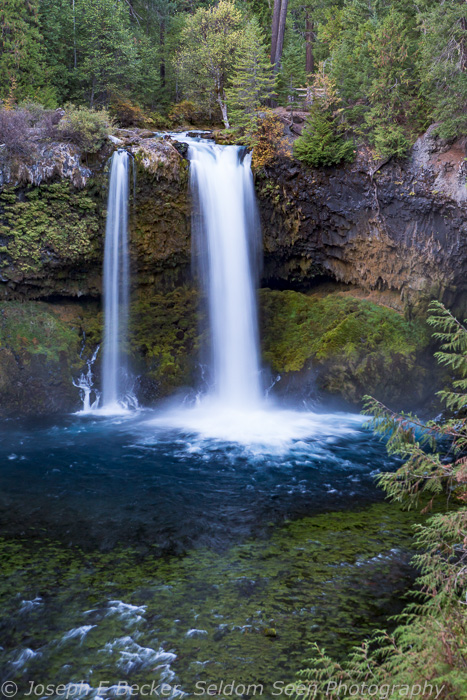 Koosah Falls on the McKensie River 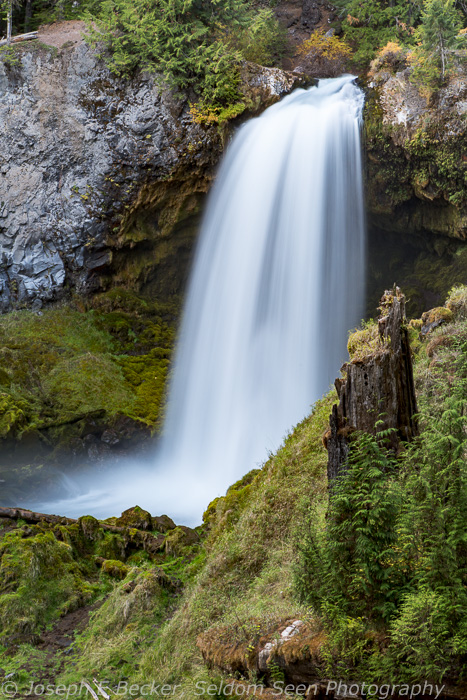 Sahalie Falls on the McKensie River 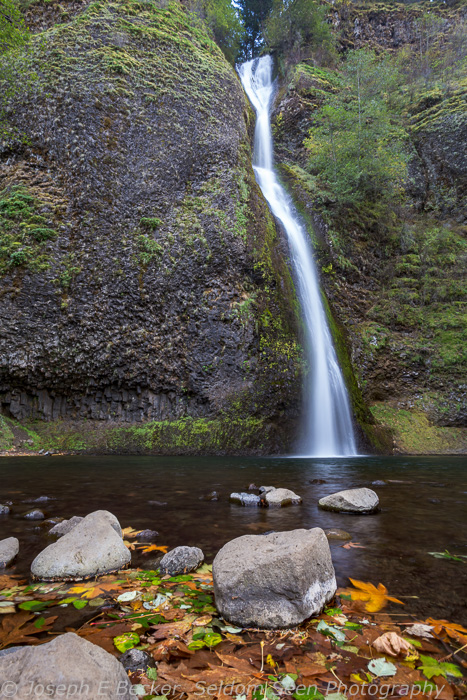 Horsetail Falls in the Columbia Gorge – the maple trees here were still mostly green when I was there, though there were some colorful leaves in the water. 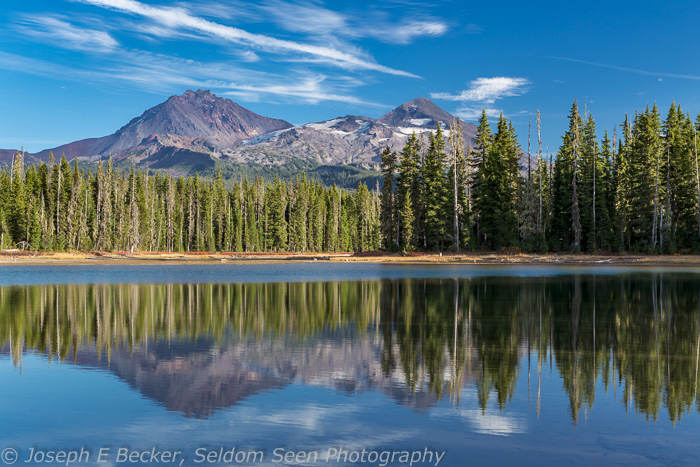 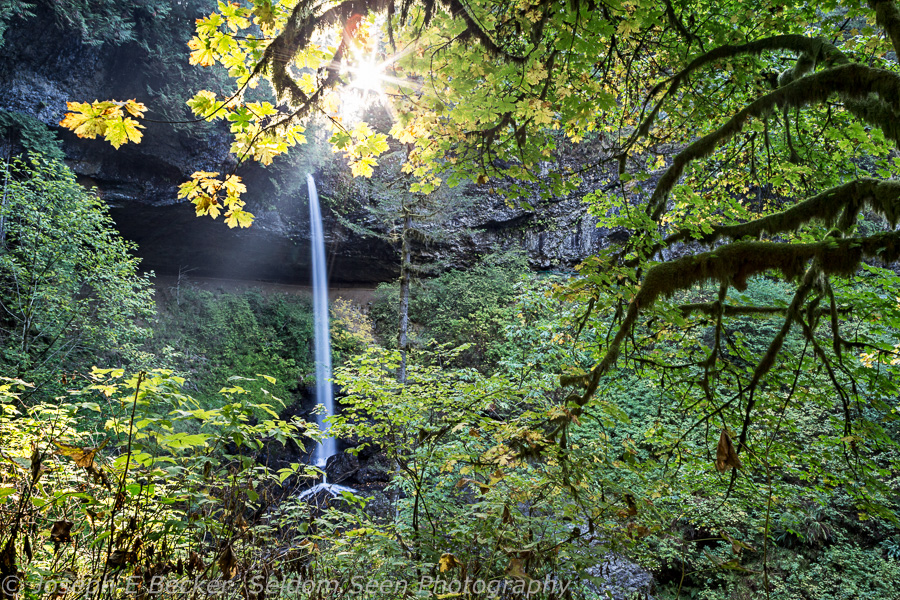 Tanya and I spent three days in Oregon last week. We stayed in Silverton, and I made several trips to Silver Falls State Park as well as a couple drives up into the Cascades looking for autumn color. Due to the drought we’ve had in the Pacific Northwest, there wasn’t much water in the falls at Silver Falls State Park, but the color was nice. It was a great time to be out enjoying the outdoors. I’ll post a few more shots from the trip later, but for now, I give you this early morning shot of North Falls in Silver Falls State Park. Enjoy. 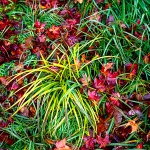 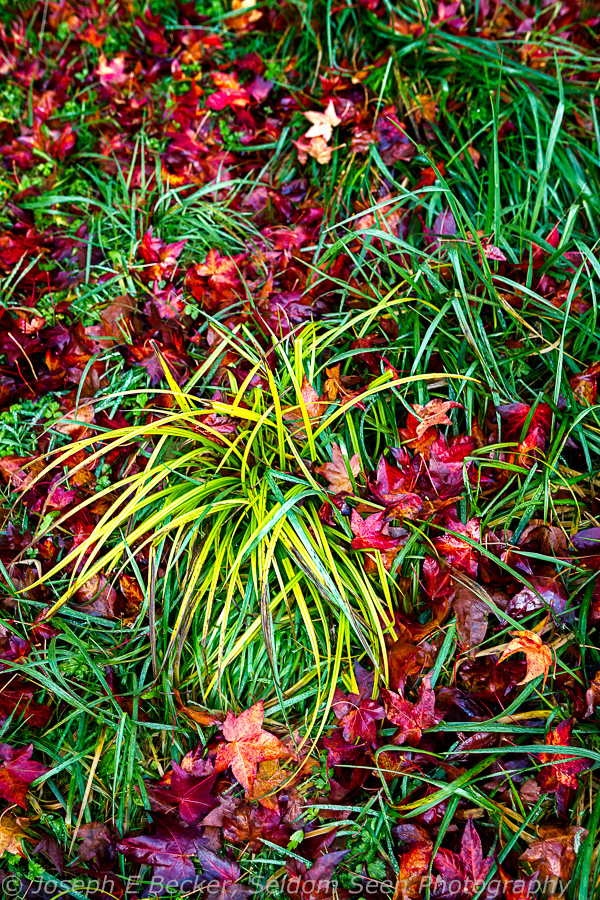 I recently was completing some long over due editing from shots I took in 2013 and came upon this image. I had not touched it since importing it into my Lightroom catalog nearly two years ago. I decided to see what I could do with it. Below is the original file as imported into Lightroom and the version after processing in Lightroom. The feature image is the finished product out of Photoshop.

I was originally attracted to the image because of the pattern of the yellow grass and the scattering of the red leaves. The scene was in shade on the afternoon of a late fall day in November – there was not much available light. I can’t remember if I was without my tripod, or just too lazy to use it, but I took the shot handheld. To have a fast enough shutter speed to not have camera shake, I upped the ISO to 1600, which resulted in a shutter speed of 1/60th of a second. It wasn’t enough. Viewing at 100% in Lightroom showed the image was not sharp.

I thought it might be saved with the shake-reduction filter in Photoshop, so I opened up PS. Indeed, the shake-reduction filter seemed to work wonders. My workflow is normally not to bring an image into Photoshop until I’m done with it in Lightroom, but rather than go back to Lightroom, I opened up the camera-raw filter and attempted to do my “Lightroom” processing there. (Adobe Camera Raw and Lightroom reportedly have the same capabilities.) I was quickly reminded why I like Lightroom better than Adobe Camera Raw and scrapped the image and started fresh again in Lightroom.

In Lightroom, I started, as I normally do, by doing a default lens correction and adding noise reduction to counteract the high ISO noise. Following my normal workflow, I went to the Basic menu and worked on the tone and presence. I started by reducing the exposure by about 1/2 a stop, warmed up the temperature to rid the image of blue tones from the blue sky reflection and adjusted the tint to add a bit of green. I then adjusted the clarity (to the mid 20s) and vibrance (to the mid 30s) sliders to punch up the colors a bit. That’s a bit more vibrance than I normally use, but it seemed like it needed it. The vibrance wasn’t helping the reds enough, so I also added a small amount of saturation.

I then set the white point with the white slider and adjusted the highlights slider down. I normally set the white point, usually increasing it, as a way to improve contrast. It often results in the highlights being lighter than I want; such was the case here – thus the reduction of the highlights slider. It took several iterations to get it where I liked. I then set the black point with the black slider (and thus finish the contrast improvement without using the contrast slider, which I normally leave set at zero – as I did here).

At this point, there was one leaf in the upper half of the photo that was too bright and distracting. So I used the brush tool to dim it down a bit. With that bright leaf now dimmer, I made one final adjustment to the white and highlights sliders. Made a final adjustment to the temperature slider, and punched up the image a bit more by using the dehazing slider and added just a touch of vignette to help focus the eye into the image. The result is the second image below.

At that point, I exported to Photoshop and re-accomplished the sharpness fix with the shake-reduction filter. After working that shake-reduction magic, I followed my normal Photoshop workflow for nature/landscape shots by working Tony Kuper’s triple play actions on the lights and darks (these actions use luminosity masks to affect the contrast, brightness and detail definition – in this case I was most interested in the detail definition).

From there I worked on targeted adjustment to bring my final vision out for the image. I wanted to yellow grass to really stand out, so I made mask for the yellows and used it on a levels adjustment layer to make them brighter. I only wanted this effect on the yellow grass in the center of the image, so I placed the levels adjustment layer in a group and masked the group, allowing only the center portion to be affected.

Next, I thought the greens were too bright, so I again made a mask from the greens and used it on another levels adjustment layer to darken them up a bit.

In looking at the image, I still wasn’t happy with the reds, so I added a hue/saturation layer and bumped up the saturation just a bit on the reds only.

I finished it off by adding a dodging/burning layer, and painting black to darken, I darkened approximately the upper 1/4 of the image as well as a bit on the sides and bottom. This improved upon the vignette I had placed in Lightroom. The result – the image you see above.

It took much longer to write this than to do the actual work in Lightroom and Photoshop. I think, in total, it took about 20 minutes. In looking at it now, I think I may have overdone darkening of the shadows. But that is the beauty of Lightroom, I can easily open the PSD file made by Photoshop and lighten up the shadows a little. Maybe I’ll do that if I ever decide to print it, but otherwise, it is ready to print now.

As always, your thoughts and comments are most welcome. 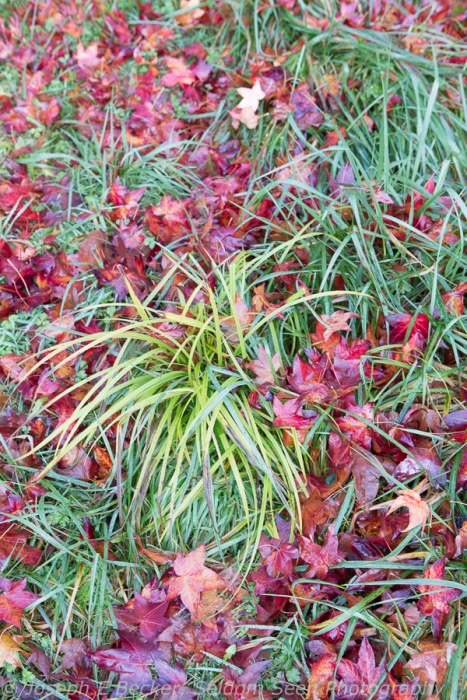 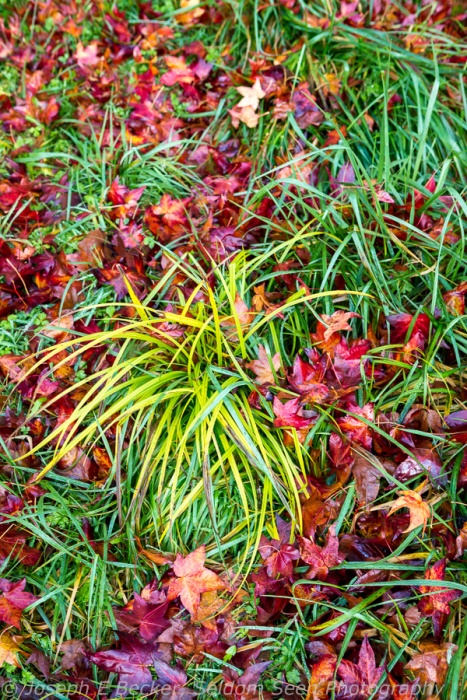 Initial processing in Lightroom prior to taking the image to Photoshop

Photos from the Land of Salmon 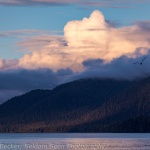 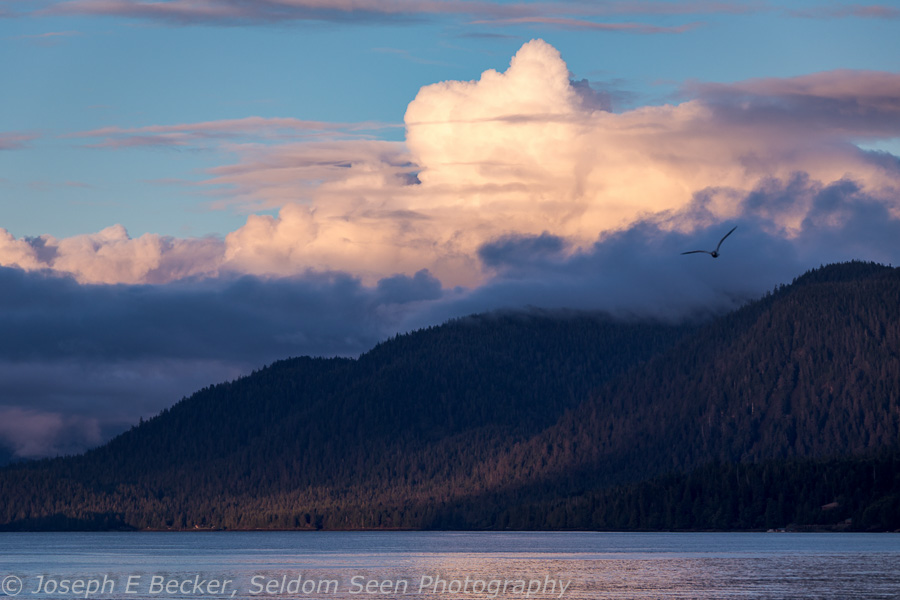 As I previously mentioned, last weekend I headed up to Alaska on a fishing trip. And most of my time was spent fishing rather than on photography. Weather was a major factor in keeping the camera in the bag – it rained four out of the five days I was there.

The trip was sponsored by Holt Services, a drilling firm we often use in my day job as a geologist. I was part of a group of 18, mostly geologists and drillers. Many fish were caught and much beer was drunk. We stayed at and fished from the Clover Pass Resort, about 20 minutes north of Ketchikan. The first couple days of fishing were not so good; I only caught on fish – a 10-pound coho (silver salmon). The last two days were much better; I caught nine coho. We saw plenty of wildlife as well, including bald eagles, Dall’s porpoises, gray whales, and seals.

Overall, it was a great trip, except for the limited photography opportunities. I didn’t get anything too special, but since I mentioned it in my previous post, I thought I should post a few images. So, without further ado, here are some shots from the land of salmon. 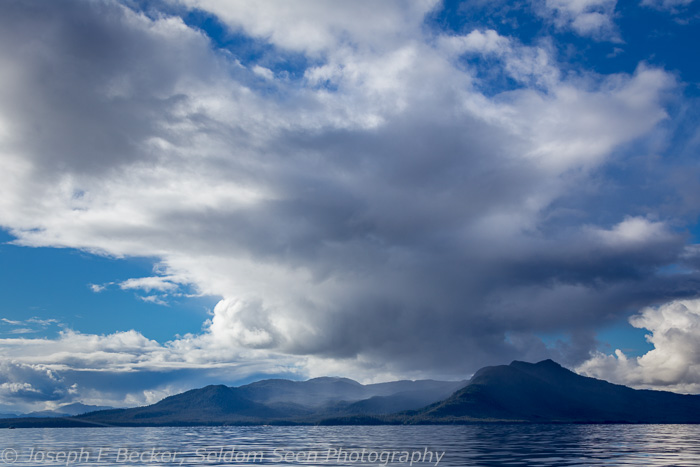 The first day we had good weather, with only scattered rain over distant hills. 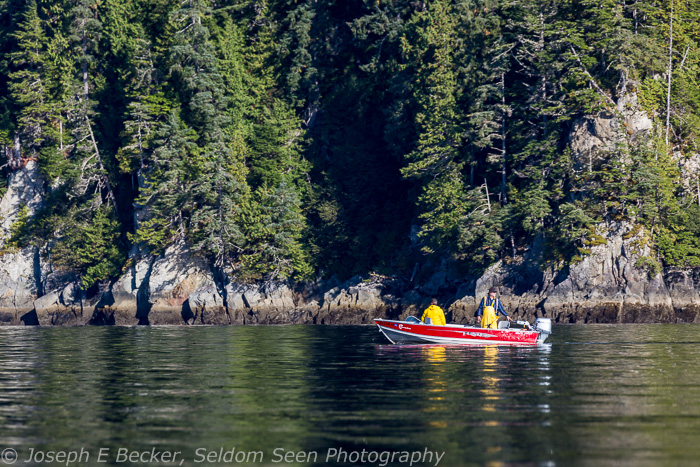 A couple nearby fishermen on that first day. 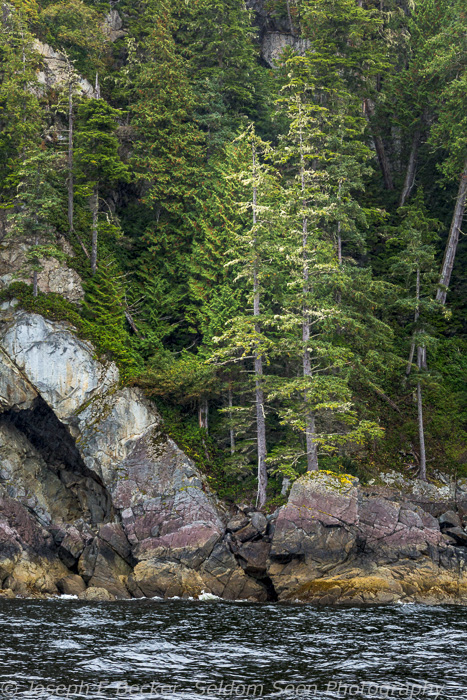 Most the shoreline was rocky and lined with trees. 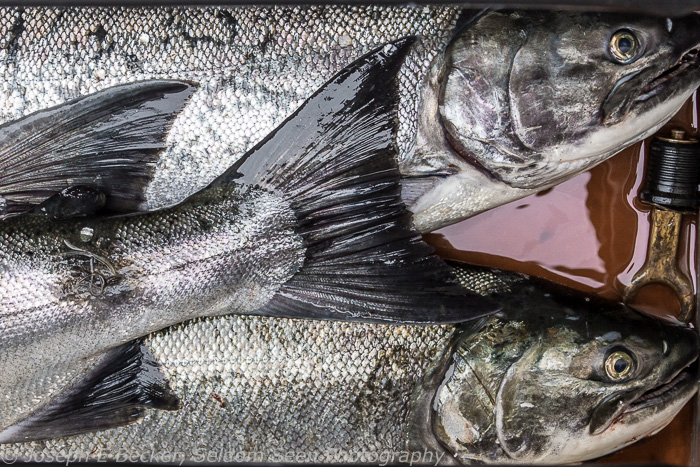 This was what it was all about – coho salmon. 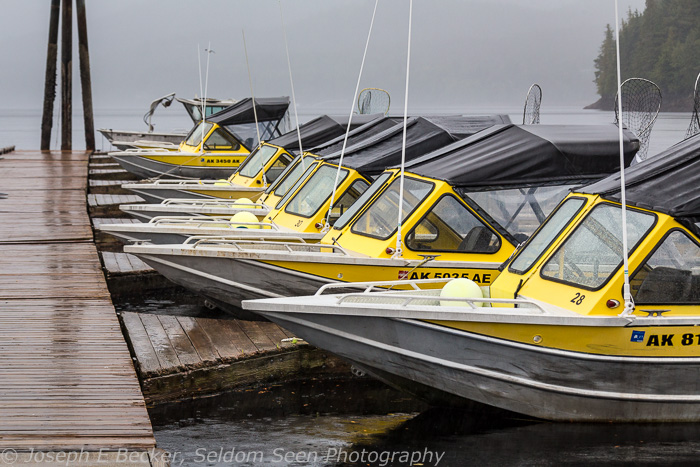 These were the boats we used to fish. My boat was #28 in the foreground. Note the rain and gray skies – a common feature for the last four days of my trip. 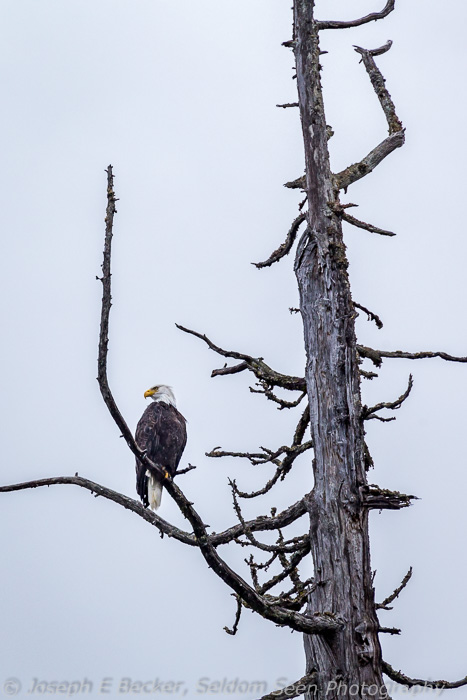 We saw plenty of bald eagles. 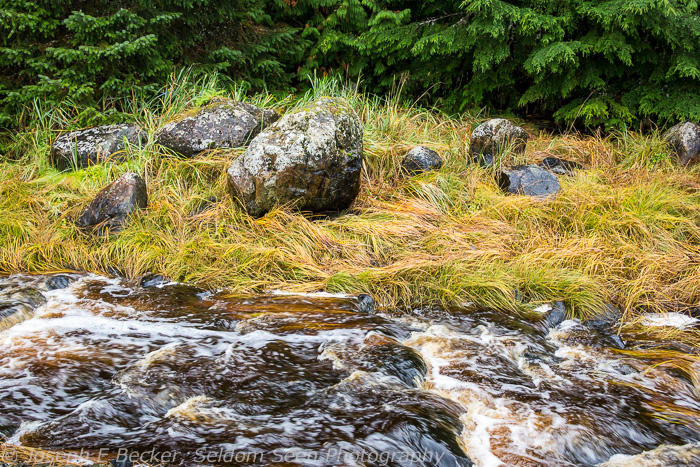 The streams in the area were full of tannins, making the fresh water almost brown in color.