Worst of 2015 and Lessons Learned

If you have followed my blog for over a year, you know that I have started a tradition of, rather than posting a best of the year, posting the worst of the year. Well, they probably aren’t really the worst of the year, those get deleted immediately, but rather are generally bad photos that weren’t total mistakes (such as accidentally tripping the shutter). These are photos I actually had some rationale to take, though when looking back, sometimes I’m not totally sure what that rationale was. You can find great looking photos all over the web (and perhaps even on my blog), but you can sometimes learn more from the poor images. That is why I present this bad images; they provide an education to me, and you perhaps. I’m a true believer in learning from one’s mistakes, though as you will see if you go back to the 2014 and 2013 posts, perhaps I need to keep re-learning some of the same issues over and over. So without further adieu, here are some of my worst of the year images from 2015 – both the images out of camera (with default Lightroom processing) and, in some cases, with Lightroom processing in an attempt to save them (though most are not worth saving).

What’s the subject? I don’t know! (straight out of camera)

In January 2015, Tanya and I went snowshoeing at Blewett Pass in the Washington Cascades. One image from that trip made the Robinson Noble calendar this year. The above image did not. In fact, looking back on this image, I’m at a loss as to why I took it. And it is underexposed. There is apparently no subject. Perhaps I was just happy to be out under semi-blue skies (as much of the trip to Blewett Pass was through rain). But if that was my motivation, it failed in the image. Lesson learned – most photos need a subject or at least something of interest; many feelings are hard to translate into an image, and I need to work harder (rather than just snapping away) if I want to show those feelings in my images.

Washington Monument bulls eyed with tracks in the snow (no processing) 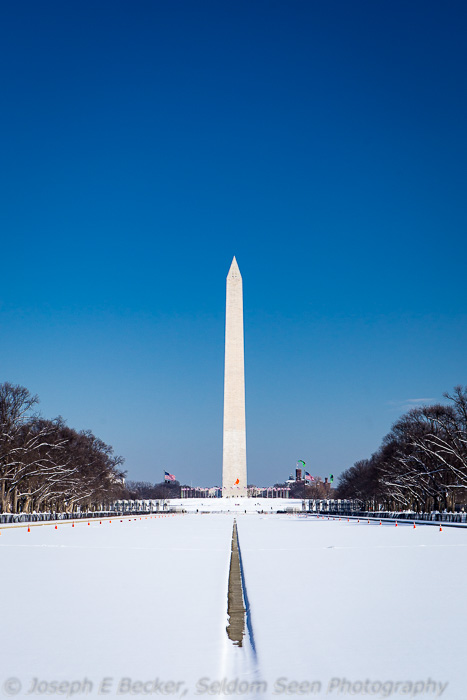 Cropped and processed in Lightroom.

February took me to Washington, DC. I hadn’t been there and many years and was excited to photograph on the mall. I took this shot of Washington Monument with the snow-covered reflecting pond. I’m not sure why I tried this composition, bulls eyeing the monument and including tracks in the snow. Not to mention being underexposed (starting to seem like a theme).  It was partly saved in Lightroom, but only with a significant crop. Lessons – 1) putting the subject dead center in the frame rarely works, and 2) look for distracting elements in the frame.

Look a rainbow! (no processing)

I have not horrible shots from March, largely because I barely took the camera out. But April brought this “gem.” I was photographing at the waterfront in Gig Harbor when a rainbow appeared. I had to get a good foreground for it, but this was not it. At least it wasn’t underexposed! After the excitement of seeing the rainbow wore off, I ended up getting a few better shots than this one. Lesson – when you see something exciting, don’t forget good composition. 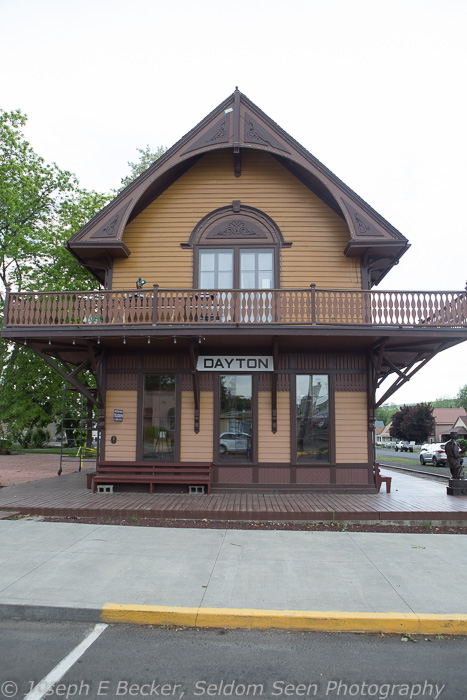 White skies in Dayton (no processing)

Since there is no March imge, I’ll give you two for May. The first are koi in a pond at the Chinese garden in Seattle. Fuzzy fish, small fish because I didn’t zoom in enough. Sorry, no processed version because there is no saving an out of focus image (I tried hand holding at 1/20 second, and it didn’t work). The second image, the historic train station in Dayton, Washington. But talk about a blown out sky! Again, no way to save that with processing. Lessons – 1) hand holding at slow shutter speeds usually doesn’t work – use a tripod or up the ISO, 2) when the sky is too bright compared to the subject, minimize it in the frame. 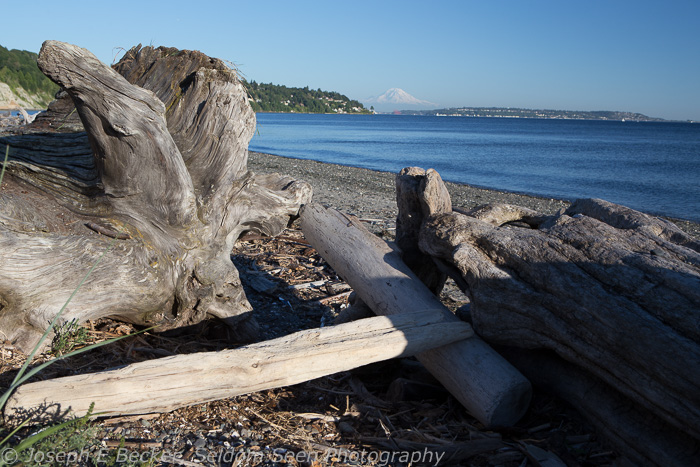 In June I went to Discovery Park in Seattle to take some images for my up coming book. This shot didn’t make it in the book. I was trying to show Mount Rainier along with driftwood on the beach. I was close to the driftwood and used a wide-angle lens. This made Mount Rainer look like a little white spot. Processing helped a little, adding a bit of definition to the mountain, but the image still belongs in the reject pile. Lesson – wide-angle perspectives shrink the background;  be sure to check the size of objects in the background if they are important to the image.

Another small white spot? No, that’s a bald eagle (no processing) 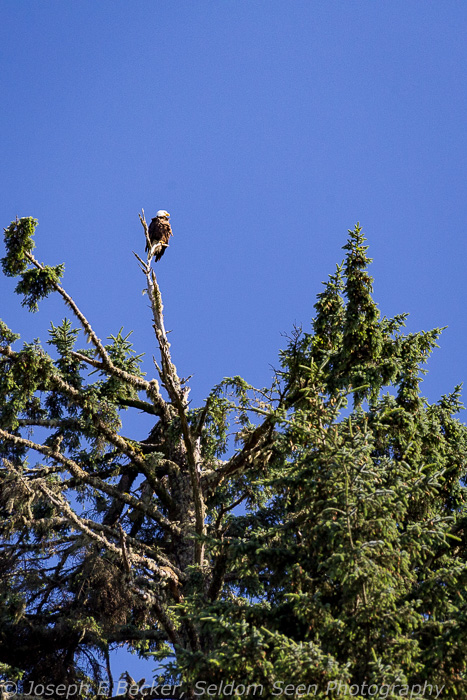 In July I went backpacking on the beach in Olympic National Park. There were a lot of bald eagles around, and I tried (and failed) to get a good shot of one. This was shot with my zoom maxed out at 300 mm. Still too far away. Even cropping in Lightroom doesn’t help much. Lesson – when shooting birds, you either need to get close or get some big glass. 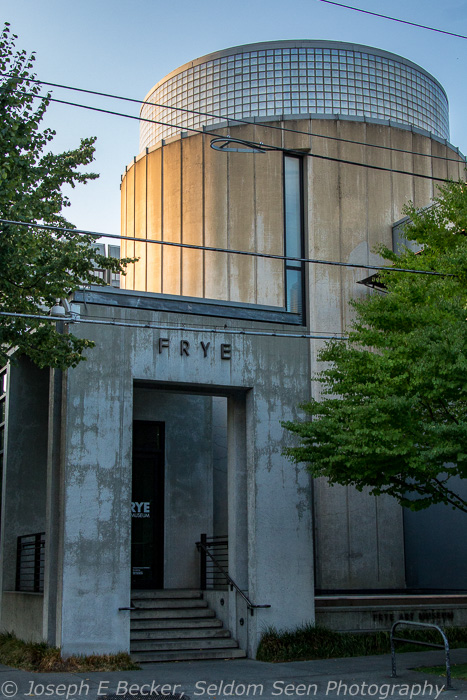 Looks better processed, but the wires are still there.

In August, I took some images at the Frye Art Museum in Seattle, again for my upcoming book. I like the glow of the setting sun on part of the building and attempted to capture that with this shot, partially blowing out the sky in the process. Was I really blind to those wires? At least I got most, but not all, of the street sign out of the shot. I was able to save the sky some with processing and remove the sign remnant with cropping, but only a lengthy session with the cloning brush in Photoshop could remove the wires. Not worth it. Lesson – sometimes there are too many distracting elements to make it worthwhile.

Bad exposure and out of focus (no processing)

September brought me to Alaska to do a little salmon fishing, where I took this shot. The only thing worst than the poor exposure is the bad focus – nothing is in focus in this shot. Seems my camera was set to a stop under exposure from a earlier image and I didn’t reset it. There is no processed version because Lightroom still doesn’t have an unsuck brush available. Lesson – 1) pay attention to your camera settings; if you make a change from your normal settings, reset it immediately; 2) pay attention to focus, it really is necessary!

Leaves in a creek, so what (no processing).

In October I was at Silver Falls State Park. I liked the leaves in the creeks, so made this shot. Do the leaves look like the subject to you? They sure don’t to me. After this failure, I took a few more compositions at the same location that were slightly better, but honestly, the whole series of shots will never be shown except here. I haven’t include a processed version because just like Lightroom doesn’t have an unsuck brush, it also doesn’t have an add-a-subject slider. 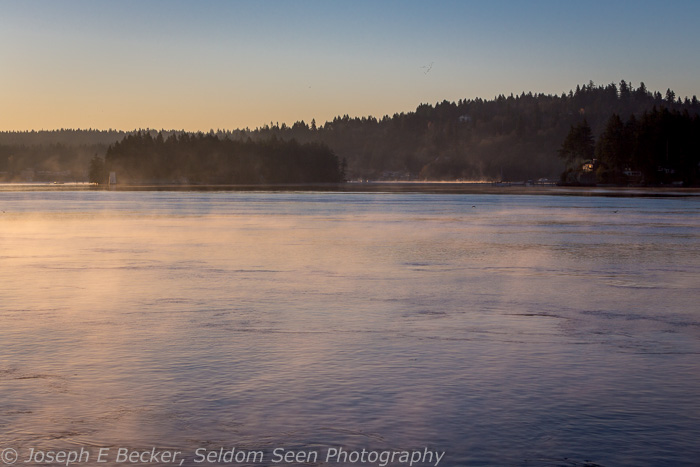 Processed in Lightroom does partially save the image.

In November I took some images of the sun rising over Mount Rainier from the Fox Island Bridge near Gig Harbor. Beside shooting the mountain, I liked the mist on the water and took this shot. It seems that underexposure was one of my major problems in 2015. Processing in Lightroom did save the shot, but the digital noise is worse than it should be. Lesson – exposure is actually important!

Here’s to a great year! (no processing)

My son, Brooks, and mother-in-law, Maxine joined Tanya and I on our trip to Europe last month. We started with a quick stop in Chicago, where this image was shot. Brooks and Maxine are toasting our the start of our vacation, and I captured the moment. Except for that underexposure thing again; oh, and the glass of beer in Brooks’ face; and oh, only Maxine is in focus. Processing helped the exposure a bit, but there is serious digital noise. Luckily, I realized my error and took a second shot that is much better. Lesson – really watch your exposure with backlit situations, and pay attention to where the beer glass is!

That’s it, a set of bad photos. Let’s hope that some of these lesson stick with me in 2016. I hope this new year brings you many wonderful photos (and that Adobe adds that unsuck brush to Lightroom).

This entry was posted on January 16, 2016 by joebecker. It was filed under Photo Processing, photography, Worst of the Year and was tagged with bad, lessons learned, photography, poor photographic technique, worst of the year.