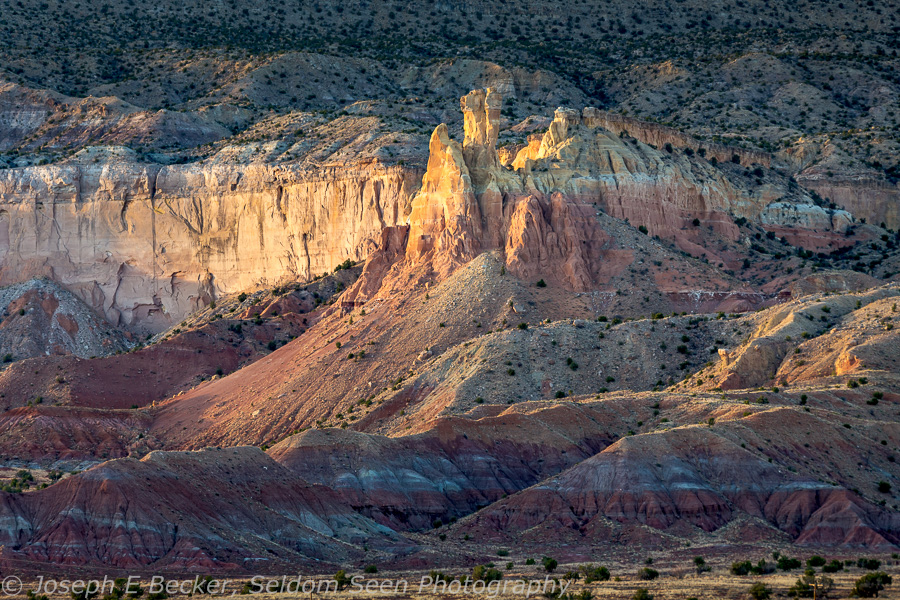 While in Santa Fe, Tanya and I visited the Georgia O’Keeffe Museum. We had missed it on our previous trip there, so we wanted to be sure to see it this time. We enjoyed learning about Georgia O’Keeffe and seeing some of her paintings, though quite frankly, both of us we disappointed that more of her work was not on display. That said, it is worth a visit if you are in the area and enjoy the work of this truly American iconic artist.

Non-flash photography is allowed in the museum, though some pieces are marked for no photography signs. Additionally, no tripods are allowed.

One of the issues of photographing paintings and other artwork is getting the color correct. Most museums, not just the Georgia O’Keeffe Museum, have title cards next the artwork that is neutral grey. To get the true color of the piece, also take an image of the title card. Then in Lightroom, use the color balance eyedropper tool to get the correct color balance. Copy the color balance to the image with the artwork, and instantly the colors in the artwork are correct. For more on this technique, see my earlier post on the subject.

Our first stop was Plaza Blanca, or, as Georgia O’Keeffe called it, the White Place. Plaza Blanca is a spectacular set of white limestone cliffs, small canyons, and hoodoos just north of Abiquiu. To reach the White Place, driving west out of Abiquiu on US Highway 84, shortly after passing over the Rio Chama, turn right on County Road 155. After a mile or two, this good dirt road becomes paved. Shortly after the road becomes paved, turn left on a dirt road through the gate for the Dar al Islam . When the road splits, stay right and come to a small parking lot. The White Place is a short walk down the hill.

Unfortunately, we didn’t have time to explore Plaza Blanca in detail as it was already late afternoon and I wanted to the Ghost Ranch before sunset. The Ghost Ranch is about 10 miles north of Abiquiu on US 84, and while driving there, we stopped to take some pictures of the badlands and red rock cliffs along the highway a mile or so before the turn off for the Ghost Ranch. There is also another spot worth noting between Abiquiu and Ghost Ranch. The highway between Abiquiu and Ghost Ranch climbs up out of the Rio Chama valley west of town. At one point, there is a pullout with a good views of the Rio Chama both looking back to Abiquiu in one direction and toward the mountains in the other. We stopped here on our way back from Ghost Ranch during the blue hour.

Today the Ghost Ranch is an education and retreat center owned by the Presbyterian Church. But you need not be a church member or go on a retreat to visit or even stay there; all visitors are welcome. When arriving at the Ghost Ranch, visitors check in at the Welcome Center. There is a $5/person fee for day visitors. You can also join in at meals in the dining hall (for a small additional fee) or even stay overnight if not full (reservations are available).  For visitors not partaking in a retreat or organized educational event, the day pass offers access to hiking trails, the ranch’s museums (an anthropology museum and a paleontology museum), restrooms, trading post, and the rest of the campus grounds.

I had very little knowledge of the Ghost Ranch, other than it was a good place for photography, prior to our arrival. The Welcome Center was closed when we drove up, but a woman was just leaving the building as we got out of the car. It turns out she was the Executive Director of the ranch. She suggested a couple hikes, invited us to dinner at the dining hall, opened the Welcome Center to let us use the restrooms, and told us a bit of history about the ranch. Apparently, the ranch was originally owned by a pair of cattle rustlers and thieves, who kept their pilfered livestock in a box canyon on the ranch. To keep people out, they told stories of evil spirits that haunted the area. This led to the original name Ranch of the Witches which was eventually changed to the Ghost Ranch. Arthur Pack, an east-coast conservationist, purchased the ranch in the 1930s. He sold a small piece of it to Georgia O’Keeffe, who kept a studio there and painted many of the Ghost Ranch landscapes. Pack donated the ranch to the Presbyterian Church in the 1950s to be used as a retreat center.

The ranch is set at the base of a series of red-rock cliffs and small canyons and badlands, quite reminiscent of much of southern Utah. Its most famous geologic feature is Chimney Rock, an orange and red sandstone spire jutting out from a cliff face (shown in the featured images above, as well as one image below). Tanya and I did about half of the Chimney Rock hike, far enough to get a good photograph (the one below). Based on the angle of the setting sun, which was backlighting the formation, we didn’t complete the hike so I could get a better shot entrance road to the ranch. The image above was shot just before sunset along the entrance road, next to an old log cabin (which Tanya explored while I took pictures).

In all, we spent less than half a day exploring the Georgia O’Keeffe country around Abiquiu. From this short outing, I know I want to go back for more. 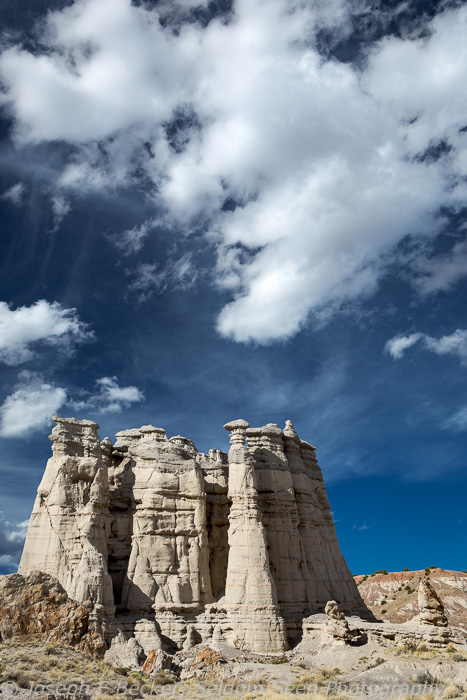 Some of the white limestone formations at Plaza Blanca

Red rock formation along US Highway 84 near Ghost Ranch

Cattle skull on the Ghost House at Ghost Ranch 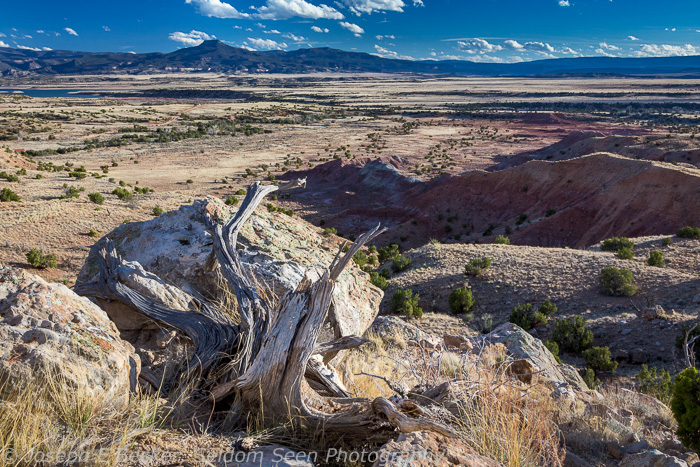