Thanks to a Broken Snowplow 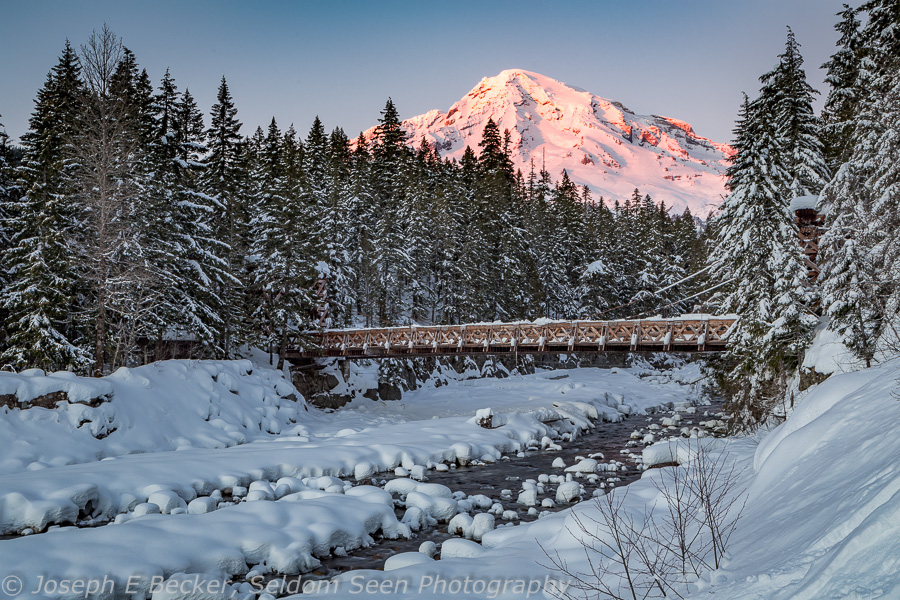 I can’t count the number of times I’ve been through Longmire in Mount Rainier National Park; dozens at least, maybe a hundred times over my life. Usually I drive right past on the way to Paradise, but even so, I have stopped many times over the years. The main reason I usually don’t stop at Longmire is that I’ve always considered the view of Rainier to be, frankly, not so good. I’m sure it was great then they built the lodge, but it’s my supposition that over the years, the trees have grown up around Longmire meadow, blocking much of the view of the mountain. Additionally, if you shoot from the lodge, the road runs through the foreground.

Last week I discovered I was wrong. Longmire has a great view of Rainier! Perhaps this is old news to everyone out there whose ever been to Mount Rainier National Park, but it was news to me. Last week my photographer buddy, Mark Cole, and I went to the park to go snowshoeing and take a few pictures. We stopped at Longmire, not because that was our destination (we had planned on going to Paradise), but because the road to Paradise was closed due to the snowplow needing a replacement part. I was resigned to the fact that our photography would be limited to snowy forest scenes, perhaps a few shots of the Nisqually River, and maybe a view of Rainier from the Rampart Ridge trail if we decided to snowshoe it.

We stopped in to talk to the ranger, largely to see if the road to Paradise would open later that day, but we also asked about where to snowshoe at Longmire. We mentioned the main purpose of our outing was photography. He told us about Rampart Ridge, but said the best view of Rainier was at the Community Building right in Longmire. Both Mark and I had never heard of the Community Building nor the road to it. The ranger told us of a road which travels through the employee living area, crosses the Nisqually River on a suspension bridge, and runs down the south bank of the river to the Community Building (and a short distance beyond).  We drove to the Community Building and couldn’t believe our eyes, the view of the mountain was awesome. Some of Longmire’s buildings are visible on the north bank of the river, but by wandering along the river, and through careful composition, the buildings can be eliminated from a photo. The bridge is also in the view, but it is pretty scenic, so I kept it in my compositions. I’m not sure what the view looks like here without snow, but with snow, it is great.

We ended up spending an hour of more there, snowshoeing along the river, taking photos of the mountain from several different locations. By the time we finished, we didn’t have enough daylight left to do the Rampart Ridge loop, so we wandered up the Wonderland Trail toward Cougar Rock looking for more shots of the river. But as sun set approached, we again crossed the bridge at Longmire and took shots of the alpenglow on Rainier with the river and bridge in the foreground.

Thanks to a broken snowplow, I discovered the Longmire does have a great view. Who knew? 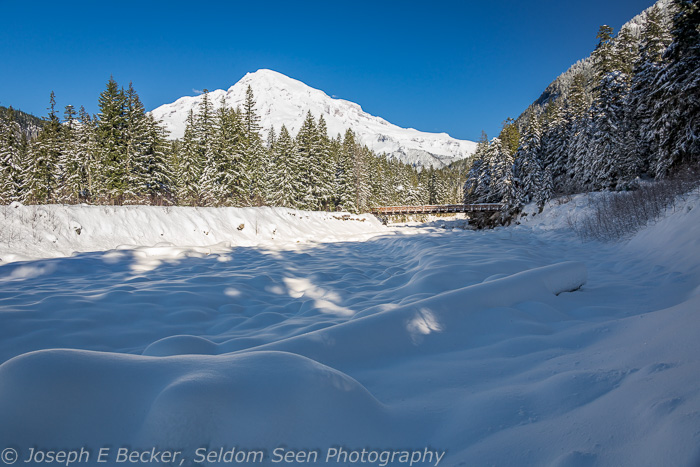 This is the view of Mount Rainier from near the Community Building from along the Nisqually River. The aplenglow photo at the top of the post is from nearer to the bridge where less of the mountain can be seen.