Winter just seems never to end. We’ve had nothing but a cold, rainy March so far. So what should you do when bored and stuck inside on a rainy winter day? Try your hand at scanography – photography using a flat-bed scanner. If you don’t already own such a scanner, you can often find them cheap at a second-hand store. The images shown here were taken with my Epson Perfection 2450 Photo scanner that I purchased several years ago at Goodwill for $5. The trick is getting such a scanner to run on your computer – often drivers are not available for newer versions of Windows. For example, Epson offer a driver for my scanner for Windows version after XP.

I’m running Windows 7. When I first got the scanner several years back, Windows 7 was still fairly new. To get the scanner to work, I did a Google search on Windows 7 drivers for my scanner model. I discovered that a different Epson model had a driver that worked, so I downloaded that and sure enough, it worked.

Now skip ahead a few years. I tried Widows 10 and decided to go back to Window 7, but when I did so, I lost the driver for the scanner. Well actually, I still had the driver, but Windows would not allow me to install it because it was “unsigned.” This is a case of the software trying to protect your computer from malignant software. I get it, but I really did want to use the scanner again. Finally, after several long Google searches, I discovered there is a way to get Windows to install unsigned drivers. You must first disable the driver signature enforcement, then install the driver. It wasn’t that hard to do, and sure enough, I was back in business.

Since if you pick up a cheap, used scanner, it probably won’t be the same model as mine, I suggest the following. First, go the the manufacturer’s support site and see if there is a driver available. If so, your golden. If not, search Google for an alternate driver. For example, in my case, the Google search might be: “windows 7 driver for epson 2450 scanner”. There is a good chance this will give you a driver that will work. However, if it is unsigned, you still will need some help installing it. So try this Google search: “installing unsigned drivers windows 10”. You will get a number of results that explain how to install unsigned drivers. Good luck!

Once you do get your scanner installed, it’s time to have fun. All of the images here were taken using the scanner. The fun thing about using a scanner for photography, of scanography as it is called, is that you can create interesting effects because the scanner captures an image a line at a time. This means that as the scanner light and sensor moves, you can move your subject either blurring it or making it appear more than once in the frame. I found this is particularly fun for self portraits (just watch out for fogging the glass with your breath).

I found that scanning to TIFF files worked better than to JPGs, but your experience may be different. Once the files are created, I imported them into Lightroom and treated them just like any other file, optimizing them as I saw fit. I found the biggest problem is dust. I’m use to a few dust spots from my camera sensor. With the scanner, you can get hundreds of dust spots, all perfectly in focus. So be sure the clean the glass well when doing your scanography.

Wondering what kind of images you can make with a scanner? My samples here will give you a few ideas. If you want more, just do a Flickr or Google image search for scanography. There is some very creative work out there. 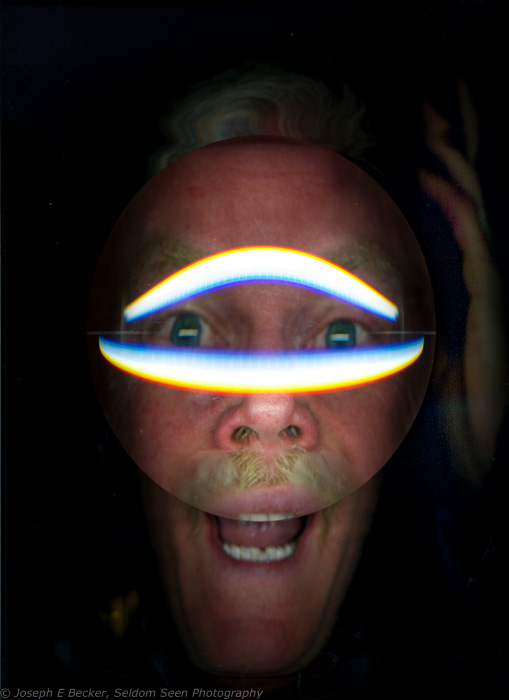 This entry was posted on March 11, 2017 by joebecker. It was filed under camera equipment, Hints and Advice, Improvisation, Photo Techniques and was tagged with flatbed scanner, photographic technique, photography, scanography.