I recently returned from our quick trip to Utah. While there, I spent several hours in the middle of the night doing some Milky Way shots at Devils Garden in Grand Staircase – Escalante National Monument (a fantastic place that I love and that my so-called President is trying to take away). I arrived at the Devils Garden parking lot at about 1:30 am on a weekday morning. I obviously wasn’t the only one with the idea of shooting there that night, as the parking lot had five other cars parked (by comparison, I took Tanya and our friends Jim and Kris back there later in the morning – around 10 am – and there were only two other cars there).

Devils Garden is a fairly small area filled with wonderful hoodoos and several arches. And I was a bit surprised by the number of photographers there there, but figured if everyone was polite with their lights, we could all get along. I headed toward one particular set of four hoodoos shaped like heads from Easter Island that I thought would look great with the Milky Way and some light painting. However, there was a group of people already working there. So instead, I went to Metate Arch and shot the image above. I did my light painting with a LED headlamp covered with an orange gel. I was pretty happy with the result, and hoped the other folks had moved on to another spot so I could capture the “Easter Island” hoodoos. But no, they were still there.

Light pollution caused by other photographers. Red light in lower center and light painting and flashlight spot in lower left.

I talked briefly with another photographer, asking him if my light painting had hindered him, but he said no. He was not with the group by the Easter Island hoodoos also wished they would move. He had been photographing some hoodoos near Metate Arch, and we traded places. I had some trouble shooting this spot, the group down by the Easter Island hoodoos was in the corner of my composition and they rarely turned off their lights. Further the photographer now at Metate Arch was occasionally using his light, and that was partly in my shot as well. Between the two, I took five shots, none without some light from the other photographers – especially the group by the Easter Island hoodoos – whom it seemed when they finished with light painted, turned on red lights and keep them on until they started light painting again (for those who don’t know, when out doing night photography, using a red light helps keep your night vision). Rarely did they have both their normal and red lights off. The image shown here is the best of the lot I took – there is some red light from the photographer by Metate Arch (lower center) and the light on the Easter Island hoodoos (down in the lower left corner) isn’t too bad. I was able to use Photoshop to fix the image (see below), getting totally rid of the red light in the center, removing the light spot in the lower left, and dimming the rest of the light in the lower left (I thought it looked better with a little light there rather than making it totally dark). I am happy with the result, but by now I was starting to get a bit mad at the rudeness of the group down by the Easter Island hoodoos, who almost always had one light or another on.

I ended up photographing three other spots, two of which are shown below, in total spending about two hours at Devils Garden. I never did make it to the Easter Island hoodoos as the light-happy group of photographers there never left the spot. And frankly, even now, days later, I’m still a bit peeved at that selfish and rude group.

Aside: rant directed at that group of photographers: seriously people, would you sit in the front row of a movie theater and talk on your cell phone for the entire movie? Do you enjoy shining your flashlight in other people’s eyes at night? Do you never turn off you high beams when other cars approach on the highway? And it’s not just the lights. It’s hogging the spot. It’s one thing to arrive early and setup at a preferred spot for sunrise – sunrise only last 10 or 15 minutes. But honestly, 2 hours without moving at a place that has dozens of potential shots? Have you no creativity? Obviously not! How many shots of the same set of hoodoos do you need? I suppose you never learned to share your toys when you were a kid either.

Image above with light pollution removed in Photoshop 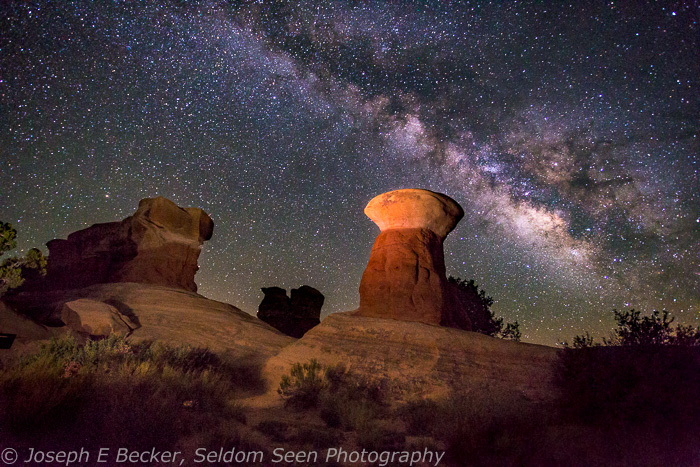