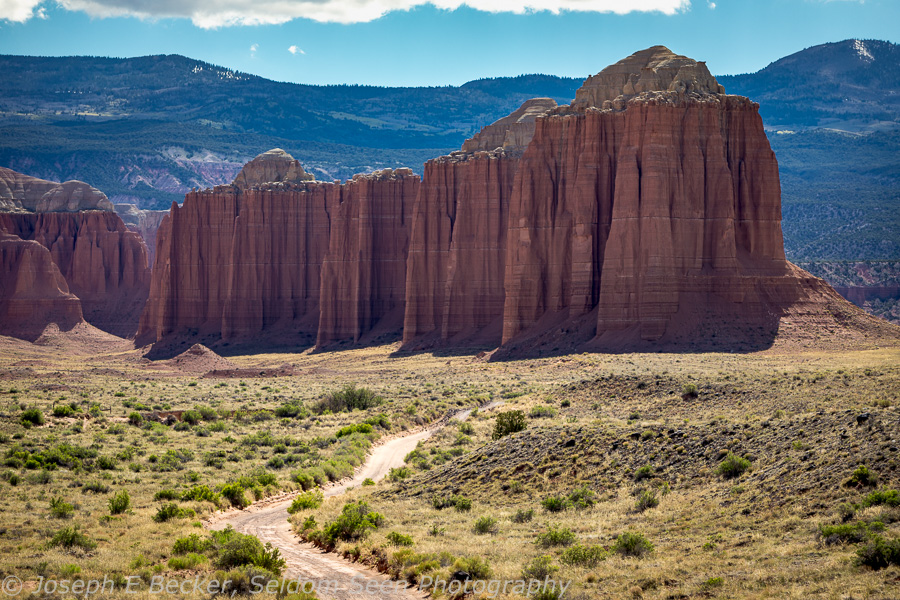 In the half a dozen trips I’ve previously made to Capital Reef National Park, I was enthralled by descriptions of Cathedral Valley and knew I had to go there. However, until last month, I had never made it. Cathedral Valley is in the northern portion of the park. Park. There is a loop road through the valley, traversing both Park and BLM land. A high clearance vehicle is a must, 4-wheel drive is optional, but nice to have. The road is impassable if wet. In my previous trips to the park, I either had a car without the required clearance, or the weather didn’t cooperate. During my trip last month, I was determined to make it into the valley.

At first, it seemed like fate would prevent me from seeing Cathedral Valley once again, thanks our rental-car company. Tanya and I flew into Salt Lake and met up with our friends, Jim and Kris, who had flown in earlier that day. I had reserved a Jeep Grand Cherokee with Fox Rent-a-Car, picking that vehicle specifically for its high ground clearance. We got the Fox counter about half an hour after the plane landed, and there were two parties in line ahead of me. They gave the person two ahead of me a Grand Cherokee. When I got up to the agent, they said they didn’t have any Grand Cherokee’s left (having just given the last one away). Instead, they offered a Dodge Journey, which they claim was the same class of car (it is not, the Journey is a crossover, not an SUV). I was not happy. Tanya went through their parking lot looking at which cars had the highest ground clearance. We ended up with a Jeep Patriot, which had more ground clearance than the Journey, but not as much as a Grand Cherokee, nor is it as large. With 4 people and luggage, it was a bit of tight fit. But luckily, as I found out, the Patriot worked well on the Cathedral Valley road (later in the trip, but not in Cathedral Valley, we could have used the extra ground clearance, as we bottomed out a couple times).

Abandoned drilling rig in Blue Flats, the Henry Mountains in the background.

After securing the car, we drove down to Teasdale, Utah, where we had an Airbnb booked for that night. Teasdale is immediately west of the town of Torrey and about 12 miles from Capital Reef. The next morning the sun was bright and the forecast was for clear skies and no rain – perfect for a Cathedral Valley drive. We drove into the park and stopped at the visitor center. It was a zoo, loaded with tourists from across the globe. But we would leave 99% of them behind by driving to Cathedral Valley. We purchased the road guide ($2.95 and well worth it) and set off. The road guide describes 41 historic, geologic, and/or scenic stops along the 96 mile (from the visitor center back to the visitor center) trip. The Cathedral Valley loop road itself starts at mile 11.7, and the first “stop” is the Fremont River ford at mile 12.2. The river was running at about 12 inches depth that day (according to the ranger at the visitor center), and we had little difficulty driving across the river even though I missed the shallowest part.

From there the road traverses up some hills into a broad valley called Blue Flats. In the middle of the valley is an old, abandoned well drilling rig (next to the last well it apparently drilled; the artesian well providing a flow of several gallons per minute). Jim and I found this most fascinating, as we are both groundwater geologists and often work with drill rigs in our day jobs. From there the road climbs out of the valley through the Bentonite Hills. Bentonite is a form of clay, and here for sure, the road would be impossibly slick to drive if wet. Bentonite also forms lovely rounded, colorful hills and badlands, and it was a delight to the eye to drive through this part of the road. 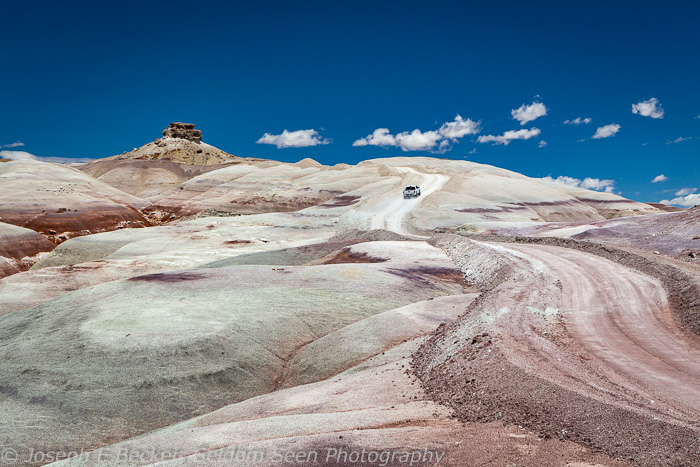 Here is the road as it climbs through the Bentonite Hills.

From there, the road continues climbing and eventually enters the national park, where there are several viewpoints of the lower South Desert, a scenic valley to the southwest of the road. The road continues to an overlook of upper Cathedral Valley, with a great view of a series of monoliths in the valley below. The monoliths are reminiscent, and about the same size as, cathedrals – thus, I believe, the name of the valley. Near this viewpoint is a campground with six primitive sites.

The road then drops down into Cathedral Valley proper. There are a couple trails in this part of the valley, a short trail to a historic cabin and a 1.1-mile trail to provides up close views of the monoliths. Due to the time of day, and a pending dinner reservation at Cafe Diablo (great restaurant) in Torrey, we declined to take the trails and kept going. Here the loop road turns back to the east as it traverses the valley floor, magnificent valley walls all around. After passing some volcanic dikes – black vertical rocks that have cut through the older sedimentary rocks of the valley – there is a short side road to the Gypsum Sinkhole – an unusual, large, deep hole in the ground at the base of cliff where water dissolved away a gypsum dome.

The road leaves the national park, but another short side road takes you back in. This road takes you to Glass Mountain and the Temples of the Sun and Moon. Glass Mountain isn’t really a mountain, but a large mound of selenite crystals. Selenite is a form of gypsum, and the mound is similar to what was formerly at the Gypsum Sinkhole prior to the sinkhole forming. Nearby are the Temples of the Sun and Moon, two large and impressive monoliths in the middle of the valley floor. The road takes you to base of each. We saw several people camping just outside the park boundary on this road – a perfect spot to camp if you want to capture sunrise light on the two Temples. Not such a great spot if you want shade.

The main road continues through BLM land, offering more primitive camping spots with great scenery, including the dramatic Cainville Mesas. At mile 77.3, the road returns to the highway, about 18 miles east of the visitor center.

Cathedral Valley is a landscape photographer’s (and geologist’s) heaven. Photographically, the best way to capture it would be to camp along the loop, either in the small campground in upper Cathedral Valley or off the road in the BLM section, allowing you to be in the area during the golden hours. Even if you cannot camp along the loop, the road is well worth traveling (provided you have a high clearance vehicle and there is no rain in the forecast). Laurent Martries, in his book Photographing the Southwest, Volume 1 – a Guide to the Natural Landmarks of Southern Utah, proclaims Cathedral Valley as “one of the most remarkable spots on the planet.” I have to agree.

View into the South Desert valley 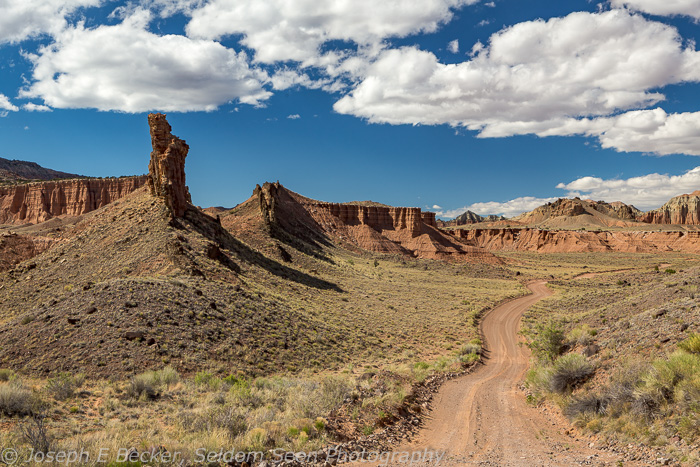 Tanya at the Gypsum Sinkhole. The hole is about 50 feet across and 200 feet deep. We spotted a crashed drone in the bottom of it.

More bentonite hills, as the loop road heads eastward on our way back out to the highway 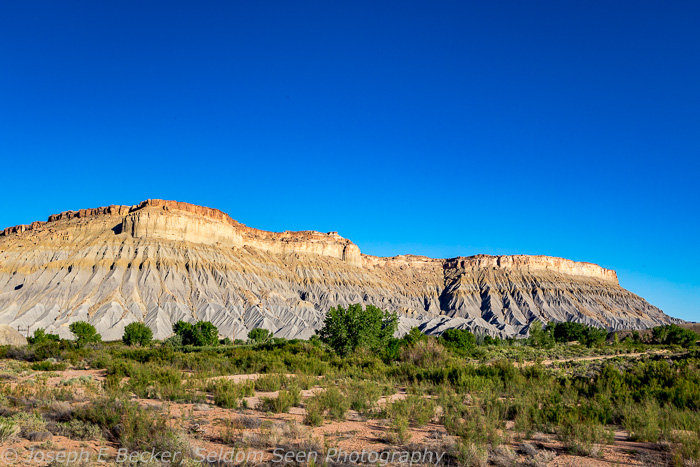