My Take on the Eclipse

My original plan was not to shoot the recent solar eclipse. The day of the eclipse, I was scheduled to start a backpacking trip in Kootney National Park in British Columbia. But with the wildfires raging in Canada, that trip got canceled, and my brother and I decided to go to the Wind River Range in Wyoming instead. I didn’t even realize we would be near the path of totality under after we made arrangements to go (and was trying to find a motel room for the night of Sunday August 20th). So we made a minor change of plan – camping along a National Forest road instead of a motel and starting our backpacking trip in late afternoon instead of mid-day – so that we could observe (and photograph) the eclipse.

Our backpacking trail was slightly south of the path of totality, so we planned to camp the night before in the Bridger-Teton National Forest near Jackson, Wyoming prior to hitting the trail. It took us a while to find a spot to set our tent, as there were many people with a similar camping idea, but we found a nice spot at the intersection of Granite Creek with Little Granite Creek, which is also the intersection of two Forest Service roads. Unfortunately, however, it seemed like every 20 minutes or so throughout the night another car or truck would come driving up the road and stop at the intersection to decide which way to go – stopping such that their headlights shone directly onto our tent. So much for a peaceful night’s sleep.

It was frosty in the morning, with a few clouds. But these cleared off and the temperatures warmed as the eclipse drew near. We set up above Granite Creek, a half mile south of our camp site,seemingly having the whole landscape to ourselves, at least until after totality was finished – all those cars stayed wherever they had ended up in the night until after the total eclipse was over, when there was a slow, but steady exit along Granite Creek Road.

I shot with two cameras – my Canon 50D equipped with my 28-300mm zoom set at 300mm, and my Canon 6D with my 17-40mm zoom set at 17mm. I was using the wide-angle lens to get a shot of the landscape during the eclipse. I had a solar filter on the telephoto lens, and used a neutral-density filter on the wide-angle lens (combined with an f/22 aperture and fast shutter speeds) for the partial phases of the eclipse. During totality, the filters came off, and the camera settings changed to reflect the deep twilight type conditions. I bracketed like crazy as well.

During the partial phases, I took bracketed shots with both cameras about every eight minutes, using an intervalometer on the 6D and manually operating the 50D whenever the 6D shot. The bracketed telephoto shots look pretty good. However, most the bracketed shots with the wide-angle lens are underexposed (even though I was solely trying to shoot the sun and not the landscape).

Just as the eclipse started going total, things started hopping. First, my 50D started flashing a battery dying warning. I was prepared, with extra batteries for both cameras in my pocket. However, the timing was horrible. Cursing, I pulled the battery out of the 50D and tried to stuff a new battery in. It wouldn’t go. Cursing louder, I tried again. No dice. It was the battery for the 6D! Quickly pulling out the other battery out of my pocket, I slipped it in the camera, turned the camera back on, pulled off the solar filter, re-found the sun in the viewfinder, and shot off several sets of bracketed frames.

I paused briefly between cameras to look up at the eclipse with my own eyes. Amazing – like a hole in the sky with heavenly light radiating out of it! The landscape dark, like deep twilight, the sky a very dark blue. The temperature rapidly dropped to the point where it was cold without a jacket.

Then back to the work. I pulled the filter off the 6D and reset the exposure for the landscape. Unfortunately,though at the time I didn’t know it, I once again shot underexposed, even with the bracketing. To get the final image I wanted, I also rotated the camera to the left and right for shots to be later combined into a panorama.

And then, just like that, totality was over. The total eclipse lasted about one and half minutes, but it seemed much quicker. I reset the 6D back to its original position and continued shooting every eight minutes until the partial eclipse was totally over, about 85 minutes later.

My plan was to capture all phases of the eclipse to put together composite images, one with the closeup images and one with the wide-angle images. The telephoto images went together (in Photoshop) without much problem (see below). The wide-angle images are another story. Being underexposed, the landscape needed to be lightened, and there is a fair amount of noise in it. Luckily, with the sagebrush and evergreen trees texture, the noise is not too obvious. Combining the 3-shot panorama didn’t work so well either. Lightroom (which I normally use to make panoramas) wouldn’t do it, so had Photoshop put it together. I wasn’t happy with Photoshop’s auto masking of the three images, so I modified them myself. Then there was the issue of putting in all the separate images of the partial phases. Though small in the frame, the wide-angle distortion made the sun in each of these images quite distorted. While it was fairly easy to correct the distortion for a single image, making the sun round again, correcting it in each of the successive images and then setting the multiple sun images in the correct spots in the composite proved difficult. To solve this issue, I used the wide-angle images of the partial eclipse to indicate the correct position of the sun, but then overlaid greatly reduced in size images taken with the telephoto lens on the distorted wide-angle suns. The final result is shown above. It was a lot of work, but I think it came out well.

Overall, it was an amazing experience, and I was very happy we decided to go to Wyoming instead of smoky British Columbia. And I learned a few lessons about exposure and photographic technique in the unlikely event I ever photograph another total eclipse. Your comments are welcome, as always. And, if you had the opportunity, let me know how your eclipse watching went. 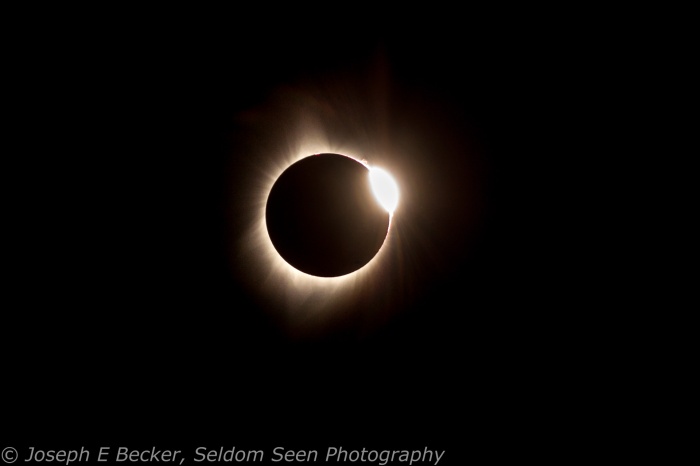 This one, cropped way in to for detail, shows some solar flares

Just a shot of the total eclipse with 300 mm on a a 1.5x cropped sensor, then cropped a bit more in processing; notice the star visible as well in the lower left hand corner 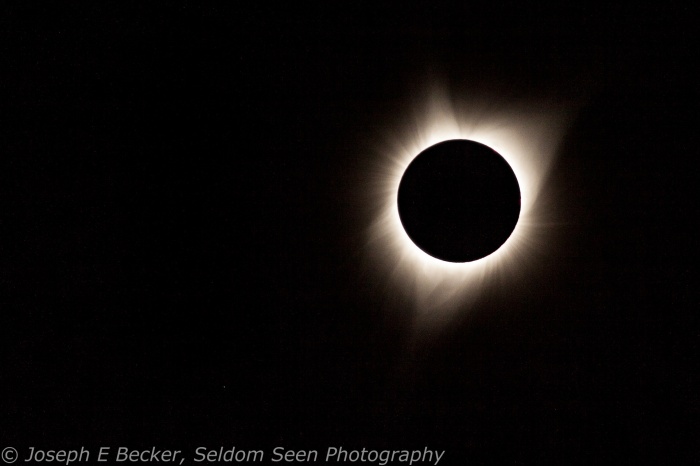 Another shot of the total eclipse

This entry was posted on September 2, 2017 by joebecker. It was filed under photography, Travel Photography and was tagged with Bridger Teton National Forest, Granite Creek, solar eclipse, sun, Wyoming.