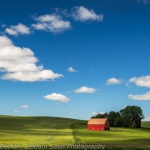 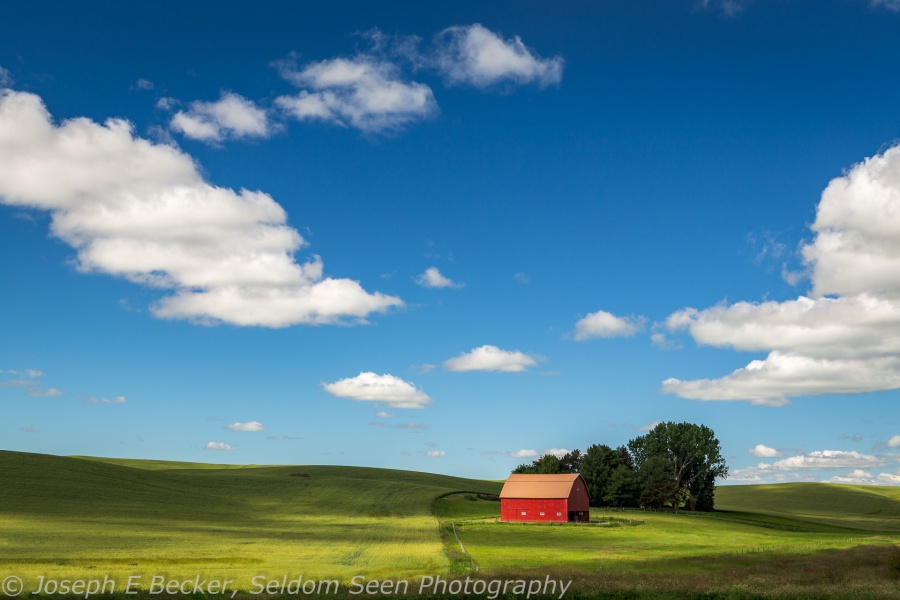 One thing I like about the Palouse is there are still plenty of good shots to be made outside the golden hours. Granted, when photographing in the region, I still aim to shoot in around sunrise and sunset, but I keep shooting well into the day. I captured all the images presented here more than four hours after sunrise and more than four hours before sunset – in other words, in the middle of the day. And maybe some of them might be better if shot during the golden hours, but I think some are pretty good anyway. Perhaps some might even be photographic gold?

It’s great to be able to capture a few good shots outside the golden hours, because in mid-June in the Palouse, the sun rises very early (a little before 5 a.m.) and sets quite late (just before 9 p.m.). This makes for a very long day. My normal schedule for shooting in the Palouse is to: get up early and catch sunrise, then drive around shooting and scouting until about 11 a.m.; eat lunch; return to my motel and plan the afternoon/evening shoot; take a nap; head out again shooting/scouting starting about 3:30 or 4 p.m.; shoot sunset; drive back to the motel, plan the morning shoot, and go to bed.

There are a couple of reasons why the Palouse can offer photographic gold during the non-golden hours. First, is the tendency for the skies to have white puffy clouds in the afternoon (and sometimes in the morning). The shadows cast by the clouds can give definition to the landscape, breaking up the flat light of mid-day. Secondly, there are plenty of subjects available that work well at almost anytime of day.

Now, I wouldn’t recommend making a trip to the Palouse and ignoring the golden hours, but if you decide you don’t want to get up at o-dark-thirty some morning, know there are still some decent photography waiting for you out there. As always, your comments on my musings and/or images is most welcome. Enjoy these shots of mid-day Palouse. 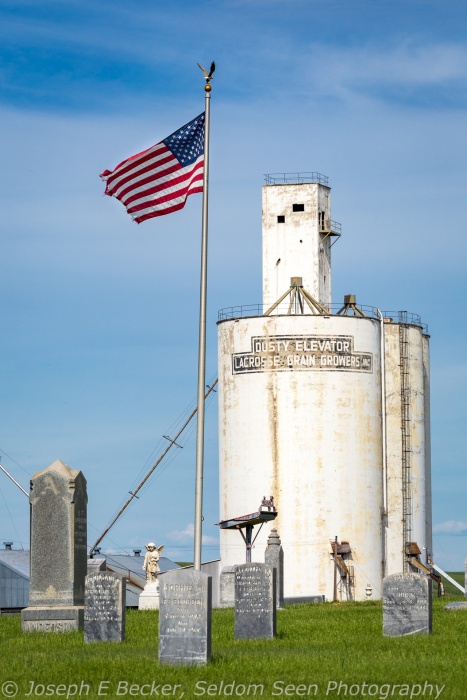 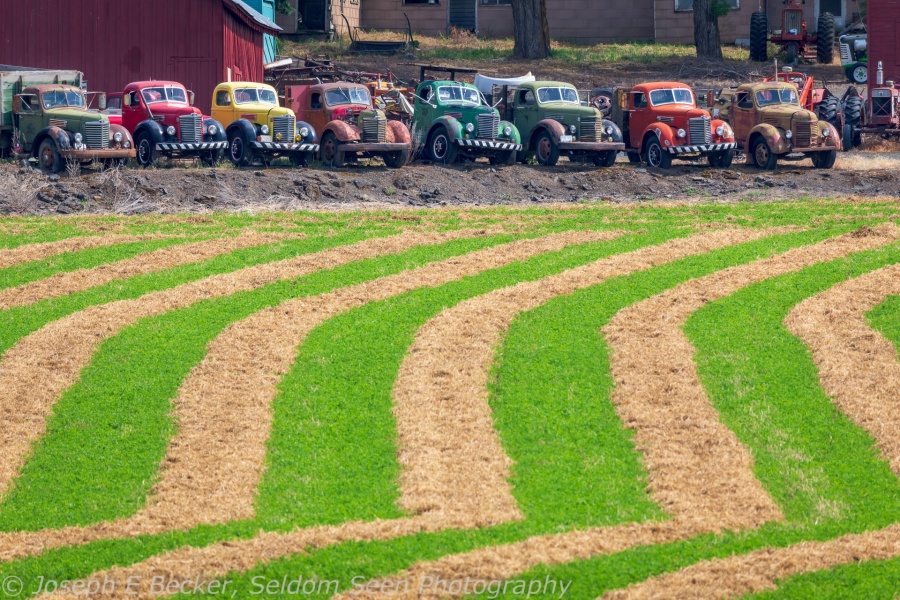 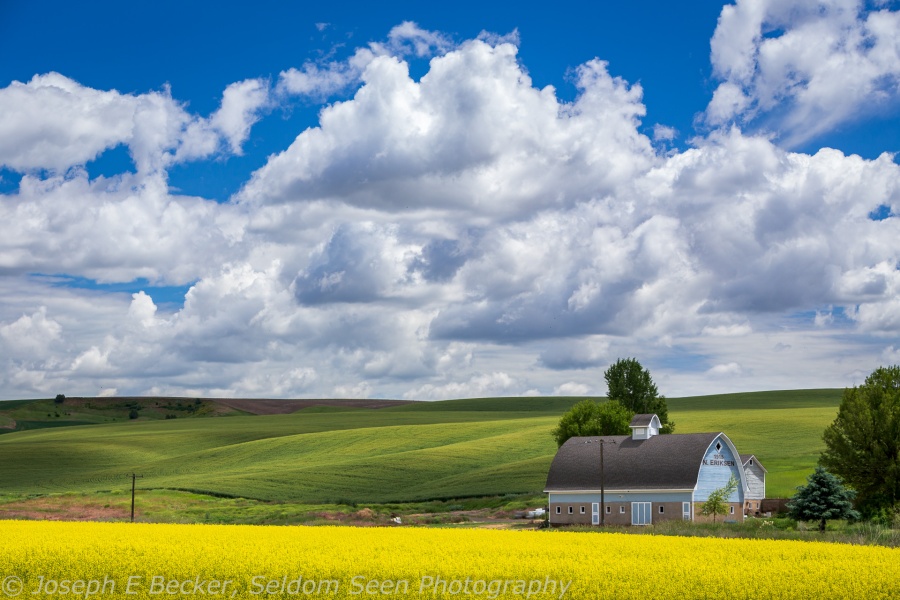 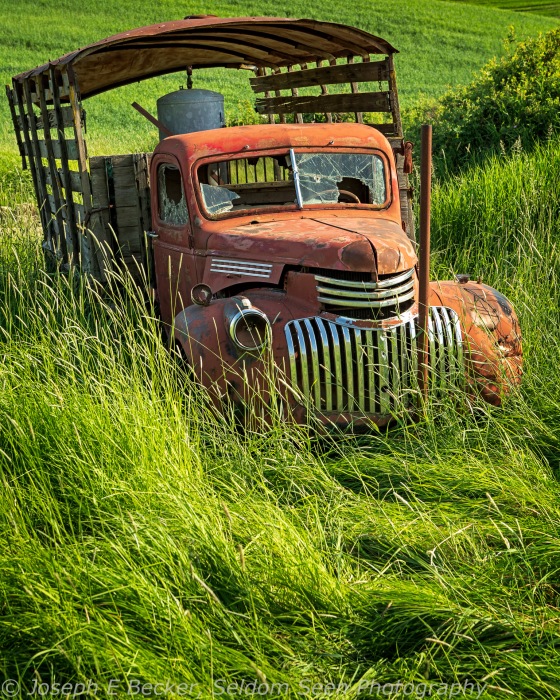 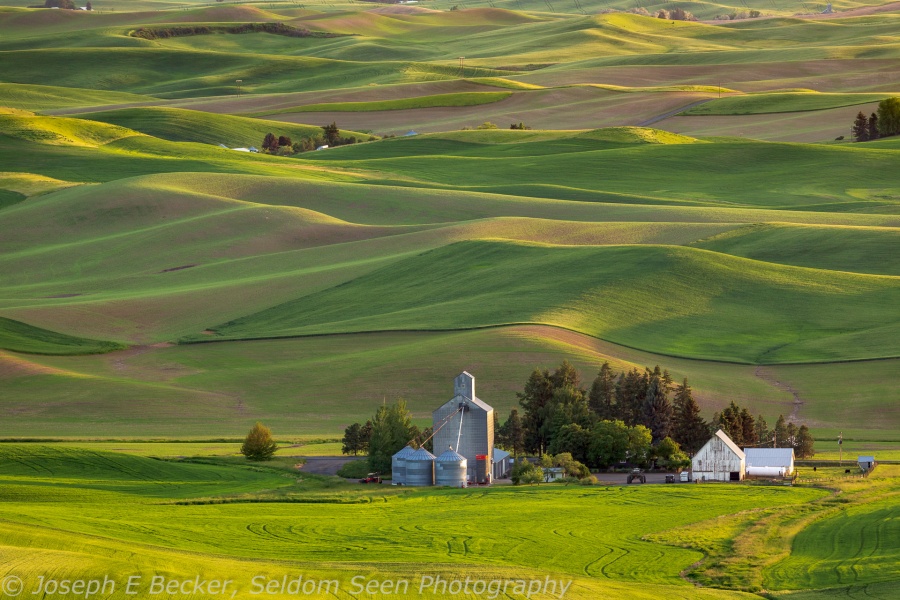 Without a doubt, Steptoe Butte is the most popular photography destination in the Palouse. And deservedly do. Rising more that 1,000 feet above the surrounding landscape, there is no better place to capture an iconic shot of the rolling hills of the Palouse. If you only have time to go one place in the Palouse, this is it.

However, if you would rather not share the view with dozens (or more) of other photographers, or if you are just looking for someplace else to go, there are several other places I know of that can give you similar shots to those captured at Steptoe Butte.

Most blog posts that recommend where to shoot in the Palouse, as well as Greg Vaughn’s excellent Photographing Washington, Kamiak Butte is mentioned as a good place to get similar views to Steptoe Butte. Though a bit lower in elevation than Steptoe Butte, its peak is more than 1,000 feet above the surrounding lands. There are several differences, however. Kamiak Butte is elongated, running northeast to southwest, so it doesn’t give the all directional views that Steptoe does. Also, most of its northern half is forested (Steptoe is treeless), so views to the north and northwest visible except in a few spots. Perhaps the largest difference is access. Kamiak Butte is a Whitman County park. The park access road is gated, and the gate locked from dusk to 7 a.m. If you want to drive up there for sunrise photos in the summer – forget it. Plus, unlike Steptoe, you need to hike to the viewpoints on Kamiak. The main loop trail up to the viewpoints is 3.5 miles, but you can get to the first viewpoints in about half a mile (with an elevation gain of about 320 feet).

Having to access the viewpoints by trail makes it difficult for sunset shots as well. Unless you are a trail runner, it might be difficult to shoot at sunset, hike back to your car, and get out the gate before it is locked for the night. (And yes, the sign specifically states you can get locked in.)

On the plus side, there will be fewer people there and the wildflower display at Kamiak is wonderful – in my experience, much better than at Steptoe. There is also no fee to visit Kamiak, while Steptoe Butte is a state park and requires a $10/day fee (or an annual state parks pass – the Discovery Pass).  Also, you can camp at Kamiak, while there is no camping at Steptoe.

I didn’t want to take my chances with the gate, so I my recent trips, I shot from Kamiak in the mid-afternoon and went elsewhere for sunset. The gate to Kamiak Butte County Park is in Kamiak Butte Park Road (image that!) at GPS coordinates 46.880353, -117.149009. 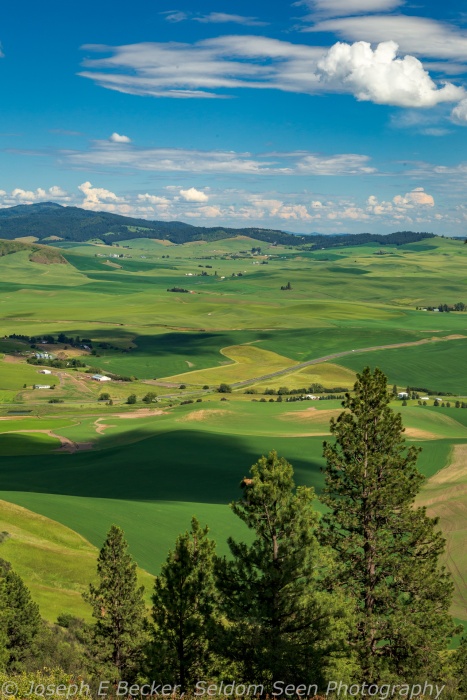 I found one source (Photograph America Newsletter #54) that suggested Marvin Wells Road as a good viewpoint. On this road, you can get to an elevation of about 2,975 feet, about 700 feet of the top of Kamiak Butte. The road approaches the butte from the west and skims along the bottom of the treeline (with the trees above the road on the butte). The view is not so vast as you get from the top, being only toward the west through north, nor will you be 1,000 feet above the surrounding landscape, but you do not need to worry about being locked out at sunrise or locked in after sunset.

Also, the elevation difference may not be as big a deal breaker as you might think. There is some debate about where is the best place to shoot on Steptoe, and many photographers prefer not going completely to the top, photographing instead from pullouts between some 400 to 600 feet lower than the summit. Marvin Wells Road puts you just underneath that same elevation range.

If you like your sunset between just you and your tripod, I can guarantee you, you won’t find any other photographers at the viewpoints along Marvin Wells Road (unless, of course, my blog post goes viral – ha ha!). Plus, there will be little to no traffic. The road leads to a single farm on the side of Kamiak Butte. I shot there several times during my recent visits and didn’t see any other photographers and only a single car passed me.

The best approach to the Marvin Wells viewpoints is from the west (the road does loop around to Fugate Road, just a mile east of the entrance to Kamiak Butte County Park; however, Marvin Wells Road off of Fugate is a very sketchy “summer” road [dirt roads open only in the summer] that I chose not to test with my SUV). Both South Palouse River Road (from the west) and Fugate Road (from the east) merge directly onto Marvin Wells Road below the butte. The viewpoint at GPS coordinates 46.862410, -117.182667 is to the west and northwest. By driving a little further on the road you can also see more to the northeast. 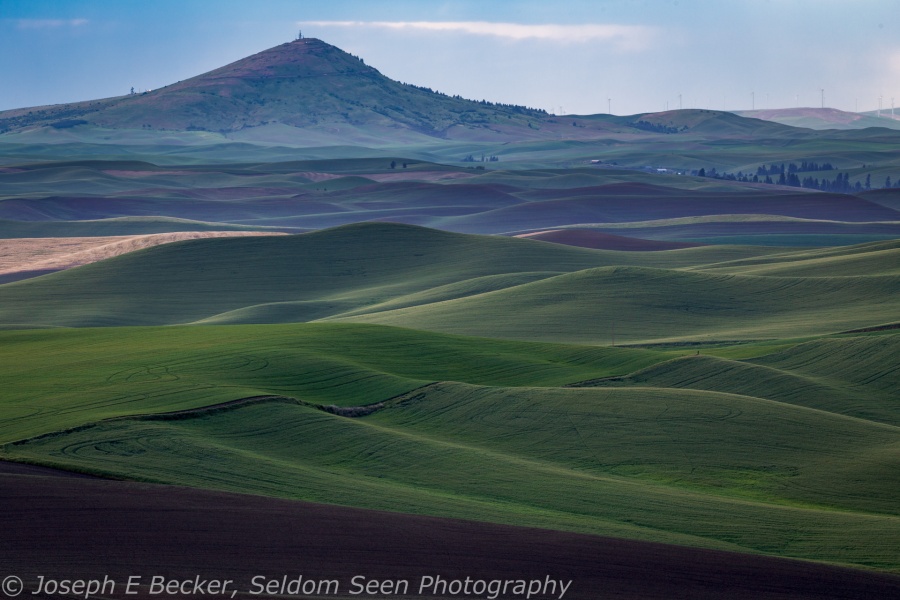 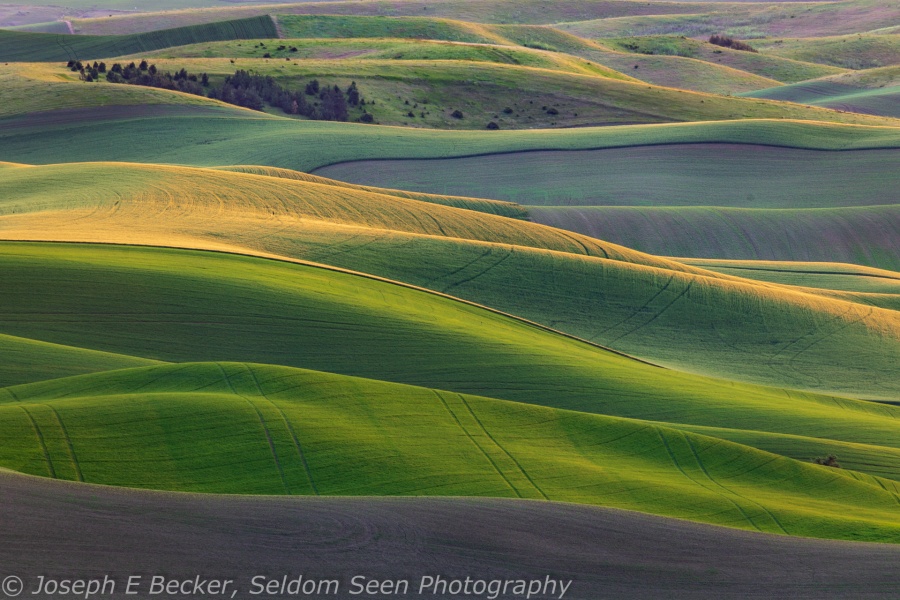 The viewpoint at Woody Grade Road is directly east of Steptoe Butte on the eastern edge of the Palouse region (in Idaho). It has an elevation of just over 3,030 feet, but the nearby surrounding lands are only about 500 feet lower. Still, you can get some good shots here. This spot, to my knowledge, is not mentioned any in other guides to the Palouse. I found it by searching Google maps.

There are two views here; one is a wide-open view to the west and north, and the other is a more restricted view to the south. The two viewpoints are about 500 feet apart.

You can access the Woody Grade viewpoints either from the south or from the west. Woody Grade Road west of the viewpoints is a summer road, which was in good shape when I drove it last month. South of the viewpoints, it is a good gravel road – so that is the preferred approach, especially if it has rained recently. Besides, it you approach from the south, you will go by a nice old school house (on Yellow Dog Road) that will surely tempt your camera lens.

The road from the school to the turn off to Woody Grade Road is Schneider Road. It continues east past Woody Grade Road, and it looks like there may be another viewpoint along it a bit more than a mile past the Woody Grade turn – though I didn’t go check it out on my recent visit. The viewpoints on Woody Grade Road are at about GPS coordinates 47.018650, -117.010974, and without a doubt, you will not be sharing this view with other photographers. The old school on Yellow Dog Road is at 46.99672, -117.033538. 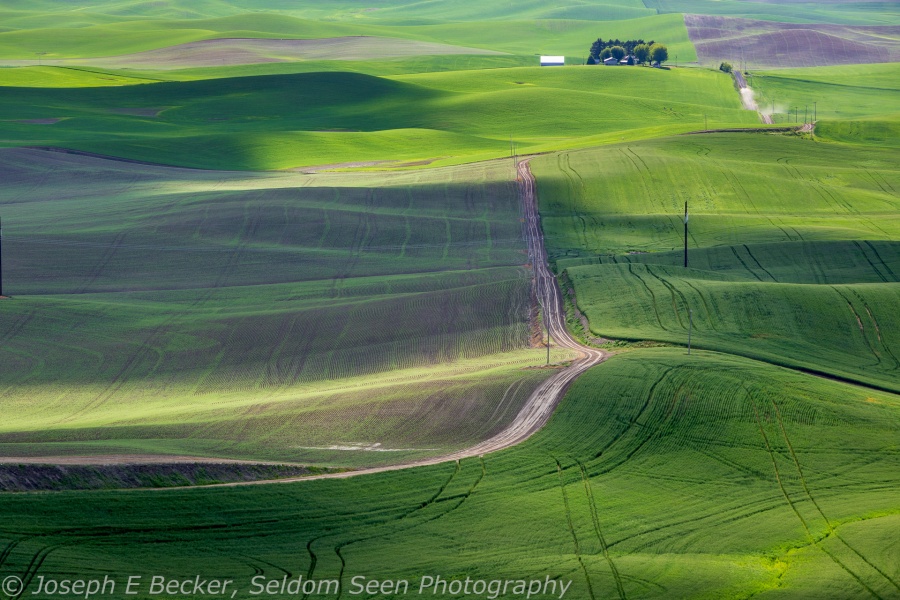 With a name like Skyline Drive, is it surprising this road has good views (including the featured image at the top of this post). I found this viewpoint several years ago by just driving around the Palouse scouting for good photographic subjects. At the time, it was the middle of the day, and I made a note to go back in better light – which I did on my recent trip. In doing an internet search, I found that I wasn’t the first to discover this spot – I found several blogs mentioning it. However, I venture to say it is not widely known. In the two times I’ve been to this section of road, I’ve only seen one other person. On my recent trip, just before sunset, a hunter came walking up the hill from one of the fields below. Seeing my camera, he remarked on the view and warned me about ticks (if you do wander around in the grasses of the Palouse, checking for ticks is very good advice).

The northern and western end of Skyline Drive Road starts just north of Farmington, Washington, a right-hand turn off the Tekoa Farmington Road if driving north. The road winds up a hillside and then traverses through Mary McCroskey State Park in Idaho. Skyline Drive Road is nearly 20 miles long, and I have only explored the northwestern end.  As the road continues from there into Idaho, it enters a forest. However, in examining it using Google Earth, it appears there may be several other spots where it leaves the forest and provides views of the Palouse. On a future trip, I hope to explore the full length of the road looking for additional viewpoints.

The northwestern end of the road near Farmington offers wonderful views of the Palouse to the south, west, and northwest, with Steptoe Butte forming a distant bump on the horizon. This portion of the road is at elevation 3,000 to 3,200 feet while the nearby surrounding lands are at about 2,600 feet.

The road itself is dirt and may be unpassable during or after wet weather. I found the road to be generally in good shape. The Idaho state parks website suggests the road may be “too rough” for a family car, but I don’t believe this northwestern section is. Though there are many spots along the road to take great photos, general GPS coordinates for this northwestern section of road are 47.125139, -117.042153.

There are many other viewpoints with more limited views in the Palouse region. Typically these occur where a road crests one of the rolling hills that is somewhat higher than its surrounding neighbors. I’ve found several that are worth mentioning, and I will do so in when my guide to the Palouse comes out next year. For now, I’ll just show you two examples from one such spot, the crest of Clear Creek Road (46.897361, -117.185005).

Meanwhile, I’m on the hunt for more viewpoints in the Palouse. If you happen to have a favorite one, particularly if I’ve missed it, please leave a comment or drop me an email. 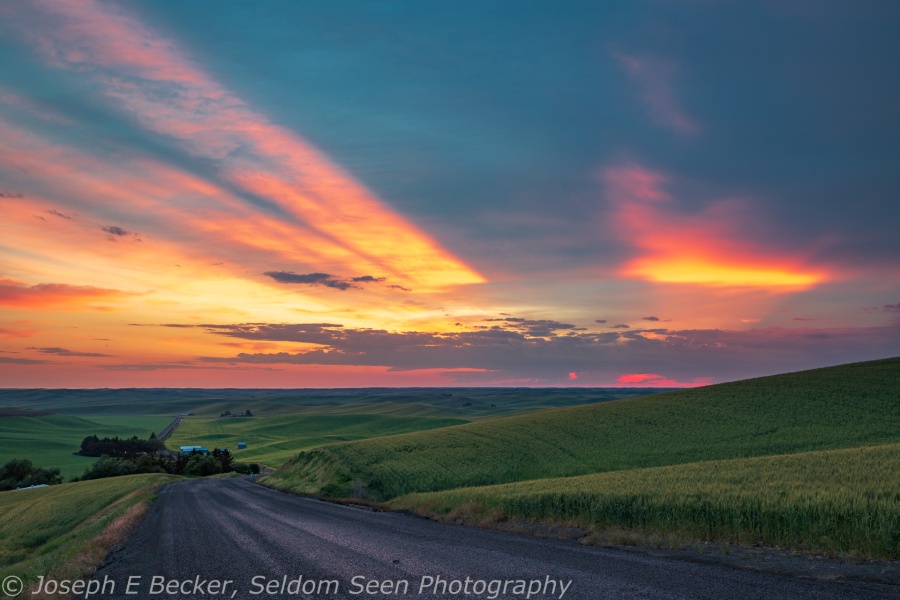