Norway has 18 national scenic highway routes; and Tanya and I drove several of these as we traveled around the western Norway. I previously posted images from one such route, Hardangervidda. On one of our longer travel days during our trip, I planned a route along three national scenic highways. The first of the day was Sognefjellet. The National Scenic Route Sognefjellet runs 108 kilometers, from Gaupne on Lustrafjorden (a branch of the Sognefjord, Norway’s longest and deepest fjord) up and over the mountains, past Galdhøpiggen (the tallest mountain in northern Europe), and down to the town of Lom.

This is truly a magnificent and scenic road. And we luckily were able to drive it on a mostly sunny morning. We drove from west to east, starting at sea level along the fjord and climbing through a series of hairpin curves up into the mountains above the treeline. The fjord was like a mirror and the mountains were covered with fresh snow – totally incredible. There were almost no cars on the road, which was a good thing considering how slick the road was in the shady sections while coming down off the pass (driving as slow as possible to keep on the road in our rental car with non-winter tires). Our journey over Sognefjellet ended in Lom, with its famous stave church. By the time we reached Lom, the fine sunny morning had given way to a cloudy mid-day.

After visiting the church, we took a different highway and drove back over the mountains to Geiranger, planning to take a detour along our second national scenic road of the day. However, the road was closed due to snow. So we drove straight to Geiranger, traveling on the third national scenic route. But by now, the fine sunny morning had turned to a snowy afternoon with near whiteout conditions, so there wasn’t much scenery to see. As it turned out, that road was closed due to snow not more than an hour after we drove it.

So my day  photographing along three scenic roads was disrupted by weather. But even so, that first road, Sognefjellet, made the day one I won’t easily forget.

Lustrafjorden at the town of Skjolden

View as we climbed in the mountains above the treeline

Another shot from the same spot as the photo above

High in the mountains near the top of the pass

At the Mefjellet rest area, at the top of the pass, 1,434 meters above sea level, has this unusual sculpture by Knut Wold

A mountain lake on the far side of the pass.

One view from the Vegaskjelet viewpoint partway down the pass 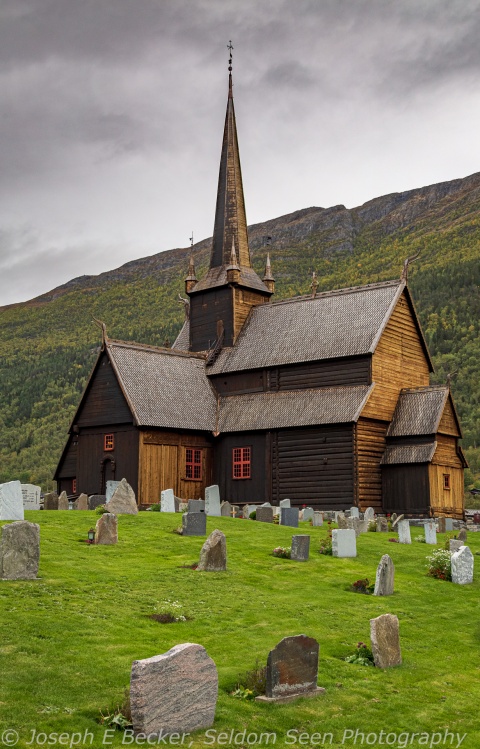 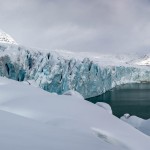 Tanya and I have left Norway and are now spending several days in London before heading home. However, I still want to put out a few more posts about Norway. One of the highlights of the trip was a visit to Austdalbreen, a tongue of the mighty Jostedalsbreen glacier. Jostedalbreen is the largest glacier in mainland Europe. There are several places to visit the glacier, but one of the best is at Austdalbreen.

Most the glacial hiking tour companies had closed for the season, but we found Icetroll was still open, so we booked a glacial hike on Austdalbreen. To reach Autdalbreen, you need to cross a glacial lake in front of the glacier, Icetroll offers trips crossing the lake by kayak and by Zodiac. We choose the zodiac approach. This worked very well as the weather was good in the morning, but deteriorated later in the day. In fact, the weather in morning and early to mid-afteroon was about perfect. The rainstorms from the day before brought fresh snow to the mountains and glacier, and partly sunny skies provided beautiful light on the glacier as we approached on the lake and later on our hike. However, by the end of our hike, about the time those touring by kayak arrived, the weather turned and it started snowing again.

On the trip across the lake, as we approached the glacier, the guide took us by several small icebergs, and stopped so that each of us could stand on an iceberg (there where four others in our group besides Tanya and I). Then we tied up to shore and hike a short distance to some gear boxes, where we roped up and put on crampons. From there, our guide took us up onto the glacier. We hiked on the glacier for about an hour and a half, stopping for photos and for some hot chocolate. The view was magnificent. As we left the glacier, we stopped at a spot where we could get down underneath the ice (see my Instagram post of glacial ice). Then it was a zodiac trip back across the lake in falling snow to return to the van and a trip down the mountain.

The featured image, above, is a 3-shot panorama I took while up on the glacier. Below are several other images from the trip.

Small iceberg in the lake in front of the glacier 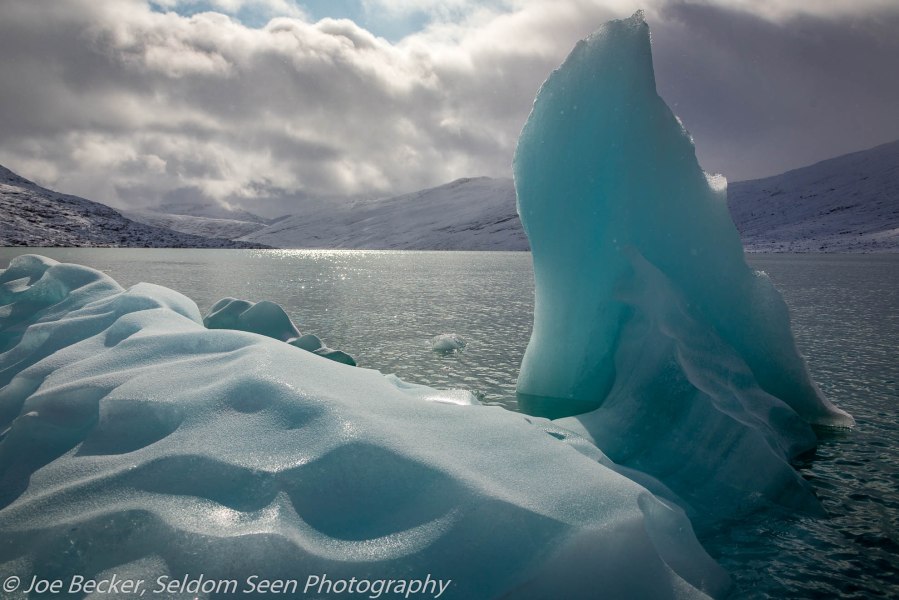 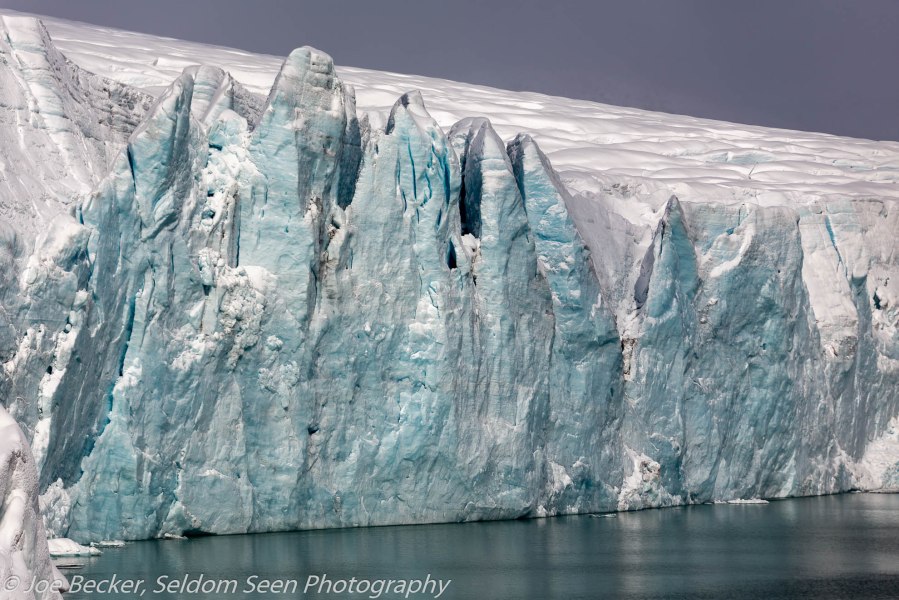 The face of Austdalbreen at the lake 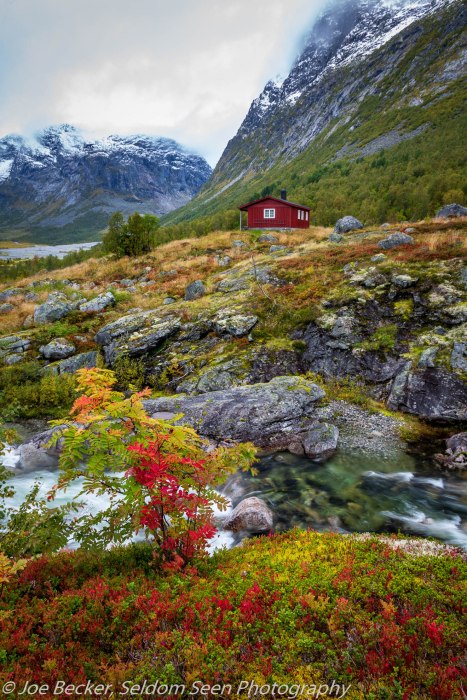 Scene I captured in the valley below the glacier after our hike. 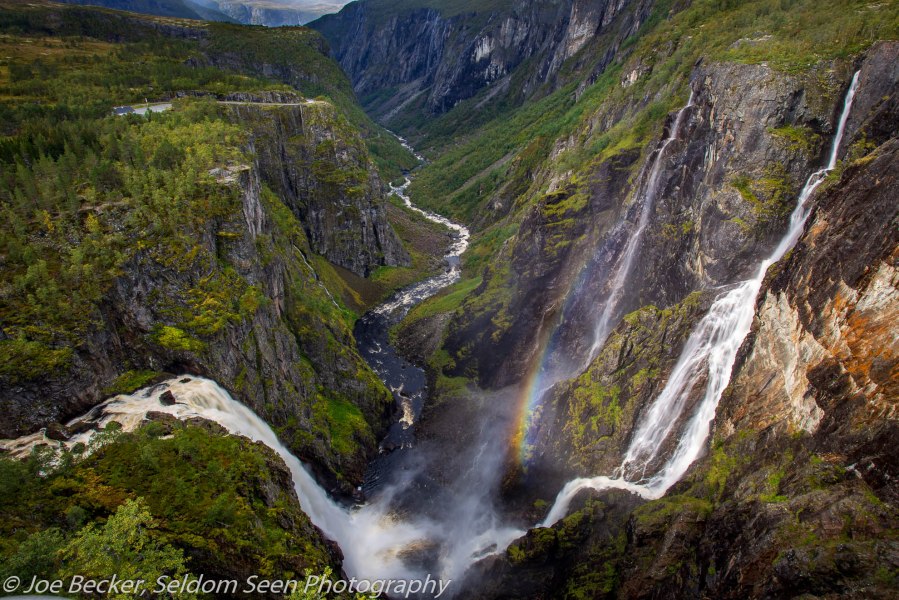 Our trip has been challenged by wild weather, including the remnants of Tropical Storm Gabriella and Hurricane Dorian. The day we drove up to the Hardangervidda Plateau was no exception. We spent the night in Eidfjord (at sea level) and awoke to overcast skies. At least the constant rain from the night before was over. It rained on and off throughout the morning as we toured a couple local sights before heading up toward the Hardangervidda Plateau. When we reached Voringsfossen (about 700 meters above sea level), the weather started to break.

Voringfossen is an amazing set of waterfalls; reportedly the best known waterfall in Norway. The falls are about halfway up to the mountain plateau. Here water tumbles over 180 meters from several sides down into a narrow canyon. The view is amazing. The photo above does not do the scdne justice (even with capturing a bit of rainbow).

Leaving Voringfossen the road continues to up to the Hardangervidda (at an average elevation of 1,100 meters above sea level). This broad mountain plateau is above the tree line and is a land of high tundra hills and studded with lakes of all sizes. It is the highest plateau in Europe and home to a large wild reindeer herd (which we did not see). The drive across the plateau and back was spectacular, with the landscape changing with the changing weather conditions of overcast, light rain, snow storms, and sun breaks. I could have spent the whole day there with my camera, but the near freezing temperature and strong wind (plus a need to get to our hotel in Flam, several hours away) had us only staying on the plateau for a few hours. Here are few shots from Hardangervidda; enjoy! 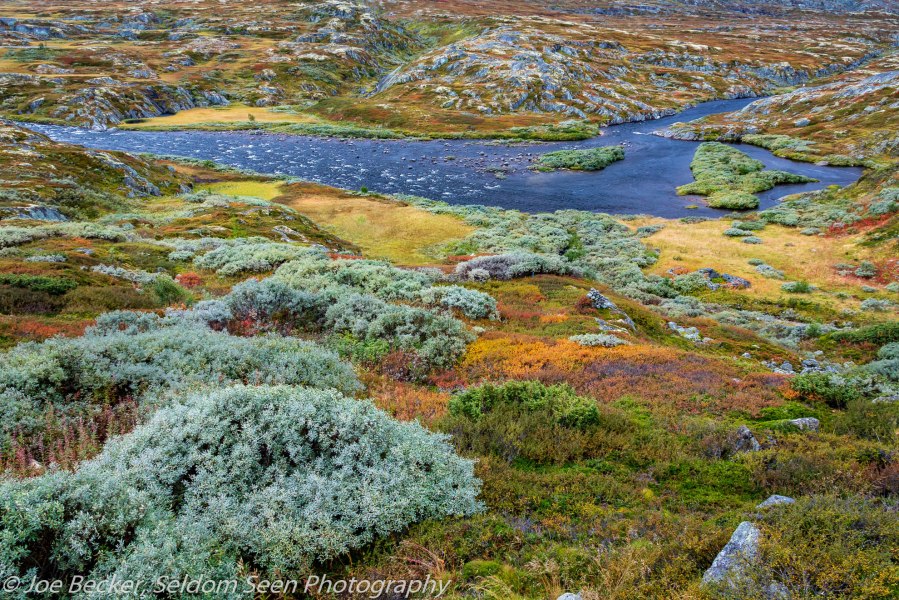 Small lake on the Hardangervidda 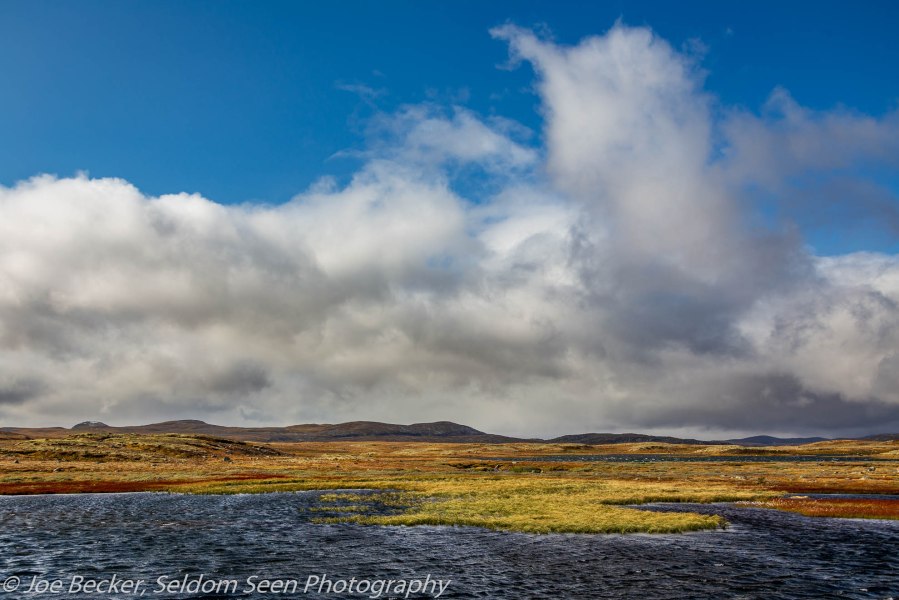 Another lake on the Hardangervidda 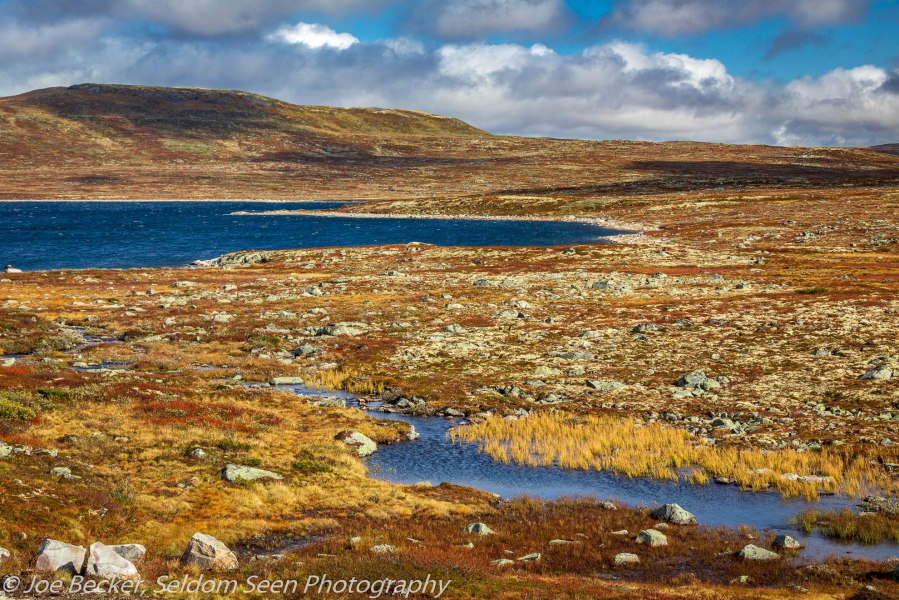 Typical scene on the Hardangervidda

Old stone bridge on the Hardangervidda 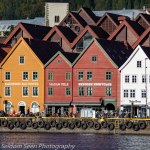 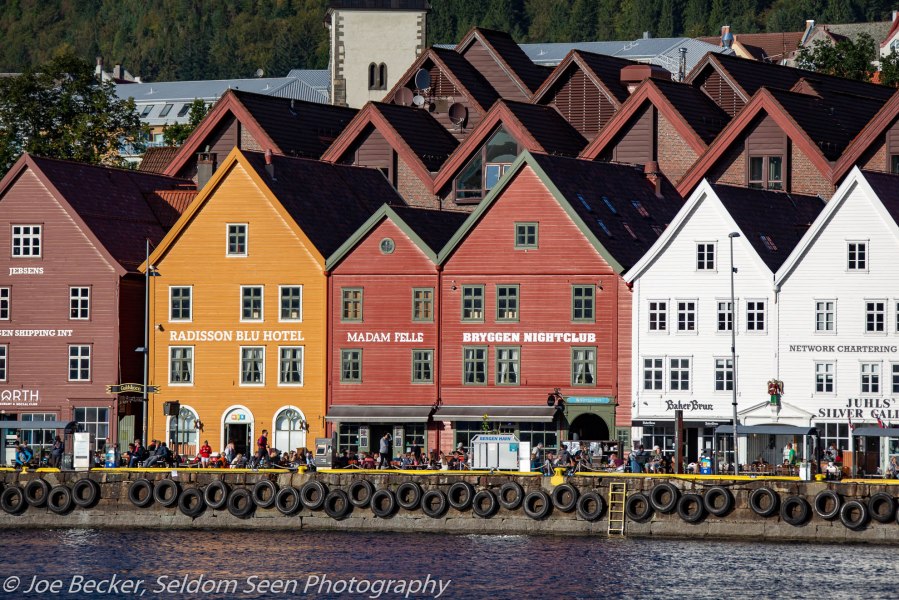 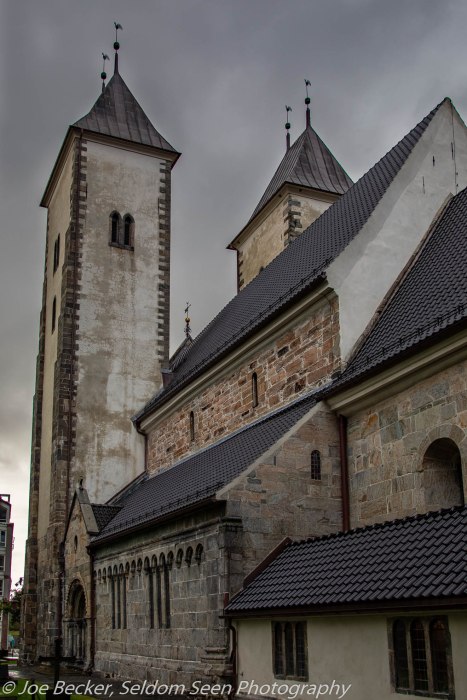