Tanya and I returned from our trip to the Tetons and Yellowstone last night. Above is one of the last shots I captured while in Yellowstone. This grizzly brought down this bull elk on September 18th by chasing it into the Yellowstone River, mauling and drowning it, and bringing it back to shore to eat. The drama was captured on video by a lucky photographer, which you can see here on YouTube. My photo was taken several days later, on the morning of the 21st. According to the ranger, the bear will stay and feed on the elk for days, probably until the local wolf pack arrives and chase him off. The bear has buried the portion of the elk it is eating to hide the smell.

The bear is camped with his kill on the far side of the Yellowstone River from the road. The park service made a no stopping zone directly across the river from the bear, but is allowing people to view the bear from slightly up and down stream. I drove by the spot several times before stopping to take photos. As you might imagine, the place was packed with photographers and and other visitors (many without masks and not keeping social distance). I went on Monday morning (our last morning in the park), hoping for a smaller crowd. Indeed, the crowd was a bit smaller, but perhaps it was because it was foggy and, at least when I arrived, you couldn’t see the far side of the river. I stayed for about an hour and a half, and the fog partially lifted.

In this shot, to me, the bear looks quite satisfied. Prior to this shot, as the fog started clearing, I could see the bear busily piling more dirt on the back end of the elk, presumably having finished a morning meal earlier when the fog was took thick to see.

This was shot with my Tamron 150-600 mm at 600 mm and then cropped in some as well. The raw image is hazy due to the fog, and it took a healthy dose of the dehaze filter in Lightroom to bring out detail.

I’m posting from Grand Teton National Park. Wildfire smoke has hampered my photography, but at least Tanya and I can see the mountains (unlike a couple days ago when we first arrived). And it is much better here than back at home. Smoke was less of an issue last week when we camped at Little Redfish Lake near Stanley, Idaho. Above is a shot of the sunrise over Redfish Lake one morning last week. I’ll be posting more from our trip when I get a chance. Until then, enjoy this quick shot. 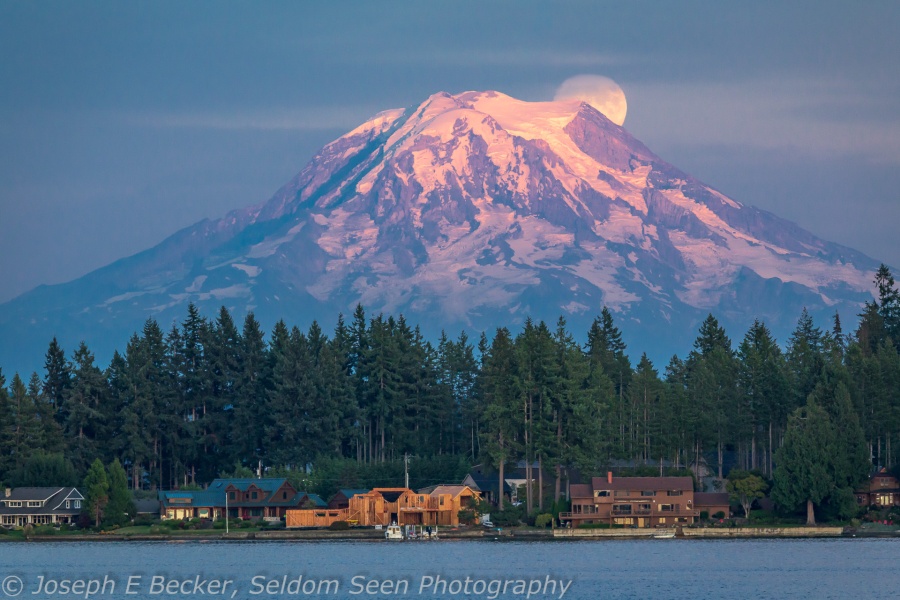 It has been a while since I posted. I wish I could tell you that it is because I’ve been so busy going out doing photography, but that is not the case. House projects seem to be taking up my whole summer. But I did get out last Tuesday night with some friends to photograph the full moon rising over Mount Rainier. After seeing on the Photographer’s Ephemeris that the full moon would rise behind Rainier as seen from the Fox Island Bridge, I’d planned this shot for a month. As the day progressed, I occasionally checked the weather, and it looked good. That is, until close to sunset, when high clouds started coming in. And unfortunately, just as the sun was setting and the moon rising, there were high clouds immediately above the mountain.  The moon was obscured almost as soon as it rose.

The photo above is about as good as it got, and this image took some Photoshop work to bring out the top of the moon. Not bad, but not what I had imagined I would get. No matter how long you plan, Mother Nature’s plans sometimes trumps yours.

I recently returned from spending a few more days in the Palouse. June is prime season for photography in the Palouse, with green hills everywhere. My goal was to get a few shots I’ve missed in my trips last year. In that regard, I did not go to Steptoe Butte, but rather hit the few spots on my list that I missed last year and did some exploring on roads I had not previously driven.

For now, I wanted to offer up one quick shot from the trip. I shot this last Sunday evening just after sunset with the soon to be full moon rising over the hills. I’m not sure I like the sunset lit clouds on the edge of the image, but I can’t really complain being able to witness and capture such a scene. I’ll post some more from the trip in the next week or so.

Last Sunday I returned from another trip to the Palouse. My photographer buddy Don Thompson accompanied me for four days, while Tanya kept me company for two more days. I have to admit I’m a bit tired of getting up for 4:55 am sunrises and staying up to 10:00 pm to catch the blue hour after sunset, but it was worth it to capture a few great shots. Above is a quick shot of one of my favorites from the trip. Don and I shot at this spot early in the trip, but I went back when there was better light (sorry Don) and am pleased I did. I’ll post a few more from the trip soon. Want to know where to take this shot? I’ll tell you in my upcoming Snapp Guides guide to the Palouse due out in 2019 (okay, if you want to know before then, just let me know).