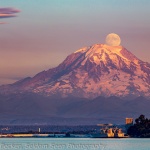 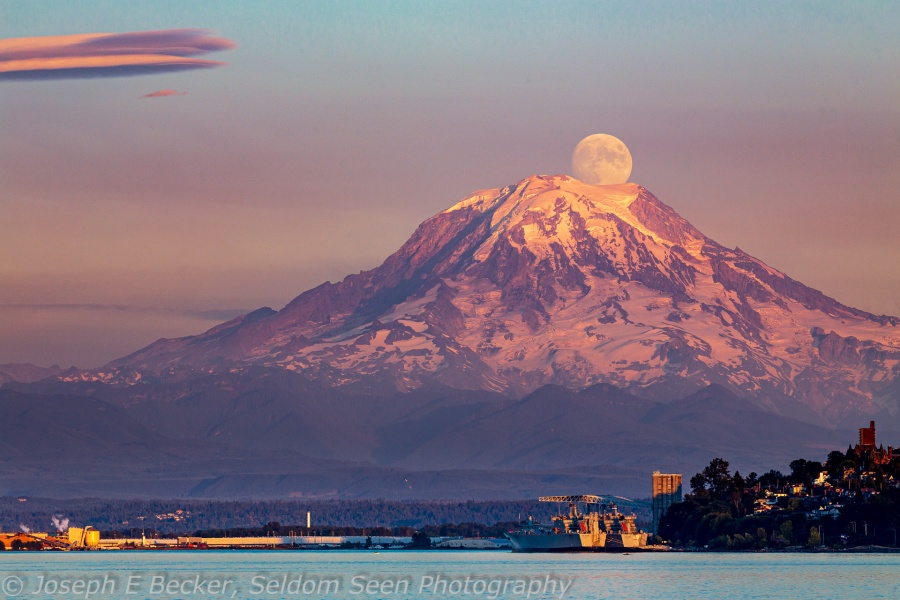 After trying for about a year, I finally captured the shot of the full moon (or almost full moon) rising over Mount Rainier. I’ve discussed my various attempts at capturing this shot in several previous posts, including this one from August 2019 and this one from earlier this year. Using the Photographers Ephemeris, I calculated what days the nearly full moon will rise behind Mount Rainier from spots near to Tacoma. This happens every year in June, July, and August.

I say almost full moon because I wanted to capture the moon just before sunset, and on day of the actual full moon, it ususally rises after sunset. The shots here were taken two days before the official full moon. My other attempts, described below, were the day before the full moon.

Last August, I went to the Fox Island Bridge along with several friends to capture the rising moon. We did see the moon rise behind Rainier, but the clouds partially obscured the moon and the light on the mountain itself was not optimal. I went again last June and had similar results. In July, I again met two friends, this time at Dune Park in Tacoma. However, the mountain and the rising moon were not visible due to clouds (though I did get some other worthwhile shots).

Finally, last month I had success, as you can see from the shot above and those below. Once again I journeyed to Dune Park, and all the necessary elements for a successful shot fell into place. I had the added bonus of seeing a dolphin frolicking off the park’s shores – the first time I’ve ever seen a dolphin there. Were the shots worth waiting and planning over an entire year? You be the judge. 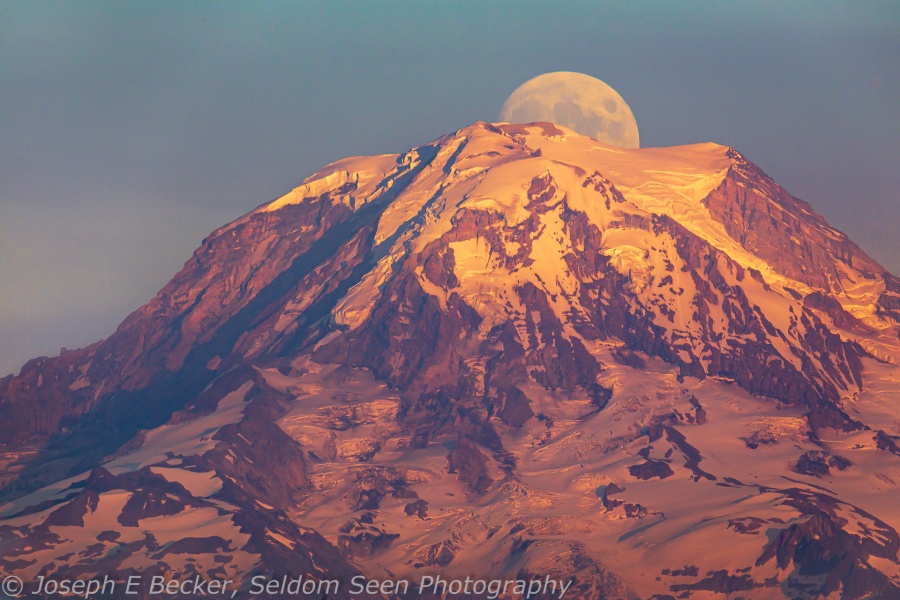 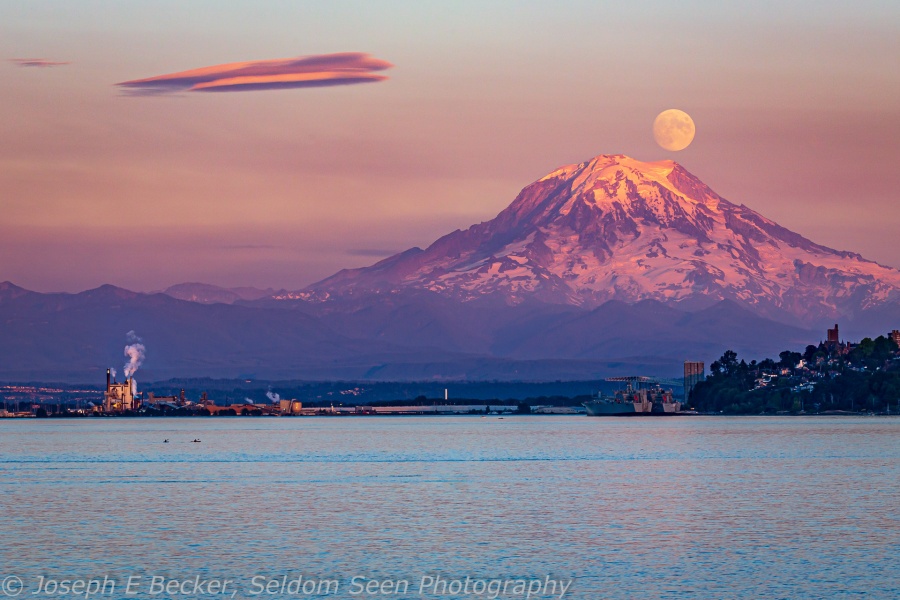 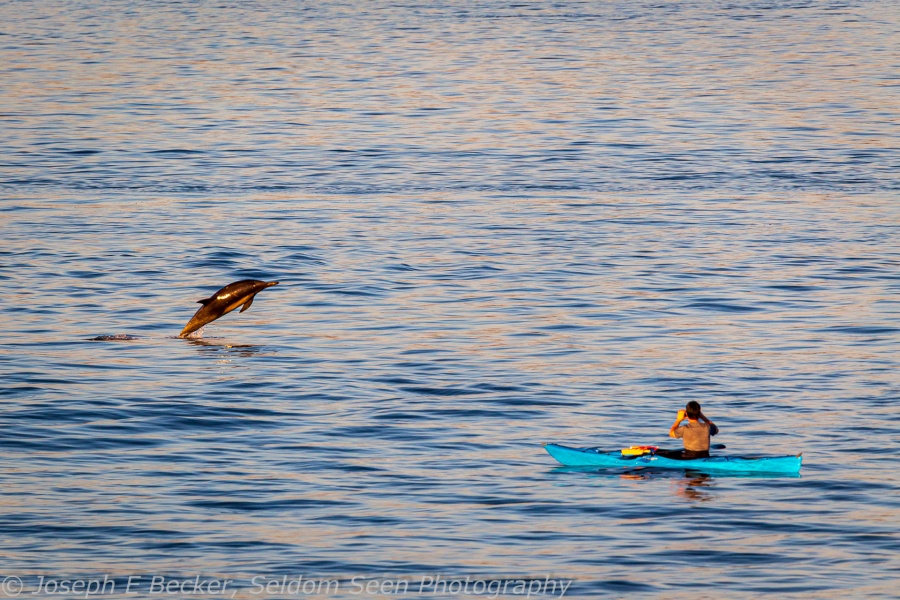 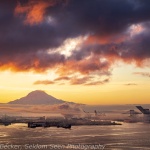 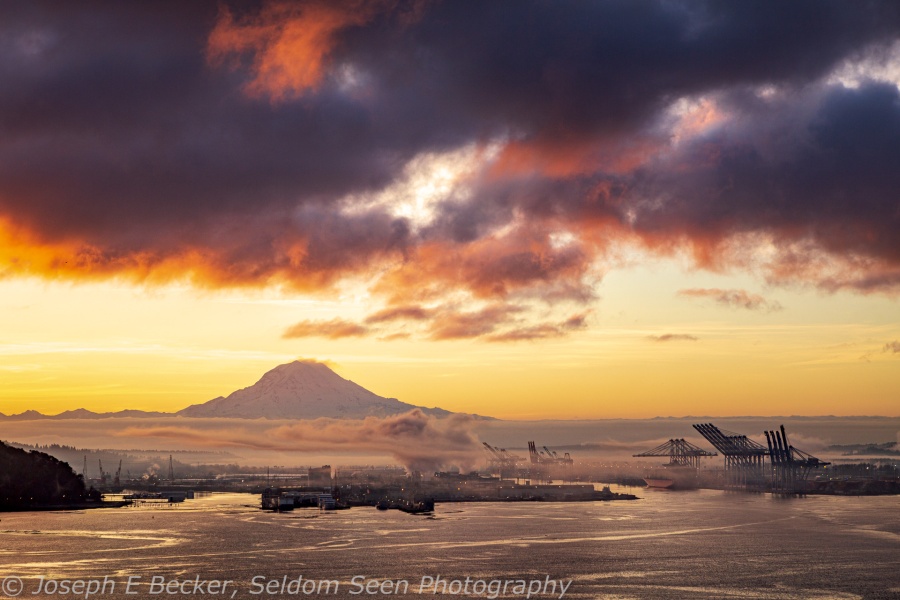 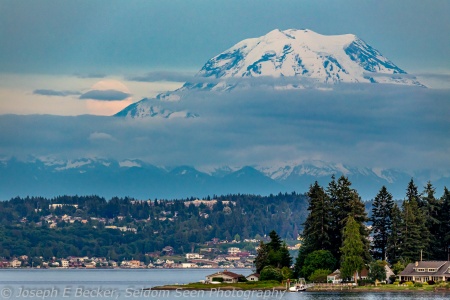 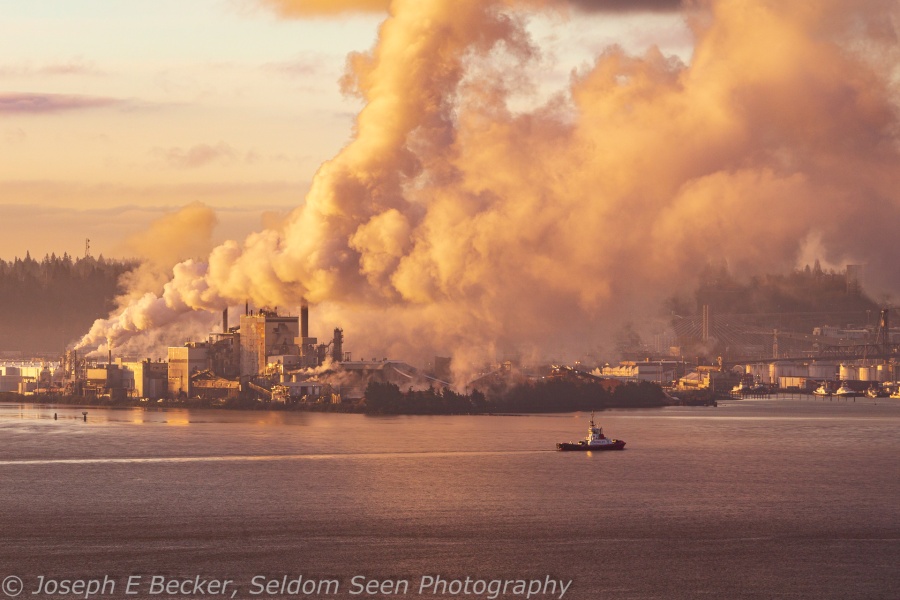 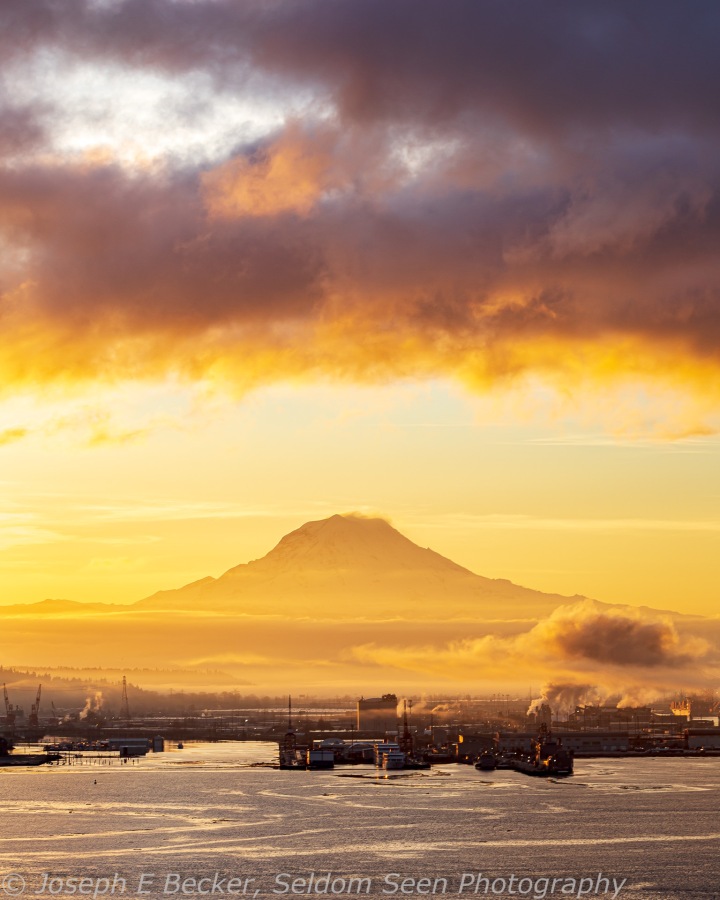 Photography in the Land of Covid-19 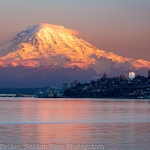 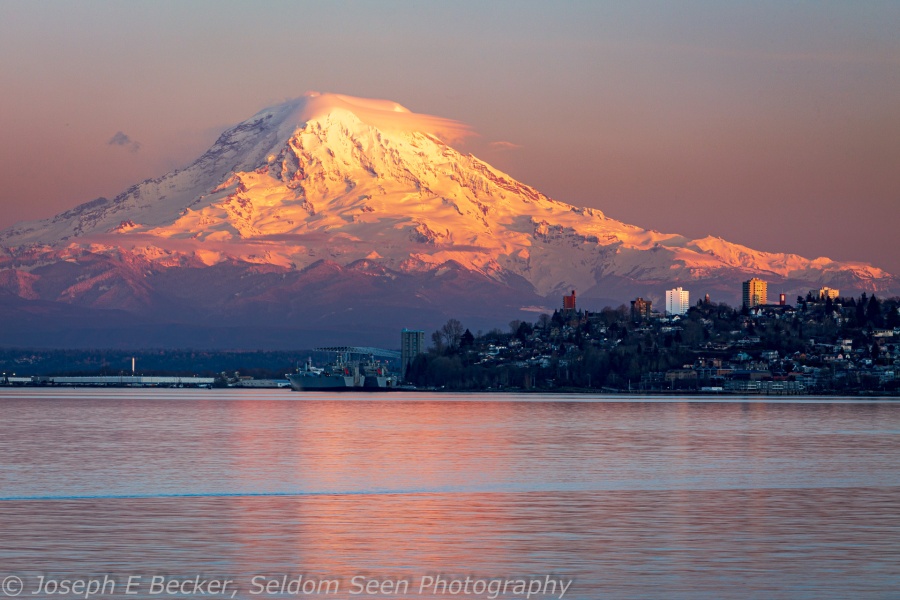 As you may know, the Seattle area is a hot spot for Covid-19 in the United States, though it is spreading fast elsewhere as well. Two days ago, our State’s Governor announced a moratorium on gatherings of more than 250 people the three counties forming the Seattle metropolitan area. Major League Baseball is postponing the start of the season – it’s just as well, the Mariners had already announced they were moving the home opener (which I attend every year) out of town. I got a call from the theater about a cancelled show Tanya and I have tickets to later this month.

On Tuesday, Tanya and I went up to Seattle to visit our daughter, Janelle, and her partner, Matt. We ate at a restaurant we have been to several times before. It has always been packed, and reservations are usually necessary, even on Tuesday nights. We walked in at 7 pm and besides two people at  the bar, we were the only customers in the place. That’s one of the “nice” things about this virus outbreak, it’s easy to find a table at a restaurant, at least until the restaurant’s close due to lack of business. Another bonus was the lack of traffic on the freeway.

In addition to the moratorium on crowds, the health department recommends keeping a separation of at least 4 to 6 feet from other people. Public life around here is pretty much at a standstill.

What is one to do? How about going out and shooting some photography? Luckily, photography is one activity that is easy to do while keeping that separation from other people. Besides, if you like to shoot the type of photography I do, crowds are a pain and something to avoid. So if Covid-19 has got you down, take your camera out and do some photography!

That’s exactly what I did a few days ago when I headed over to Dune Park.The official name for the park is Dune Peninsula at Point Defiance Park. I guess we could call it DPPDP, but it is easier to call it Dune Park.

It is the newest park in Tacoma, opening last July. As its official name suggests, the park is located on a small peninsula. The peninsula is not a natural feature, but instead consists of a pile of slag from the old Asarco smelter that formerly existed near the park location. Apparently, they dumped the slag in Puget Sound to create a boat basin for the Tacoma Yacht Club, which also occupies a portion of the peninsula – the park on the outside of the peninsula facing Puget Sound and the yacht club on the inside, facing the boat basin. The park is a remediated portion of the Asarco superfund site. By the way, the park is named after Frank Herbert’s novel Dune; pretty cool in my opinion. Herbert was a Tacoma native. The shoreline trail through the park is named the Frank Herbert Trail.

I’ve made several trips to Dune Park over the past several months to shoot the view of Mount Rainer.The view of Rainier from the park is magnificent, perhaps the best in the City of Tacoma. With a telephoto lens, the Mountain towers over the city and Commencement Bay. But it also looks great with a wider view incorporating the curving shoreline. The view is good for sunset year round and for sunrise portions of the year – at least when the Mountain is out. The blue hour can also provide excellent images.

My trip to the park Monday evening was my third trip trying to capture a decent sunset. The alpenglow on the mountain has been good two of the three times I’ve gone, but I’ve yet to get some good sunset clouds. Monday there was a little cloud cap on the top of the mountain, but it was so small it is almost not visible in the images. Still better than nothing and no need to get within 6 feet of anyone else! The featured shot above is from Monday, as is the wider-angle shot below. The final shot is from December, in the blue hour after sunset.

The park is less than 2 miles from my house, so I’ll keep trying for the great sunset. In the meantime, enjoy these shots, wash your hands frequently, and stay healthy! 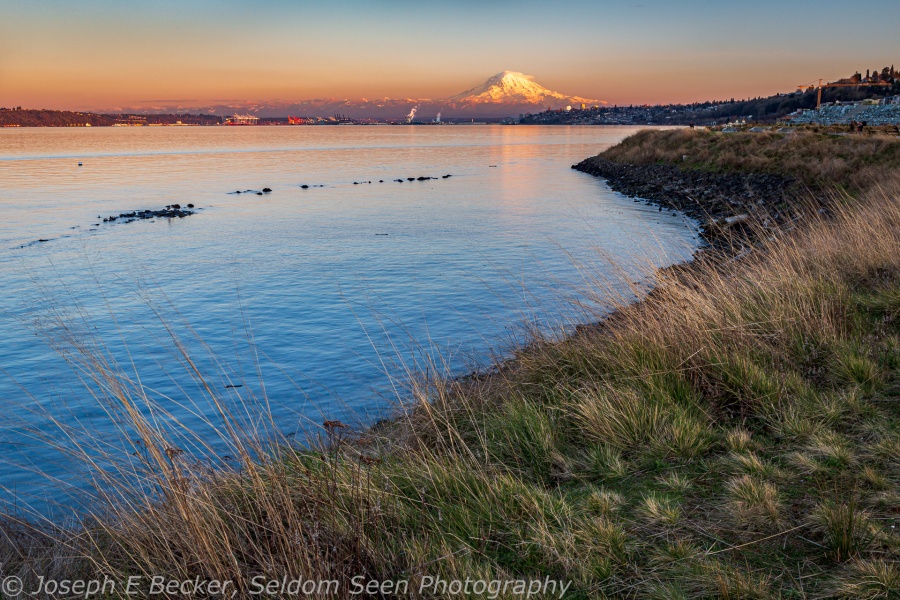 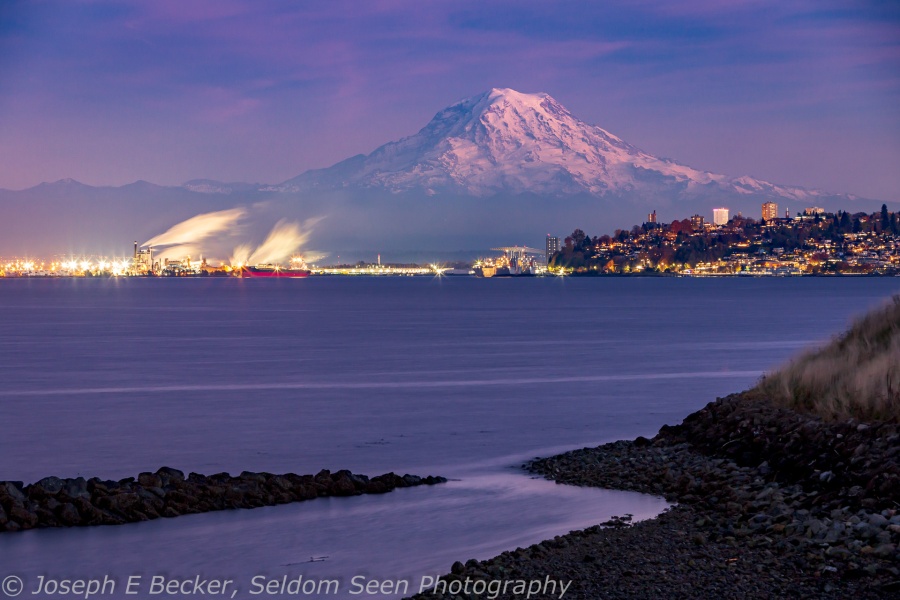 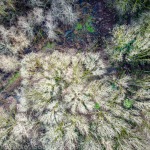 It’s been way too long since I posted. The winter has been busy with editing my 2019 photos as well as lots of other chores. But with some nice weather this President’s Day holiday, I was able to get out for the first flight of my new drone (other than just playing around in the yard). The drone is a Mavic Mini, which Tanya gave me for Christmas. It has a 12 megapixel camera, that only shoots jpg, but it seems to do a decent job based on the photos I took today.

I didn’t head very far for this flight. I went to Mason Gulch, about 5 blocks or so from my house. Mason Gulch is a steep ravine cut into the hillside populated with lots of deciduous trees, which are still barren of leaves. It’s a little bit of wilderness here in Tacoma.

So here are a few sample shots. What do you think? 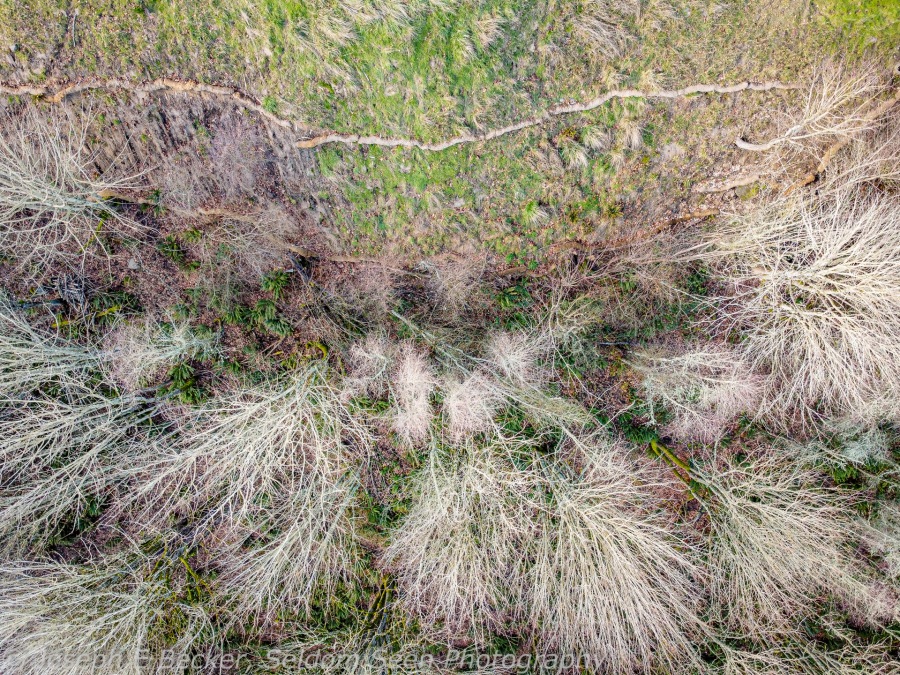 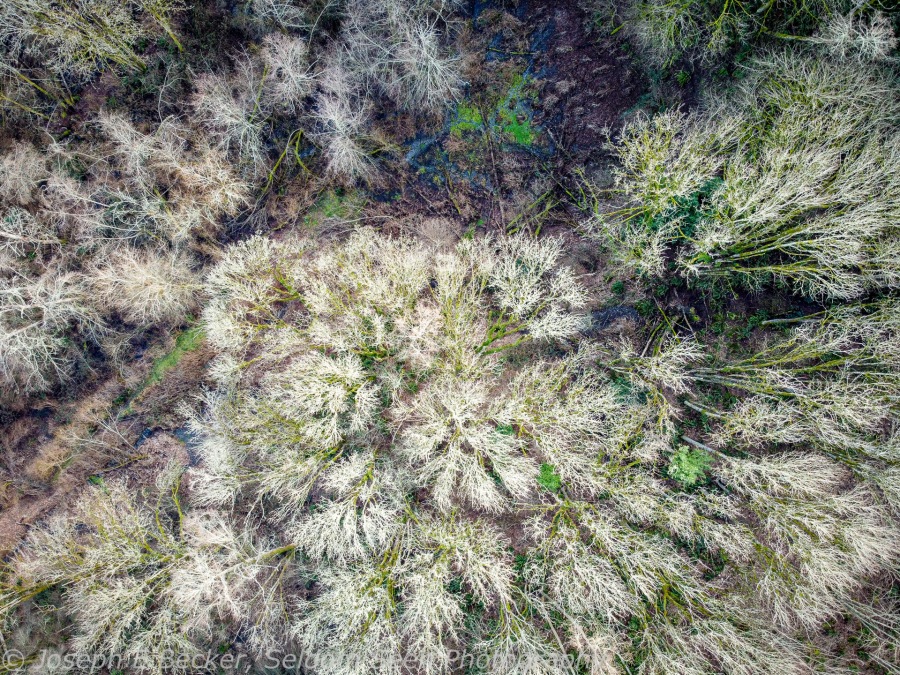 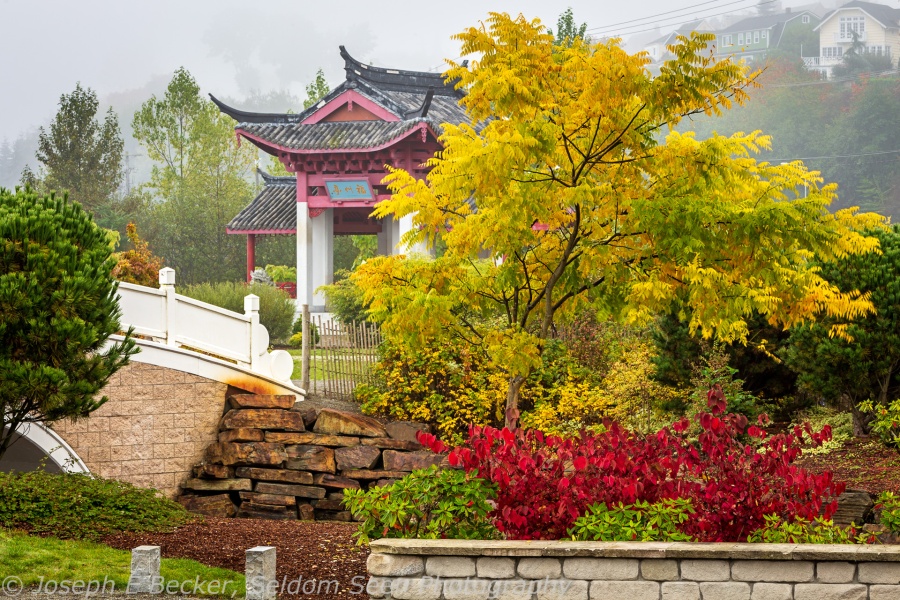 Once again I’m in the Tacoma Open Studio Tour. The tour will be this Saturday and Sunday, October 12 and 13, from 11 a.m. to 5 p.m. both days. The tour invites you inside the working studios of 96 local artists to learn about the artistic process, ask questions, and purchase one-of-a-kind creations. All studios will feature demonstrations or will have hands-on activities for visitors. I will be offering visitors a chance to make a photographic masterpiece using scanography – photography with a flat-bed scanner. I will also have more than 50 prints on display, including the five featured on the this post, many new images from this year, and some of my “classic” images.

Please come by if you have the chance! You can get more information about the tour at the studio tour website. Or you can check out this map with all the studio locations to plan your tour (I’m studio #51). 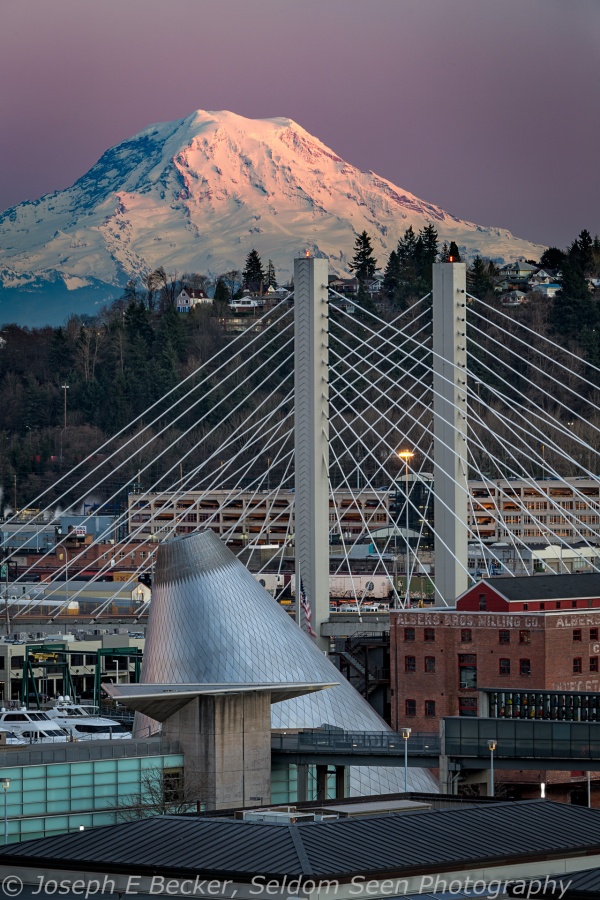 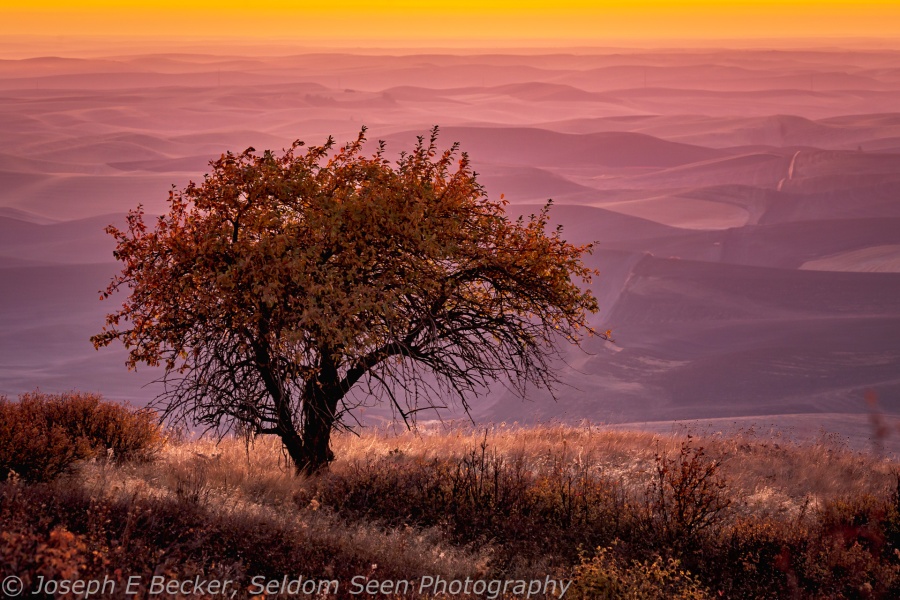 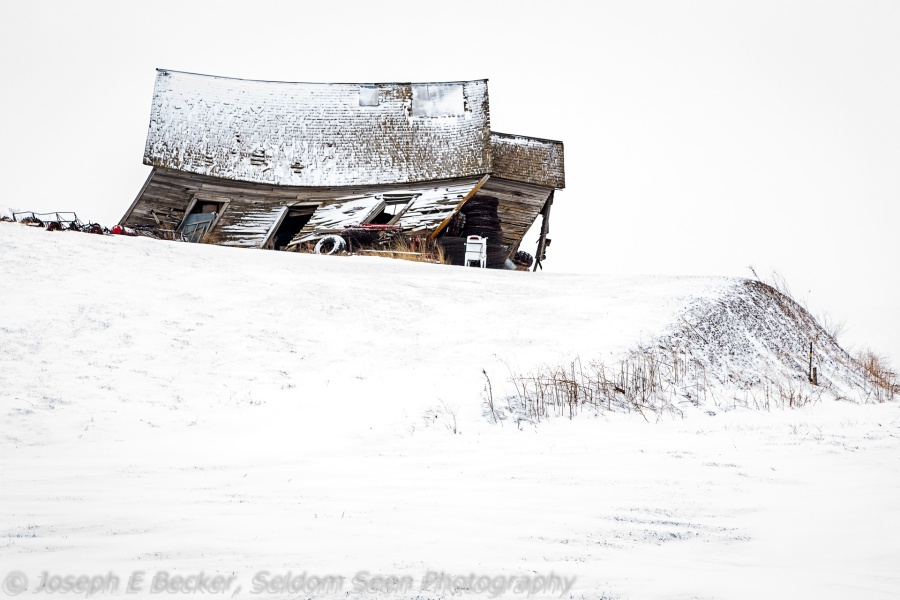 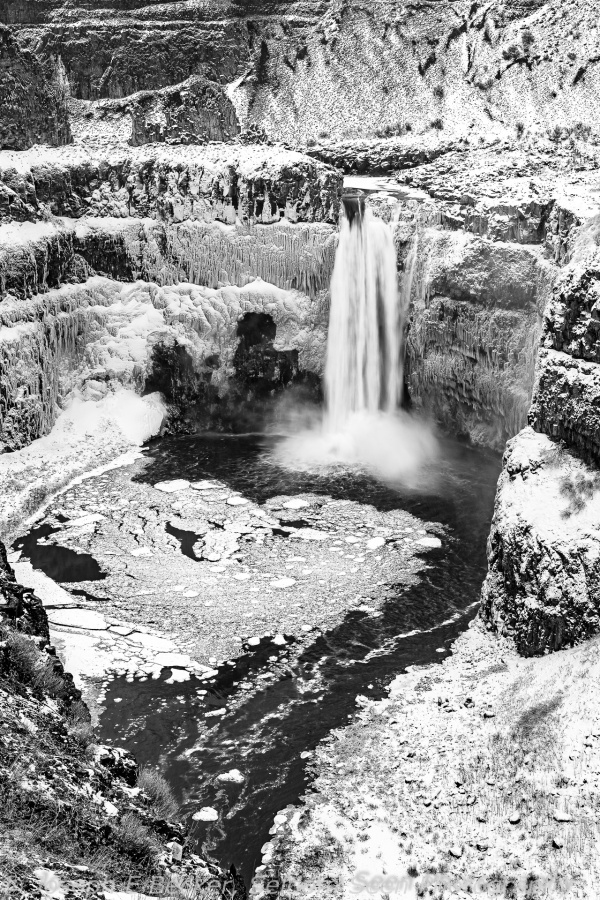