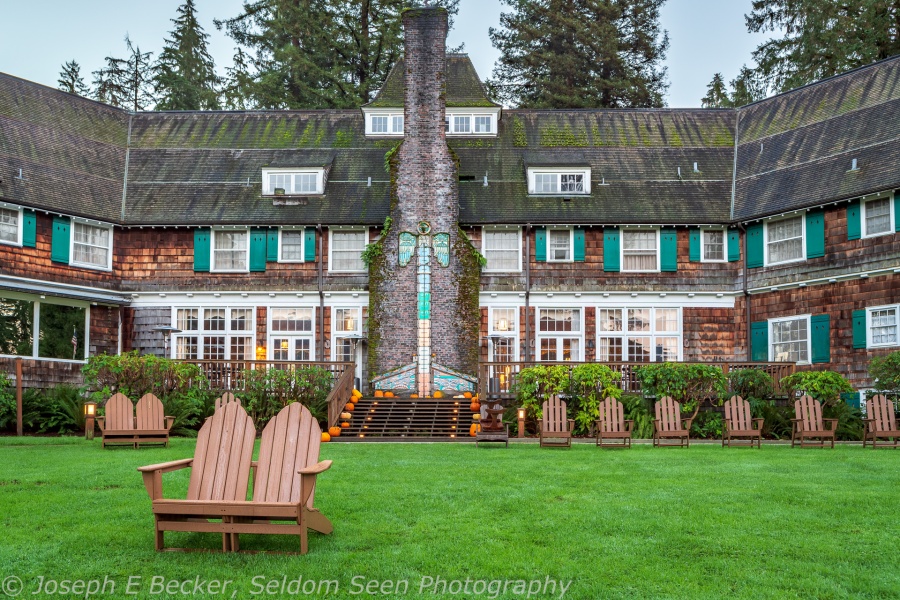 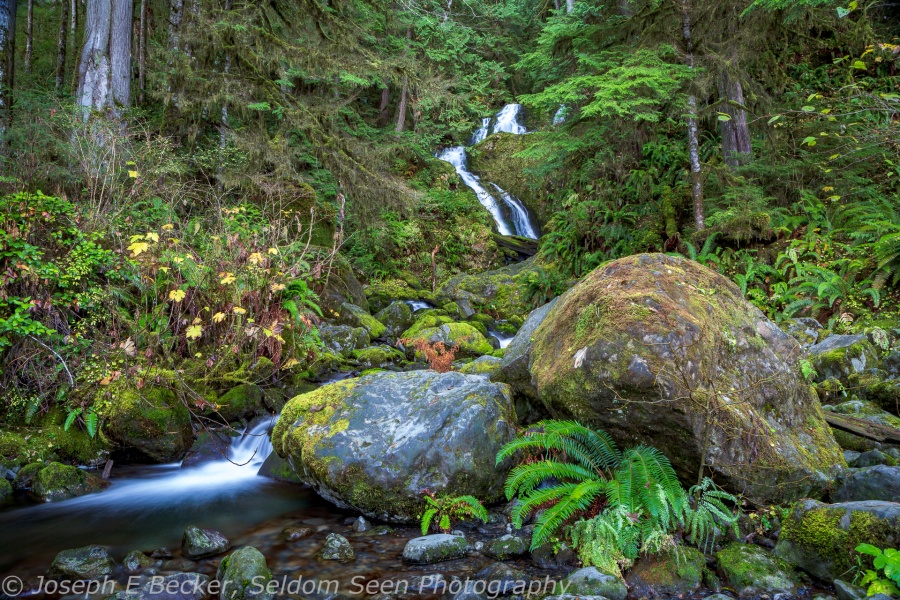 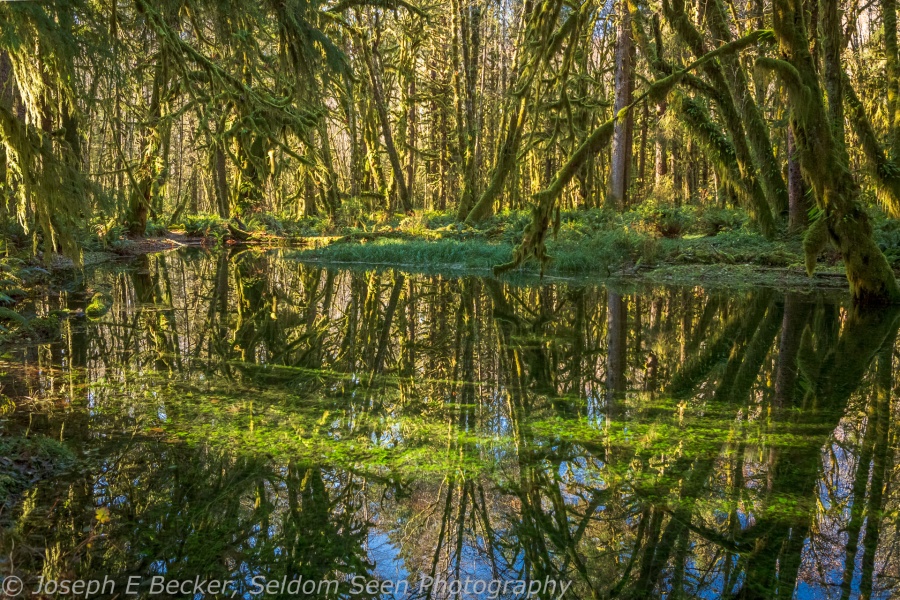 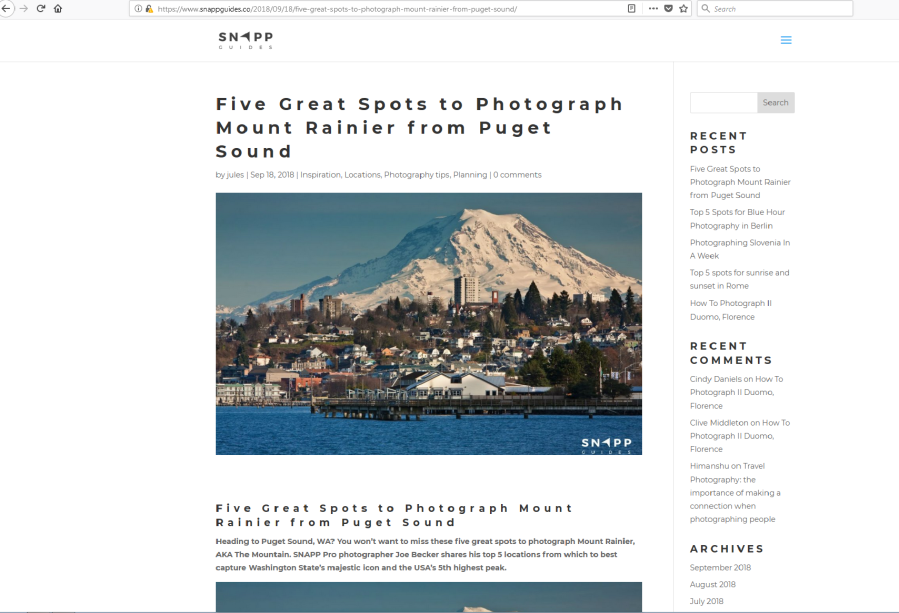 As part of the launch of my Puget Sound guide with SNAPP Guides, I wrote a blog post for SNAPP Guides describing five great spots to photograph Mount Rainier from the Puget Sound.  Be sure to check it out here, and leave a comment letting me know your favorite spots to shoot The Mountain.

I’m proud to announce my photo guide to the Puget Sound region is now available on SNAPP Guides! The guide covers 58 spots for great photography in the Puget Sound region from Bellingham to Olympia (exclusive of Seattle, which is covered in a separate guide) including 125 sample photographs. For each spot, I give advice on when to go and how to shoot the best images.

The guide is available for both Apple and Android devices. To download the guide, first go the Google Play Store or Apple’s App Store and install the free SNAPP Guide app. Once installed, you can download several free sample guides to see how it works. To download my Puget Sound guide, select Shop from the main SNAPP Guide menu and either scroll down or search for Puget Sound.

SNAPP Guides currently offers guides to 67 places around the world and more are being added (like the Palouse guide I am working on that should be available sometime next year). Each guide provides detailed information on photographic locations including what to shoot, when to go (both season and time of day), directions to get there (including GPS coordinates), a map of the location, a physical rating for the site, and what type of lenses and equipment you might use. The guides also interface directly with The Photographers Ephemeris to quickly give sunrise and sunset times at each location.

My Puget Sound guide costs $7.99. Other guides offered by SNAPP Guides vary from about $4 to $15. Below are several screen shots of the guide.

The guide opens with a main menu to browse spots, view the spots on a map, look at any spots you’ve previously marked as favorites, read about the guide, or learn a bit more about me as the author. 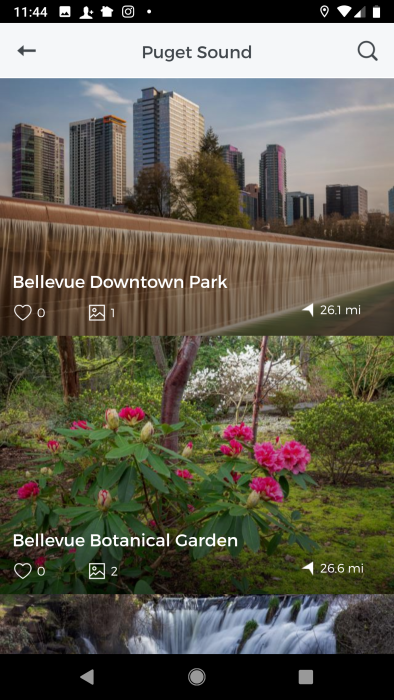 Selecting Spots from the main menu bring up the spots listed in order of distance from your present location.

Selecting Map from the main menu brings up a map with all the spots. You can zoom in to locate and select individual spots.

Selecting on a spot from either the list or map brings up the details for that location, including the day’s sunrise and sunset times and the current weather conditions.

Here’s another example. The top shows a sample photograph and tells about the spot. For most spots, you can swipe over to see more sample images. The Bloedel Reserve, for example, has four sample images. 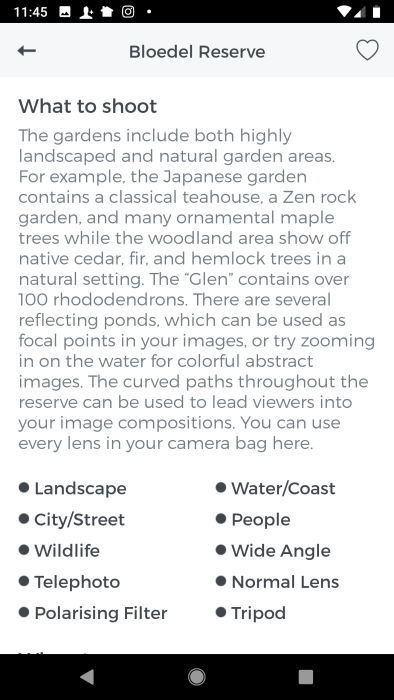 By swiping downward, you can learn about what to shoot at the site and what type of equipment will come in handy.

Swiping down further gives suggestions on when to go and other details about the spot.

Continuing downward, you get a physical rating for the spot and directions on how to get there.

At the bottom, there is a map, GPS coordinates, a link to The Photographer Ephemeris, and links to other information.

Merry Christmas from Tacoma! One of my presents came early when I found this scene yesterday during some beautiful sunny winter skies. Today, it is overcast again with snow forecast for tonight – so Tanya and I are hoping for a white Christmas in the morning. But if not, we can always get a view of snow by just looking at The Mountain (at least when it isn’t covered by clouds). Thank go out to my photographer buddy, Ernie Misner, for telling me about the location for this shot. Have a tremendous holiday season everyone! 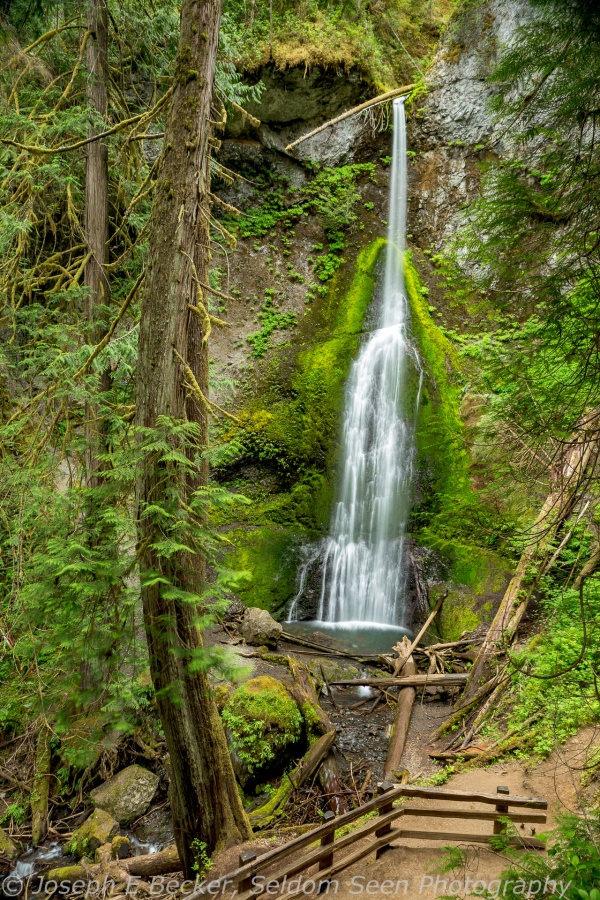 I’ve lived in Washington a long time and driven by Lake Crescent in Olympic National Park seemingly countless times (okay, perhaps several dozen), but I’ve never taken the short trail to Marymere Falls. Last week I cured this default. I left Tacoma before sunrise (and boy is that early this time of year), hoping to catch the rising sun on the Olympics from the shores of Hood Canal, but the sky was overcast and the sun rose without apparent effect. But overcast skies are great for waterfall photography, so I drove on and reached the Marymere Falls trailhead, reaching the parking lot a little after 7 a.m.

I was the first  one there, which is always a plus when photographing popular spots. And this hike is popular, and deservingly so. It travels through moss-covered old growth forest along a pretty creek to a beautiful waterfall. It is short, only 1.5 miles roundtrip, and is flat until the end, where it climbs several hundred feet to the falls.

Though it is an out-and-back trail, end of the trail near the falls has a small loop. As the trail nears the falls, it crosses over Barnes Creek (on a relatively new steel bridge) and then quickly over Falls Creek (on a classic one-person-wide wooden log bridge. From there, the trail climbs uphill and forms a small loop, leading to two viewpoints of the falls, one directly at the base, and one higher up nearly level with the top of the falls. I found the views at the lower level, and part way up from there, to be better for photography than at the upper viewpoint.

I mostly had the falls to myself, only interrupted by two sets of people who came quickly through, and I spent about 20 to 30 minutes photographing (leaving shortly before about a dozen people arrived). I spent another 20 to 30 minutes photographing in the forest on the way out. All in all, it was worth the stop, and I wondered why it took me so long to give it a try. 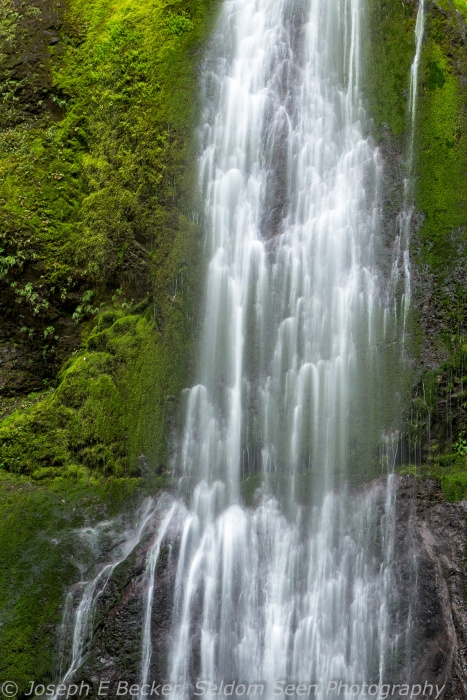 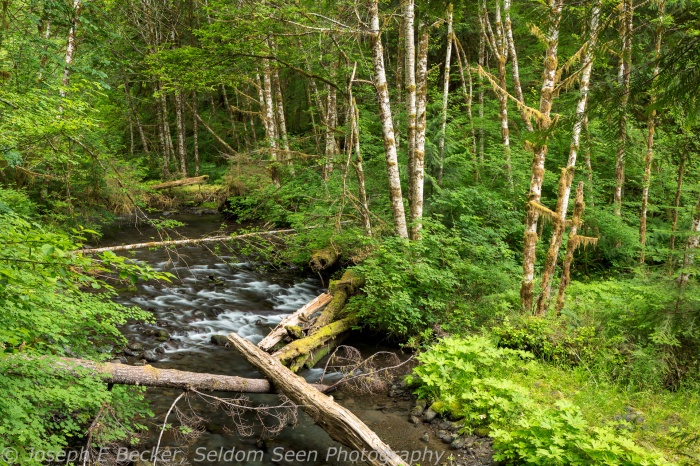 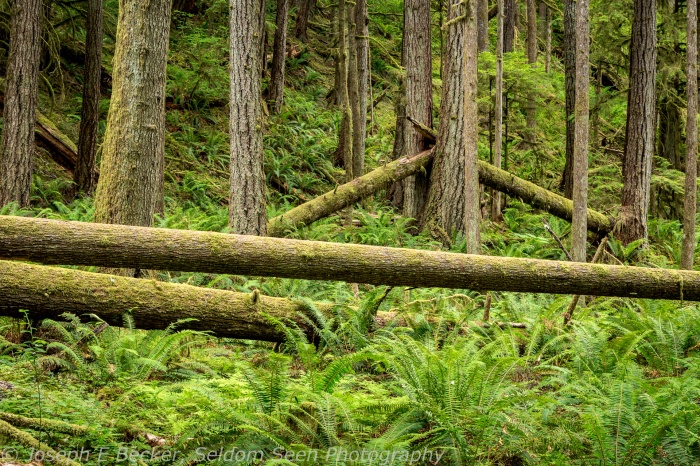 Scene in the forest along the trail. 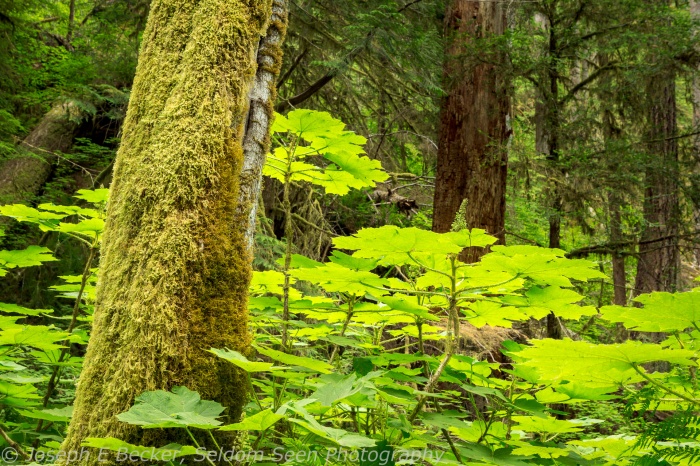 Devils club growing along the trail.

Large old growth tree adjacent to the trail. It’s hard to tell how big this tree is by this photo, but I estimate it is at least 6 to 8 feet in diameter.