I hope you are having a great summer (or winter for my friends down south). I’m not sure where the time has gone this summer. It seems like I’ve been busy, but have little to show for it. I know my time has not been taken up by photography. I sort my image in my Lightroom catalog by date, and the catalog for July only has two dates in it. Same with August – and those two were from consecutive days of a non-photography trip where the camera barely left the bag. The purpose of the trip earlier this month was a family reunion. Us Beckers gather every year the first weekend in August.

This year, the get-together was at my sister’s house in Lyle, Washington. For those of you that don’t know where Lyle is, it is a small town in the Columbia River Gorge, on the Washington side of the river, ten miles or so east of Hood River, Oregon. My sister actually lives north of town another 10 miles or so in a house with a fantastic view of Mount Adams. However, I didn’t take any shots of Mount Adams when I was there, the air was quite hazy.

Tanya and I stayed right in the town of Lyle in an Airbnb house with a view of the Columbia River. The only photograph I planned to take that weekend was the image above. I knew by checking the Photographer Ephemeris that the crescent moon would be setting directly down the gorge from Lyle. In fact, I didn’t have to travel far to get the shot. The image above was taken from the deck of our rental.

So why is this post called “Rookie Mistakes?” Because I made a mess of my photo shoot. For those of you that have been to the Columbia River Gorge, you probably know the wind blows there a lot, and the night I shot this image was no exception. So, one would think that I, being somewhat of a professional photographer, would take precautions against camera shake. Well, I thought I did. I used my sturdiest tripod, I bumped up the ISO to 800 and used wide apertures to make for shorter shutter speeds. I shot some 30 images. All of them had camera shake to a certain extent. The one above, the last image I shot that night, was the best of the lot. I used Photoshop’s shake reduction filter, and that helped, but I could have done more. I should have used a weight on the tripod. I should have left the stabilizer on my lens, which I normally turn off when shooting from a tripod, turned on. Bad mistakes. I’m lucky I had even one halfway decent shot.

Mistake number two – the moon (and the planet above it in this image, Jupiter, I think) moves fast. My shutter speeds were between 2.5 and 30 seconds. When shooting stars at night, a 30-second exposure is typically not long enough to have star trails show when using a very wide-angle lens. However, I was not using a very wide-angle lens; I was using a telephoto lens. In everything I shot with a shutter speed over 2.5 seconds, the moon was horribly blurred due to the earth’s rotation. The image above is actually a composite, the moon and Jupiter are a 2.5 second exposure, the rest is a 10 second exposure.

All I can say is that when I downloaded these images to my computer, I was very disappointed. I let the excitement of the photo shoot overwhelm good technique. That’s why it is important to get out and practice your craft as much as possible. Keep working on your technique until it becomes second nature. I guess I’m not there yet. Here I encountered two different, unrelated phenomenon that, had I been thinking properly, should have made me use a fast shutter speed. Neither did. I failed and am lucky to have anything to show. But, I learned a lesson and, hopefully, will not make these mistakes again.

Last Friday, Tanya, Nahla, and I drove down to Cape Disappointment State Park for the day. We couldn’t have asked for a better early Spring day. Other than a brief rain shower on the way down, the day was sunny and warm (for early March anyway). We were extremely lucky weather-wise, Friday was the only day without significant rain in the week. Rainfall totals at Astoria, Oregon, the closest weather station to Cape Disappointment, over the past week were 0.33 inches on Monday March 3rd, 0.15 inches Tuesday, 1.43 inches Wednesday, 0.33 inches Thursday, 0.03 inches Friday, 1.38 inches Saturday, and 0.86 inches Sunday. 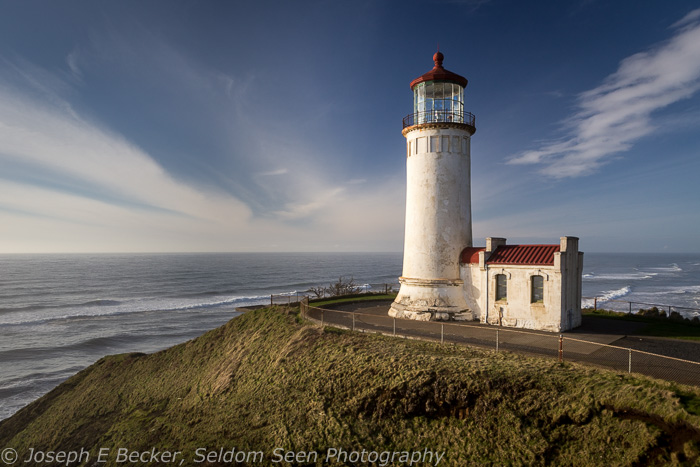 Cape Disappointment State Park, which is also part of the Lewis and Clark National Historic Park, is one of Washington’s larger state parks covering 1,882 acres. It offers 2 miles of ocean beach, two lighthouses,  and old-growth forest. The park is located at the very southwestern tip of the state, at the mouth of the Columbia River. The park encompasses two rocky headlands, North Head and Cape Disappointment, both with their own lighthouses. Between the two is a broad, sandy ocean beach. An ocean coast with both headlands and sandy beaches is unique in this part of the state. The coastline to the north is mostly either low sandy beaches or shallow estuaries, without headlands, for the next 70 miles. I have nothing against broad sandy beaches, but for photography, headlands are generally much more photogenic.

The key photographic highlights of the park are the two lighthouses. Cape Disappointment Lighthouse is the oldest lighthouse on the United States west coast, guarding the mouth of the Columbia River. The lighthouse is reached via a 1/2 mile trail from the parking lot for the Lewis and Clark Interpretive Center at the southern end of the park. (The interpretive center, by the way, is one of the better Lewis and Clark museums in the Northwest, if not the whole country.) The trail approaches the lighthouse from the east, and the lighthouse is not visible from the trail until near the end of the trail. Further, the approach is from below the lighthouse. These factors make the lighthouse backlit for most of the day from the approach, and the ocean is not visible beyond the lighthouse until reaching its base. Space is extremely limited on the northern and western sides of the lighthouse and non-existent on the southern side. Additionally, there is a more modern, small boxy building just to the west of lighthouse. All these restrictions make it difficult to photograph the lighthouse near its base. However, the walk out to it is worth it for the view – the wide, sweeping expanse of the Columbia River entering the Pacific Ocean, with the Oregon coastal mountain range to the south. The mouth of the Columbia contains some of the most hazardous waters on the west coast, and the Coast Guard keeps a close watch on ships and fishing and pleasure boats entering and leaving the river.

In fact, the small building is manned by the Coast Guard. When we were there, the seaman in the station invited us inside to look through his binoculars (I don’t know what size lenses these things had, but if I had to guess, there were at least 600 mm; ie. they were huge) and tell us about his job. We talked about the waves, how big they get, and what it’s like bust through them on a small boat while doing surf training or going on a rescue. If the Coast Guard is surf training when you’re there, with a long lens, you should be able to get some great shots of  boats busting through and over breaking waves from the lighthouse. 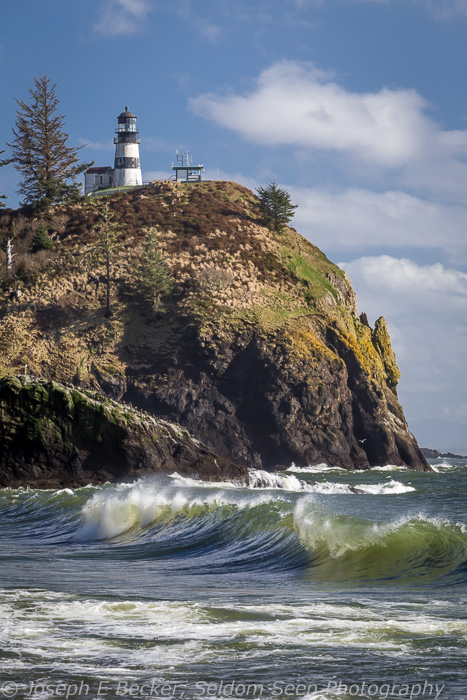 The best shots of the Cape Disappointment lighthouse itself, however, are not from near the base, but from beach level. The view from just to the west of Waikiki Beach ( a small beach, complete with big waves and surfers, just not the same climate as its more famous cousin) is particularly good. Because this is north of the lighthouse, the best light will be late in the afternoon and near sunset. You can try to capture waves crashing against the rocks beneath the lighthouse or frame the lighthouse with driftwood. Another possible, and more elevated, shot is from the interpretive center, again with the best light in late afternoon or near sunset.

The North Head lighthouse, located near the northern end of the park, has a bit more room around the base, making photographs possible from more angles close to the base. The lighthouse is accessed from a 1/4 mile trail from the historic lightkeeper’s and assistant lightkeeper’s houses and nearby parking lot.  The North Head lighthouse sits a bit lower than the much of the land near it, so it is much easier to get a shot of the lighthouse with the ocean in the background than is possible at Cape Disappointment (okay, it’s probably impossible to get that type of shot at Cape Disappointment unless you have a plane or a drone). For example, you can easily walk up the hill behind the lighthouse and capture it with the setting sun over the Pacific.

Other good shots of the North Head Lighthouse can be taken from the beach south of the lighthouse and from an extension of the headland north of the lighthouse. To access this northern area, take the paved trail from the lighthouse parking lot to Bell’s View. Near the wooden view platform, wander off the trail to the west and pick up the informal trail which ends at a small cement pillbox (left over from WWII). But be careful, you’ll be near the edge of a cliff, and it’s a long way down to pounding surf below. While there, it’s also worth taking a peak at Bell’s View, which is northward to the seemingly endless beach and surf on the Long Beach Peninsula.

Other opportunities for photography include the beach between the two headlands, views of Deadman’s Cove along the trail to the Cape Disappointment lighthouse (beach access is not allowed), old growth forest (probably best on the North Head trail), historic artillery bunkers (the park was home to Fort Canby, active from 1852 through the end of World War II), and potentially wildlife. And if you like small fishing towns, visit the harbor at Ilwaco, which is located just outside the park.

Tanya and Nahla playing on the beach. 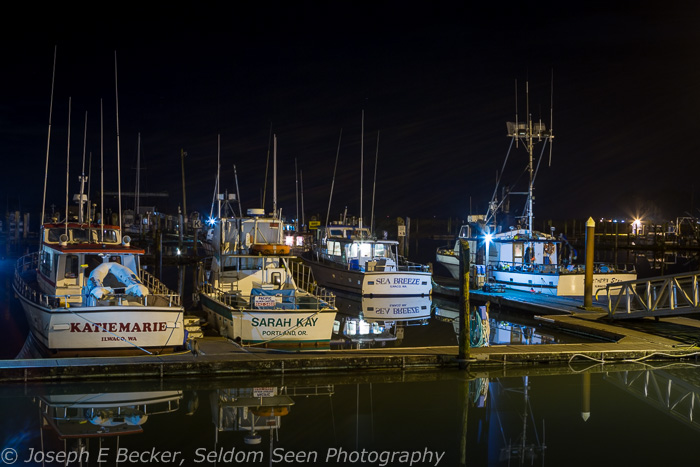 Fishing boats in the harbor at Ilwaco