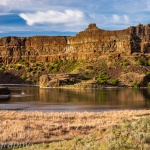 Last week, as part of the gradual easing of its stay-at-home order, Washington State opened up the majority of state parks for day-use only. Knowing that I was going into photography withdrawal, Tanya suggested we head out on a photo day. Even though the parks were open, it was suggested people stay local. Well, local is a relative term, and being a Westerner, I don’t mind driving several miles – in this case 200 miles one way. Is that local? It was still in the State of Washington and we didn’t need to stay overnight – that’s local to me.

So last Saturday we packed up a picnic and the camera gear and headed off to Sun Lakes – Dry Falls State Park. Why there? One, it has the raw beauty of the channeled scablands. But perhaps more importantly, I thought there wouldn’t be as many people there as in closer state parks. The weather was sunny and warm, and there was bound to be more than a few people out enjoying the state parks on this first weekend since the pandemic started that they were open. And while there were a fair number of people at the park, the park’s parking lots was not crowded – unlike the several hiking trailheads we passed on the way over the mountains that were overflowing with cars. In fact, the parking for the trail we took in Sun Lakes State Park only had one other car (out of four parking spots – so with us, it was half full; is that crowded?).

Sun Lakes State Park is located in the Grand Coulee. The park itself contains at least four lakes, and there are a number of other lakes further down the coulee. That gave this trip the added bonus of having a place to stop before reaching the park for me to fly my drone (drones are not allowed in Washington State Parks without a permit) while Tanya took Benson, our 8-month old, 102-pound Newfoundland, on his first swim. We picked a spot along Alkali Lake, and while Tanya and Benson frolicked in the water, I checked out Alkali Lake and Lake Lenore from the air.

Then it was on to Sun Lakes. The state park has a developed camping (closed) and day-use area on Park Lake with nice green grass and large shade trees. Instead of stopping there, we took the road to Deep Lake, which is developed with a small picnic area with natural vegetation and a boat launch. There were about 10 cars there and several dozen people swimming or fishing in the lake. So instead of taking the lakeside trail, we decided to take the Caribou Trail with climbs the hillside above the lake (not sure why it is named the Caribou Trail, caribou are definitely not native to this desert terrain).

Though I’ve been to Sun Lakes perhaps a dozen times before, I had never been to Deep Lake or on the Caribou Trail, so this was new territory to me. I knew the trail climbed above up toward the top of the coulee, but I didn’t know if it had a view of Deep Lake from up there. It is a relatively short trail, and the official trail ends when reaching the top of the cliffs. No view from there. So we kept walking on a faint unofficial trail, and then, eventually, set off cross country to find a view. And sure enough, we found a view of Deep Lake far below. We sat on the rocks, pulled out our water bottles, and drank in both water and scenery.

After shooting for 15 or 20 minutes, we headed back down the car. We don’t quite have our car setup organized well with the new dog yet. Trying to fit the dog and all the camera gear in the car along with food and drink (which must be separated from the dog) is a challenge. I decided to pack the camera backpack in a different spot after the hike, to be loaded after the dog got in. Unfortunately, after loading the dog, I forgot about the bag and started to back out onto the road only to run over something. You guessed it, my camera backpack!

Luckily, my camera was not in the pack, and a quick check didn’t show anything broken. We drove back to Deep Lake for our picnic dinner. There were a few less people, and we got a picnic table isolated from others. While eating, I checked out the gear in more detail. All the lens seemed to be working okay. However, there are cracks on a portion of the barrel of the Tamron 150-600 mm zoom. Also, the split neutral-density filter is history. Hopefully the lens can be repaired (currently the Tamron repair shop, which is in New York, is closed due to the pandemic).

After dinner, we drove over to Dry Falls Lake, which, not surprisingly, is located at the base of Dry Falls. It was an hour or so before sunset and the light on the cliffs of Dry Falls was particularly nice. The featured shot above is a 4-shot panorama of Dry Falls and Dry Falls Lake.

If you plan on making the trip out to Sun Lakes – Dry Falls State Park, be forewarned that the road to Dry Falls Lake is extremely rough. We did okay in our SUV, and I do think most regular passenger cars would make it, but some cars without much ground clearance could have difficulties. The road to Deep Lake is paved.

We left before sunset so we could get home before 11 pm. All in all, even with the the misadventure with my camera backpack, it was a good day. As always, I welcome your comments.

The view of Deep Lake from near the end of the Caribou Trail.

Telephoto shot of some of the cliffs along Deep Lake.

This is the west end of Deep Lake. The picnic area is in the cottonwood trees next to the boat launch. 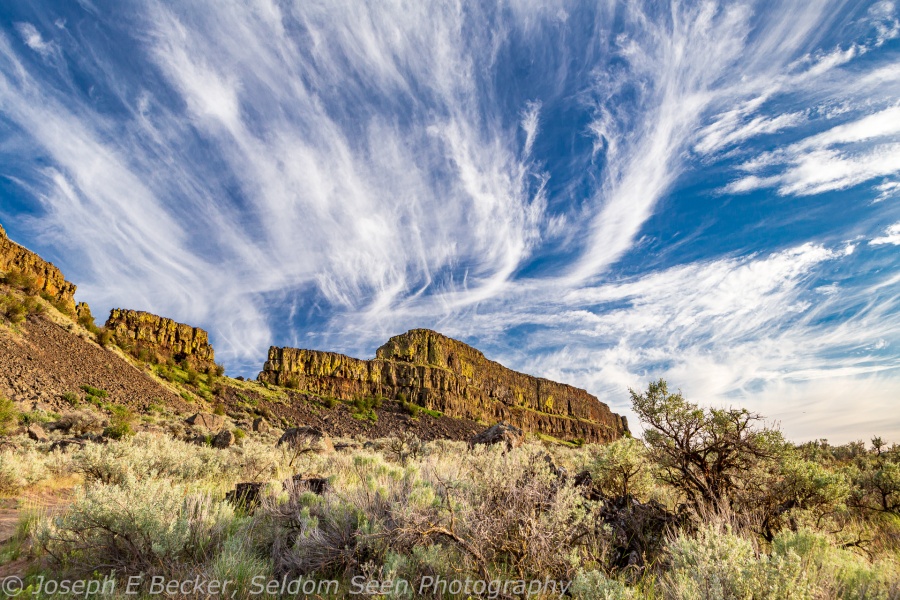 Some of the cliffs near Dry Falls Lake. 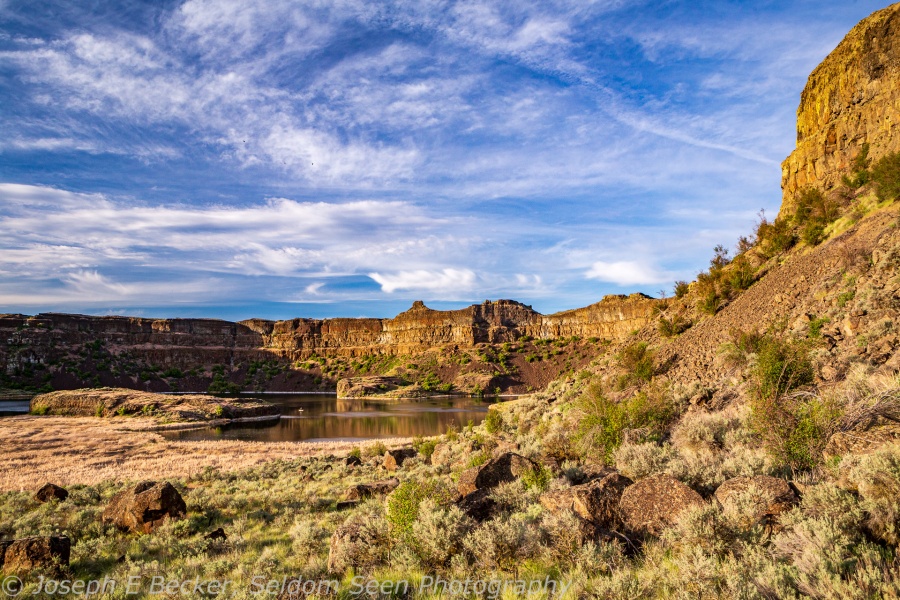 Last week Tanya, Nahla and I decided to ditch the on-again, off-again rain of western Washington and drive to someplace dry. We chose to visit Steamboat Rock State Park in eastern Washington. In particular, we wanted to take the hike up Northrup Canyon, and I wanted to get some shots of Steamboat Rock and Banks Lake. We also made a stop at Sun Lakes-Dry Falls State Park to take in the view of Dry Falls.

Steamboat Rock is a massive basalt monolithic butte that stands 800-feet tall in the middle of Banks Lake. Banks Lake is a 27-mile long artificial lake created as part of the Columbia River Basin Project created in the Grand Coulee, a 60-mile long, mostly dry (except for Banks Lake) desert canyon carved in the Ice Ages by the Columbia River and massive glacial floods. Near the southern end of Banks Lake stands Dry Falls. Though now dry (big surprise there), Dry Falls is the site of the greatest known waterfall ever to exist on Earth.

The whole area is geologically fascinating (especially for a geologist like myself). One of the better, short histories of Steamboat Rock and Grand Coulee can be found on the HistoryLink website. Even without caring about the area’s geologic history, it is a fun place to photograph – especially because it is so different from elsewhere in the Pacific Northwest and indeed the world as a whole. (The area is part of the Channeled Scablands; the nearest equivalent landscape is on Mars).

Yet, being in a desert, and with the rocks being black, it can be a tough place to photograph, especially in the middle of the day. Contrast is extreme. It is typically windy, which can make it dusty as well. Morning is perhaps the best time of day to photograph, before the sun is too high in the sky. Additionally, the wind is usually calm in the morning. Late afternoon and evening also makes for good photographs.

Season wise, in the summer, it is very hot, and in the winter, quite cold. The best time of year to photograph the Steamboat Rock area is spring, especially during the fairly short wildflower blooming season. Some portions of the area can also be colorful in the fall when the cottonwoods and aspens turn color – however, there aren’t too many trees unless you know where to look.

One of those places is Northrup Canyon. Northrup Canyon is within Steamboat Rock State Park and is a fine, short spring hike. Unfortunately, when Tanya, Nahla and I took the hike last week, we were a bit early for the wildflowers and the aspens in the canyon where just starting to leaf out. So we missed some of the color that will be present later this month (mid-April through early May are probably the best times). However, I find the canyon walls fascinating, and the hike leads to an old homestead, so I had plenty to photograph.

There is also a hike to the top of Steamboat Rock, which we left for another day. Not surprisingly, I’ve heard the views of are excellent on the top of the rock. Reportedly, it also has a good wildflower display in the spring. Rather than hiking to the top of Steamboat rock, I concentrated on taking some sunset photos and early morning photos of the Rock from pullouts along the highway. Because of the direction the rock is situated, the portion of the rock facing the highway is in shadow late in the day, making the best time to shot the rock in early morning unless you have a good sunset directly over it (when I was there, the sun set directly over the rock; later in the summer, it will set further north).

We could have easily spent another day or two exploring the area, but we had to drive on to Spokane to see my Dad. If you visit, there is a very nice campground at the state park and motels in the nearby towns of Electric City, Grand Coulee, and Coulee Dam. These towns are less than 10 miles from the park. Dry Falls is another 25 miles past Steamboat Rock. And, in case you couldn’t guess from the names of the nearby towns, Grand Coulee Dam – a true engineering wonder of the world – is also in the area (between the towns of Grand Coulee and Coulee Dam). Good views of the dam can be found at the visitor center and at nearby Crown Point Park. 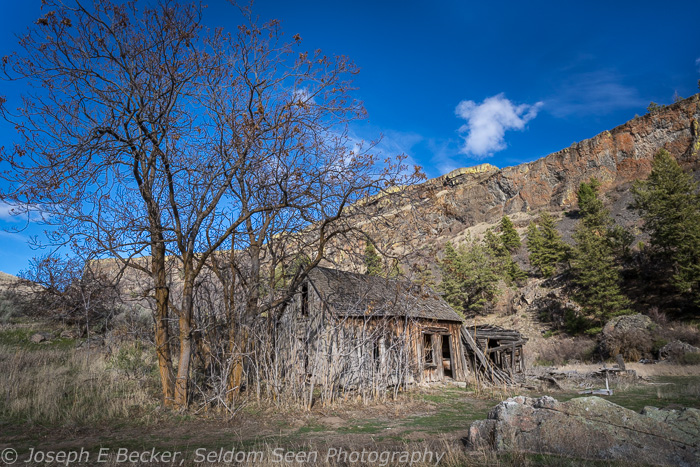 Another view of the old homestead, Northrup Canyon 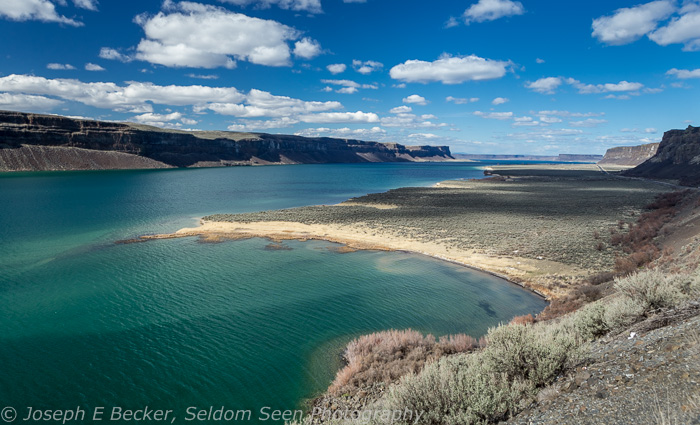 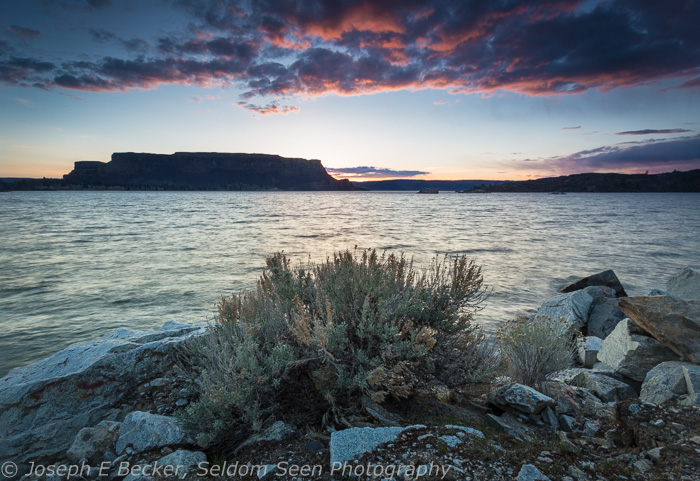