Out of the Smoke and into the Fog

Seattle, widely known for its rain, has had 0.03 inches of rain so far this September. Combined with no measurable rain in August, we’ve had one of the driest periods on record. Nor is rain falling much elsewhere in Washington State. All month-long there have been forest fires burning in the mountains and eastern Washington, and the smoke is really messing up the air quality. So when I took a day off to go do some photography earlier this month, I decided against going to the mountains which are full of smoke and instead Tanya, Carson and I headed for the beach. We decided to head for Kalaloch and Ruby Beach in Olympic National Park, a 3-hour drive from Tacoma. It’s 156 miles from my house to Kalaloch, and only the last 5 miles is along the ocean. And when making the drive over, it was sunny and the closer to the coast we got, the less smokey the air was. Then, at approximately mile 151 from my house, we entered a fog bank. That’s right, all this sun all over the whole state, and the beaches along the Olympic coast were fogged in. The good news for photography – no boring totally blue skies. The bad news for photography – no great sunset shots either.

We spent the first part of our trip at Ruby Beach, which has some nice sea stacks and a creek on the beach. The fog made for some interesting compositions, and several other photographers also had their tripods out. We walked north on the beach. The fog closed in around us, and it was if we were alone in the world, just the ocean on one side and a wilderness forest on the other. No sounds but the crashing waves. Hunger eventually drove us back to the car and we headed back down the highway to find a viewpoint where we could eat a picnic dinner with a view, or as much of one as the fog would allow.

It was nearing sunset, and the fog bank started to roll off shore such that it wasn’t actually fogging on the beach, but the fog still blocked the sun. Ever optimistic and still hoping for a good sunset, we stopped in at Beach 4 (which is between Kalaloch and Ruby Beach). No luck on the sunset, but as it was shortly after low time, there were tide pools to explore and starfish to photograph.

All in all, it was a good day, and I didn’t have to worry about forest fire smoke ruining my photographs. Given the choice of smoke or fog, I was happy to have the fog.

The view where the trail from the parking lot comes out at Ruby Beach. The whole state of Washington is sunny except within a couple hundred meters of the Pacific Ocean. 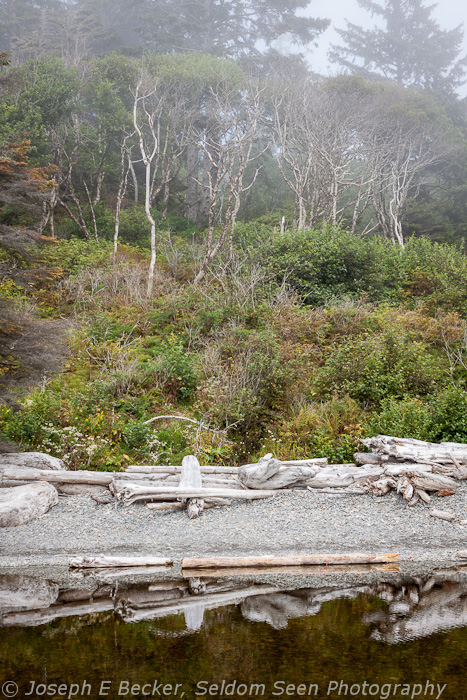 View of the forest above Ruby Beach