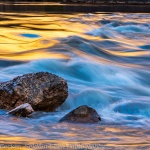 It’s high time I finished my series on rafting the Grand Canyon now that it is December and I’m about to head off on a new adventure (Christmas in Toronto). Part 4 covers the lower canyon (you can see the earlier posts in the series here, here, and here.) Granted the lower canyon is typically defined as the portion below Whitmore about river mile 187 to Pearce Ferry at river mile 277, this post covers a bit more, from below Deer Creek at river mile 136. Above Whitmore, there are several major attractions as well as the largest rapid in the canyon, the feared Lava Falls. But below Whitmore, there is still plenty to see, even though this section of the river is less traveled (many trips take out at Whitmore; others at Diamond Creek at about mile 225).

The next major “must see” site after Deer Creek is Matkatamiba Canyon at river mile 148. Matkatamiba, also known as Matkat, is a gorgeous and photogenic narrow limestone canyon on river left. The entrance to the canyon is narrow, so that not all trips stop here, and is also easily missed. I can attest to it being easily missed, as I found out on my recent trip, when the raft I was on, not seeing the rafts ahead of us pull in, sailed right by. I do have fond memories of it from earlier trips, however. The canyon presents a twisting layered limestone narrows section close to the river that requires some chimney climbing, so leave large camera bag in the boat. The canyon can be dark, any you’ll probably not have your tripod, so crank up the ISO.

Matkat is followed, at river mile 156 by Havasu Canyon, also on river left. Havasu is a day tripping site for nearly every raft trip because of its beautiful blue-green waters, travertine ledges, cascades, and stunning water falls. The hike up the canyon to the lowest of the water falls, Beaver Falls, is about 3 miles and Mooney Falls another 5 miles or so. It’s a significant round trip hike, and most rafters stop at or below Beaver falls. Even without visiting the waterfalls, the creek and canyon is more of the most beautiful spots in the Grand Canyon, if not the world. Unfortunately, due to COVID and the resulting closure of the Havasupai Indian Reservation, we were not able to stop and visit Havasu Canyon on my trip last March.

The land on the left bank of the river from mile 164.5 through 273.5 is part of the Havasupai Reservation, and was partially closed to our trip due to COVID. Hopefully it will be open when you make your trip. The first photo worthy stop on the reservation is National Canyon, where there is a nice short hike with limestone narrows and pools of water at National Canyon at river mile 166.

At river mile 178 is Vulcan’s Anvil, a black volcanic plug sticking out of the middle of the river. Though not super photogenic, you may want to get a shot as a reminder of what lies ahead – Lava Falls.

Lava Falls, the most formidable rapid in the canyon, occurs at mile 179. You know you are close after you pass Vulcan’s Anvil and you can hear the roar of whitewater but you can’t see any, with the river disappearing below a “horizon line” line ahead. That horizon line represents the top of the rapid, which drops 37 vertical feet over several hundred horizontal feet. It is reported by the Guinness Book of World Records as the fastest navigable water in all of North America. Rated as class 10 (on a scale of 1 to 10), it is a wild ride that can flip even the most experienced rafter.

The rapid is usually scouted on the right, where trails lead to a perch overlooking the top of the rapid. From the scouting position, you may wonder how any raft can make it through without flipping. And many do (do a Google search for “youtube lava falls flip”). With luck, you can shoot the action as another group or a portion of your group attempts the rapid. You’ll probably want a telephoto zoom to shoot rafts taking on Lava Falls, the top of the rapid is fairly close to the viewpoint, while the bottom is distant. You may also want to shoot with shutter priority with a shutter speed of 1/250th or faster, possibly with a partial to full positive stop of exposure compensation to account for the white water, or shoot on manual mode.

When it’s your turn to run the rapid, seal the camera in its waterproof container, strap it in well, and hang on! On my trip earlier this year, no rafts flipped, though a few of my fellow rafters got tossed into the maelstrom. Many trips stop at a river-right beach, known as Tequila Beach, below the rapid to celebrate a successful run. Pull the camera back out and shoot the celebration (while also take a few tequila shots yourself).

About eight river miles below Lava Falls is Whitmore Canyon. Many end their Grand Canyon trip at Whitmore, where there is a trail up to the rim (two of my group hiked out here), and a helipad used by some commercial trips for flying their clients out. Yet, if you can, keep going past Whitmore, there are still about 90 miles of Grand Canyon left. You won’t have any more huge rapids (but plenty of smaller ones), and final 37 miles of so is on the slow currents of upper Lake Mead, but the scenery is still great.

At river mile 199 you’ll pass Pumpkin Spring on river left. The spring has built up a wall of colorful orange travertine above the river. At the top, inside, you will find the milky green water of the spring, which contrasts nicely with the orange rock. The green water is not visible from the river, so you’ll have to stop to photograph it. Alas, on my trip earlier this year, we did not stop.

The river enters Lower Granite Gorge around mile 216. The gorge is formed by black schist interlaced with red granite, and you can capture some abstract looking shots as you float by. Eventually the gorge opens up with views of the scenic and distinctly shaped Diamond Peak. At mile 226 is the Diamond Creek takeout. Most commercial trips that didn’t takeout at Whitmore take out here. Many private trips do as well. It is also the launch site for day trips through the lowermost canyon, so river traffic may actually increase below Diamond Creek.

The next landmark is Travertine Falls at river mile 229. It forms an impressive and colorful wall of travertine. It is worth a stop to shoot (though we did not on our trip due to it being crowded when we floated by). At mile 240 is Separation Canyon, where several members of Major Powell’s first trip through the canyon left the river (and were never heard from again) rather than go through the biggest rapid of the canyon, Separation Rapid (now drowned under the water of Lake Mead). There is a memorial marker on the rocks above the river on the southern side of Separation Canyon.

Lake Mead formerly extended up to Separation Canyon, but with the decades long drought in the Southwest, that is no longer the case. The river continues with current all the way to Pearce Ferry, but the rapids are gone, buried by sediments deposited when the lake was higher. For this final stretch of the canyon, motors are allowed year-round, and our trip tied the rafts together and got out an outboard motor to help speed us down to the takeout.

While the canyon is still impressive in this final 37 miles, the sediments left by Lake Mead when it was bigger mar the canyon along the river. These sediments make steep banks and cliffs (growing every taller as you travel downstream) along the river which occasionally “calve off” into the water as the river continues its erosional job. There is one last photographic stop, the pretty Columbine Falls at about river mile 274.5. It is located via a short hike on river left. Though impressive, the falls are now about half their former height, reduced by sedimentation from Lake Mead.

At mile 277 is Pearce Ferry, the final practical takeout (there is another takeout further downstream, but shortly past Pearce Ferry is the newly formed and very nasty Pearce Ferry Rapid, created when the river cut a new channel, rather than resuming its old channel, through the lakebed sediments and encountered bedrock). Pearce Ferry is, in my opinion, rather a hot and dreary spot, and while you may want to document the end of your trip as the boats de-rig, the location itself is not much to look at.

Here are some more shots from the lower canyon.