On Christmas Day, Tanya received a phone call from a friend of ours. The friend and partner had been in a car accident on the Oregon coast and were in the hospital in Tillamook, though luckily the injuries appeared to be minor. Their car, on the other hand, was totaled. Was it possible for us to drive down and pick them up? Both Tanya and I love the Oregon coast, so it wasn’t too hard for us to agree to drive down.

We drove to Tillamook the day after Christmas. I hoped to get some sunset shots on the coast that day, but by the time we checked the friends out of the hospital, it was getting dark. Besides, it was raining. Maybe at sunrise the next morning? The friends wanted to sleep in, so perhaps I’d have time in the morning to run to the beach.

Tillamook itself is inland off the coast, but it is close to three capes and many beaches. The Three Capes Scenic Route leaves Tillamook and is extremely scenic. I’ve driven it several times, and I highly recommend it. However, last week I only had a limited amount of time, so I picked Cape Kiwanda, the southernmost of the three capes, to go to. Cape Kiwanda is quite unusual for the Oregon coast. It is formed by an yellow to orange sandstone, unlike the black volcanic capes common elsewhere on the coast. Plus it is more accessible and not totally tree covered like the other capes. I have been there once or twice before, but never had time to explore it beyond the adjoining beach. I also picked it because of an added bonus of high tide occurring in the morning – perfect for capturing images of waves crashing on the rocks.

The Punchbowl shortly after sunrise.

I got up early and convinced Tanya to come with me. We drove down to Cape Kiwanda, about 25 miles south of Tillamook. We got there about 7:45 a.m., a little before sunrise. It was raining, but at least it wasn’t completely overcast like the previous evening. There were even a few patches of blue sky  and pastel-colored clouds to the northwest. I bundled up against the wind and rain, walked down the beach to the cape.

Cape Kiwanda is formed by sandstone cliffs jutting out into the water and a large, tree-topped sand dune plastered against the mainland. It is not large as far as Oregon capes go, it only sticks out into the the ocean from the beach perhaps a 2,000 feet. Nor is it tall, with the sand dune rising to a bit over 100 feet in elevation and the sandstone cliffs being half that. It is quite easy to walk out onto the cape by traversing the side of the sand dune from the beach up to the top of the sandstone.

The first thing one notices when climbing up onto the cape is a fence with warning signs attempting to keep the public from getting near the cliff edges. The fence is very easy to cross (in some places, sand has piled up against it so you can easily step over without any effort). But don’t be mistaken, Cape Kiwanda is a dangerous place. IT is perhaps the deadliest place on the Oregon coast; six people have died deaths there in the past two years. The pounding waves of the Pacific easily erode the sandstone cliffs, which helps create their natural beauty, but also makes them unpredictable. The edges of the cliffs can collapse at any time. As a geologist, I agree getting near the edge of such cliffs, particular when waves are hitting them is foolish. Additionally, it contains an area known as the Punchbowl – an inviting rocky cove with a sea cave that becomes a cauldron of white water  at high tide.

The waves aren’t the only factor in eroding the cape. It’s famous hoodoo, known as the Pedestal or Duckbill Rock, was destroyed by vandals in 2016. What a waste. (This is another example of photograph it while you can because you will never know if you will have another opportunity.) Prudence is definitely called for if you venture beyond the fence. However, I freely admit I did to get the shots shown here, though I was careful to stay away from the edge.

By the time I hiked up onto the cape, the rain had stopped, though the wind was still blowing hard. I set up my tripod and shot the Punchbowl from a couple different angles, trying to capture the fury of the waves. Though I shot a few images with slow shutter speeds to create water blurs, I was worried about the wind causing camera shake, even with the tripod, so I increased my shutter speed and ISO setting (with the sun covered by clouds, it was a bit dark). I moved around a bit and found a nice view of a sea arch being pummeled by crashing waves. Unfortunately, the rain returned with a vengeance, and I packed up the camera for awhile. But just as quickly as it came, the rain let up, and I continued shooting. The sun even came out for about five minutes, lighting up the tops of the cliffs.

I was running short on time (we needed to get back to Tillamook to pick up our friends), so I huffed up to the top of the sand dune for a quick overview and then headed back to the car. I easily could have spent several more hours there. Tanya and I headed back to town, picked up our friends, made a visit to the cheese factory (a seemingly mandatory stop in Tillamook), and drove back to Tacoma. It was a quick trip, the result of an unfortunate accident that, based on the shots I later pulled up on my computer, had real Kiwanda benefits.

The northern side of Cape Kiwanda

The southern end of Cape Kiwanda with Haystack Rock in the distance as seen from near the top of the sand dune. You can see the warning fence in the foreground.

Sunbeams on the town of Pacific City as seen from Cape Kiwanda. 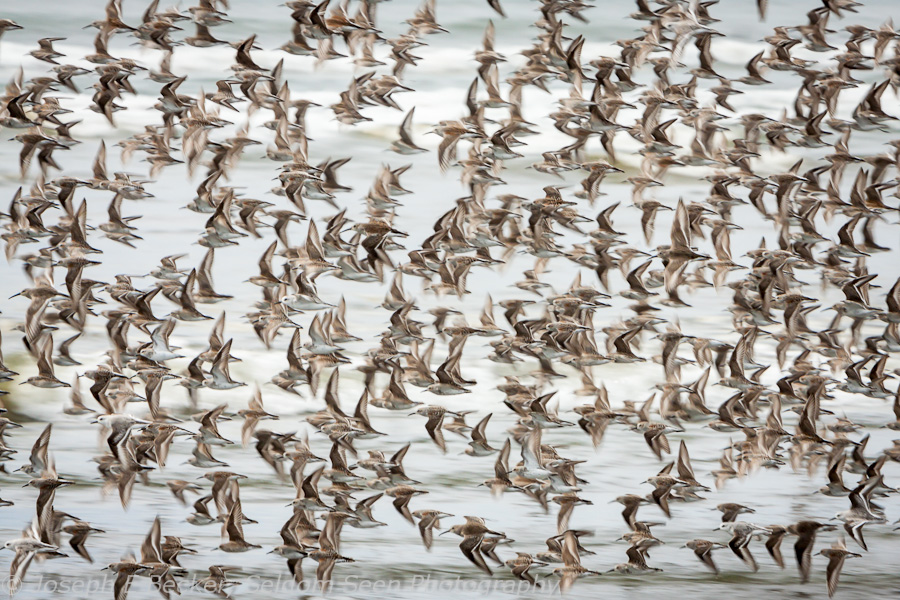 On April 15th and 22nd I traveled to Ocean Shores. Ocean Shores is a small beach town along the central Washington coast. It has the closest Pacific Ocean beach to the Seattle-Tacoma metropolitan area. The purpose of my trip was to drop off, then pick up, several images I had in the Ocean Shores photography show. Though I usually enter this show every year, for the first time this year, the show was juried. I was proud to have four images accepted. My black and white skunk cabbage image (previously featured in this post) won an award of merit.

One can’t go to Ocean Shores the town without visiting Ocean Shores the beach. Truth be told, it’s not my favorite beach. I prefer vehicle-free beaches bordered by rocky headlands, with crashing waves and critter-filled tidepools. The beach at Ocean Shores is a broad, wide swath of sand backed by small dunes partly covered with sharp grasses. Plus, as far as Washington beaches go, it is fairly crowded with people, cars, mopeds, and horses. But it is a beach, after all, and cannot be passed up!

My first trip there last month, Carson was my companion. Carson and I walked on the beach for an hour or so, as I tried to get some shore birds shots. Getting close enough for a decent shot was tough, even using my 70-200mm zoom with 1.4x teleconverter. There is no place to hide as you approach the birds, and being trailed by a black dog the size of a small bear doesn’t help. Carson eventually got tired of following me around and just sat down. And the birds eventually got use to Carson and I and allowed me to get close enough for a few shots. They even started moving in around Carson, which I though funny since they kept flying off if he got remotely close before.

On the second trip, Tanya accompanied Carson and I. There were less shore birds about, but it was mostly sunny and the sky held some interesting clouds. I took out the camera, but only ended up taking a few images (including the sunny one below). Instead, the three of us just walked by the ocean, enjoying a nice spring day at the beach.

I hope you enjoy these images from the beach. 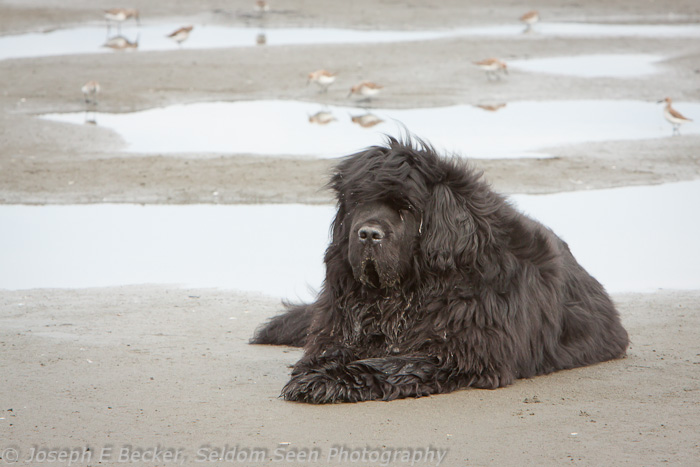 Carson takes a rest, and the birds move in behind him.

I like the big birds, but have no idea what kind the are. For that matter, I don't know what the small ones are either. Anyone out there know?

Sun and clouds at Ocean Shores