Irene is from Vancouver, British Columbia and is learning photography a little later in life than most. It’s too bad she didn’t take it up earlier, she has a great eye for composition. Earlier this month I taught Irene during a personal, one-day workshop for in Seattle. I also taught her during a workshop earlier in the year, and on this return visit she wanted to see a few spots she read about in my ebook, Scenic Seattle. Specifically, she wanted to visit Union Station, Pier 65, and the Seattle Great Wheel. Based on the weather conditions during our workshop and her personal interests, I also took her up to the University of Washington. At several of the spots, we worked on long exposures for a separate class on the subject she taking up in Canada. A few photos I took during the day are presented here to illustrate this post.

If you plan on visiting Washington State and would like personalized instruction and/or guidance, I offer personalized workshops for $325 per day in the Puget Sound area and $375 per day elsewhere in the state. I also offer workshop for small groups. Each workshop is tailored directly to your interests.

Still visiting, but not quite up to a workshop? Then consider purchasing my Seattle ebook, which sells for a mere $5.99. I’ve added a page to my blog which shows some sample pages from the book and allows direct ordering through PayPal.

During her workshop in Seattle, Irene wanted to visit Union Station. Here she is lining up a composition. 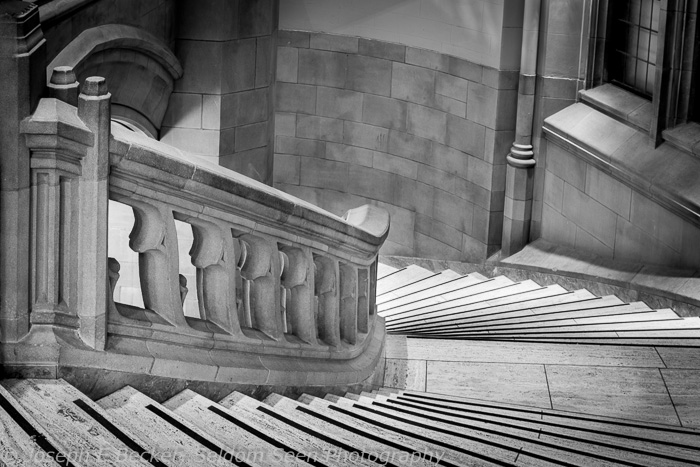 The Grand Staircase inside Suzzallo Library at the University of Washington 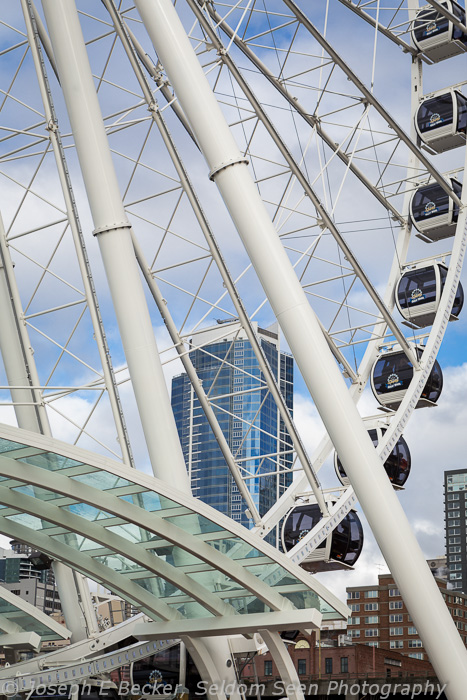 Sample image from the Canon 6D of the Seattle Great Wheel.

I’ve had my new Canon 6D for about a month now. Unfortunately, I haven’t had much chance to use it. I did do a portrait shoot a few days after receiving the camera, was able get out for half a day last Friday, and also carried it along on a day with friends on Saturday when we went to the Woodland Park Zoo. I’m not going go give a full review of the camera, there are many other blogs and websites that have already done that. In some of the reviews I’ve read, the 6D is getting bad marks for not having as many features as similarly priced cameras (the Nikon D600 in particular).

However, I am not the least bit sorry I upgraded to this camera (particularly when switching to Nikon is not a realistic option considering my investment in Canon lenses). Now, remembering that my opinion is biased by coming from a Canon 50D, I am really loving the quality of the photos coming out of the 6D. With the full-size sensor and the same processor as the 5DIII, the image quality is fantastic.

The two biggest issues I had with my old camera were noise and focusing. Considering noise, the 6D is exceeding my expectations. The noise level at ISO 3200 is quite low, producing high quality images. With my 50D, ISO 3200 produced images that I would never want to use them for any high-resolution purpose. I’ve read that the noise for the 6D is still low at ISO 6400, but I haven’t used a setting that high.

Focus is one of the issues the 6D gets downgraded on in online reviews. This is largely because the camera only has 11 focus points (instead of 39 in the D600, and 61 in the 5DIII). However, to me, thefocus ability of the 6D is a huge step over the 50D. With my 50D, I always had a lot of problems with the autofocus, particularly when used for portrait work. With the 6D, the focus is dead on every time. There may not be a lot of focus points, but those it does have work great. Further, the camera also focuses in very low light. Since I take a lot of night-time shots, I love this feature.

I also really like the built-in GPS. With images taken with my 50D,  I’ve tried to locate my images manually in the Lightroom Map module. No more; now the camera does it for me. Very sweet! The GPS feature does continue to use the battery when the camera is turned off, draining the battery faster. So I’m training myself to turn the GPS on and off. Seems, to me, like a small inconvenience for such a great feature.

The camera also has built in WiFi, and with an app from Canon, you can control the camera from your smartphone. Believe it or not, I don’t have a smartphone, so I haven’t tried this feature yet. However, I will likely be getting one soon and am looking forward to using it with the camera.

Another feature I haven’t heard much about in the reviews I’ve read, is the camera’s size. It is the smallest full-sized sensor camera available. It is considerably smaller than the 5DIII, and weighs about half a pound less. Considering how much my photo backpack weighs, I like this size and weight.

Overall, I’m very happy with the camera. I like its small size and lighter weight,  and the quality of the images are outstanding. If you are a Canon user and want to step up to a full-sized sensor, you should check out this camera. Sure it has some features missing that I’d like – such as more focus points and a second card slot, but considering the price difference between it and the 5DIII (the 6D is about $1500 less), especially when the 5DIII doesn’t have some of the features I want (such as GPS), I’m glad I got this camera.

The interior of Union Station in Seattle. The Canon 6D didn’t have much problem with the extreme range of contrast in this image. While I did shoot some HDR here as well, this single exposure (shot RAW and processed in Lightroom) is certainly acceptable. Images settings: 17- 40mm lens set at 29mm, f/8, 1/13 sec, ISO 200, +1 exposure bias

Pete, the silverback male of troop 1 at Woodland Park Zoo in Seattle. He didn’t look particularly happy to have me taking his picture! I would of had a hard time with this image in my old camera, but the Canon 6D worked great. The focus is right on in this low light situation and the noise at ISO 3200 is not bad at all. Image settings: 70-200mm lens at 165mm, f/2.8, 1/60 second, ISO 3200, no exposure bias, small crop