Photo Guide to the Bowl and Pitcher 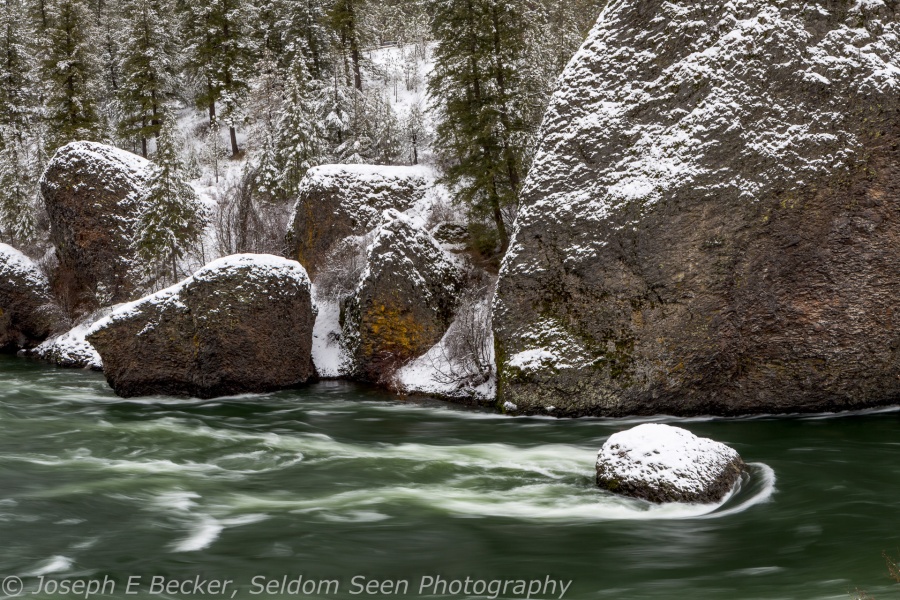 While in Spokane for my Dad’s funeral, I had some free time, so I went out to Riverside State Park to do some photography. It was therapeutic spending some time in nature, walking around in the snow, and shooting the river. Riverside State Park is a large park with several different units. I spent most my time at the Bowl and Pitcher, which is perhaps the most scenic place in the park.

The Bowl and Pitcher are contains large basalt rock formations surrounding a turbulent Spokane River. Supposedly, several of the rock formations look like a bowl and a pitcher. However, I’ve been to the Bowl and Pitcher dozens of times in my life (having grown up in Spokane), and I’m still not sure which ones are the namesake rocks. None of them look like a bowl and pitcher to me. I looked on-line to find how the formations gained their name. The only reference I found was to a geology class project from Spokane Community College which claim there is a small “cave” under the rocks that the river churns through and around that looks like a bowl and that one of  the formations further downstream looks like a pitcher. With this explanation, I think I can “see” the pitcher, but I’m still stumped on the bowl.

Regardless, this is a great location to do some photography if you have some free time in Spokane. Perhaps the best view of the formations and river are from an elevated viewpoint on top of one of the formations on the east side of the river. You can access the viewpoint from a small parking area along the right side of the access road to the Bowl and Pitcher area just after you turn off the main road through the park. Alternatively, you can hike up to the viewpoint from the day-use parking area along the river (a Washington State Parks Discover Pass is required for either spot).

About a mile downstream from the Bowl and Pitcher is the Devil’s Toe Nail, a smaller rock formation in the river which is also worth stopping at. You can reach this area by hiking down the hillside on the east side of the river from a small parking area along the main road, or by hiking along a trail which follows the west bank of the river from the suspension bridge.

Photography  in winter at the Bowl and Pitcher can be difficult because of the extreme contrast between the snow and the nearly black basaltic rock formations. I didn’t try any HDR here, but it may be worth attempting. The dark rocks will present a similar challenge in the summer when lit with direct sunlight.

The flow in the Spokane River drastically changes throughout the year making radically different shots available in the winter and spring versus the summer and fall. The flow in the river when I was there this month for about 16,500 cubic feet per second (cfs). Peak flows in spring can exceed 40,000 cfs, while typical flows in August and September fall below 1,500 cfs. 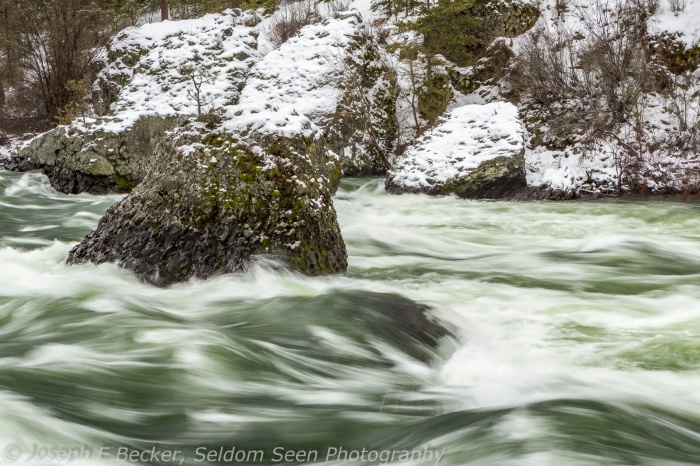 This is the Devil’s Toe Nail, about a mile downstream from the Bowl and Pitcher. 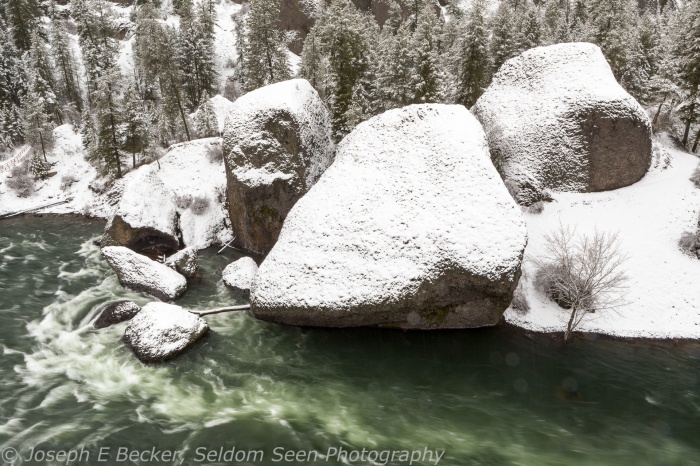 Here is part of the view from the viewpoint. Could the rocks here hold the bowl? 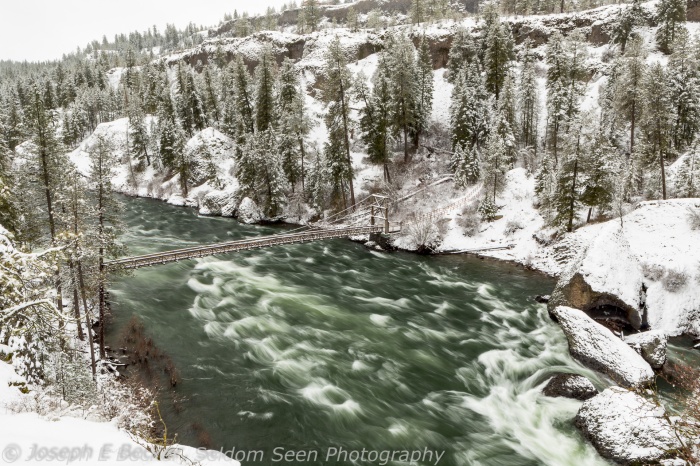 View of the suspension bridge from the viewpoint

Another view from the west side of the river. The big formation in the center of the photo is capped by the viewpoint. 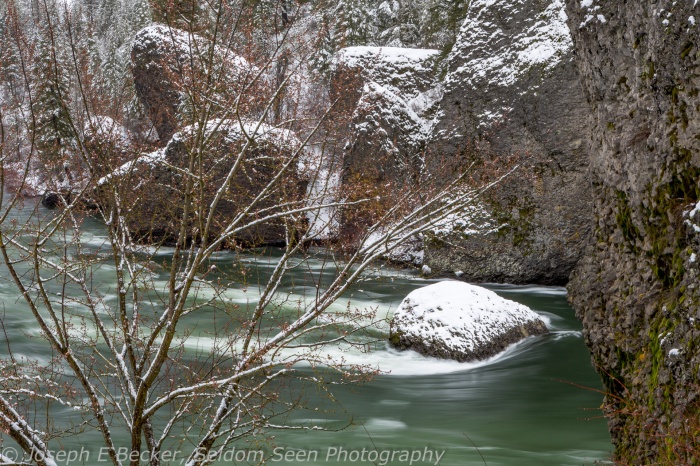 One more shot from the west side of the river. 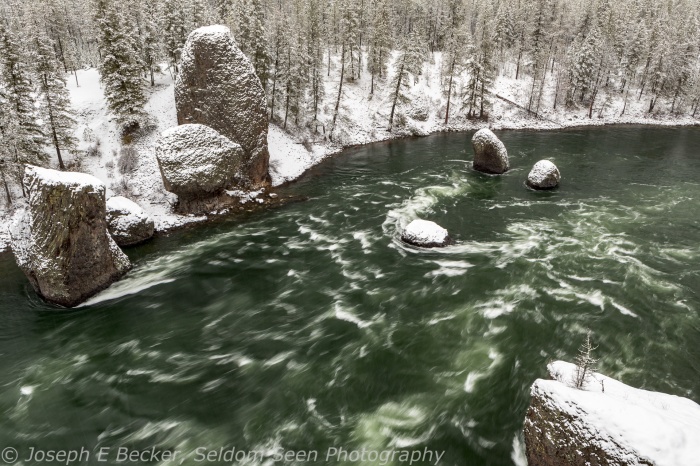 Perhaps one of these is the pitcher?

Today we buried my father. Ernest John Becker was an amazing, yet humble man. He was a leader in the Spokane community, serving on many civic, Gonzaga University, and church boards. He was the managing partner at the biggest accounting firm in the city. Yet, at least with his kids, he didn’t talk about these things. To us kids, he was just Dad.

Dad grew up in Colton, Washington, a small farming community near Pullman. Actually, he grew up on a farm several miles outside Colton. He was one of 14 children. The farm was at the base of Bald Butte, a rounded chunk of bedrock sticking several hundred feet above the rolling hills of the Palouse. Several years ago, I talked with Dad about his life, and he said that Bald Butte was his favorite place. It held great memories for him of growing up on the farm, and he still liked to visit the Palouse and Bald Butte when he got the chance.

He eventually left the farm, joining the Army and serving in the Korean War. He didn’t talk much about those days, at least to me or my siblings. After three years in the Army, he returned to Washington and attended Gonzaga University, earning a degree in accounting. About that time, he married my mother, and together they started their own large family. I am one of seven children; the oldest boy, third oldest overall.

Over the past week, all of us shared photos of Dad. I have all the old slides that Mom and Dad shot from the late 1950s through the 1980s. I went through several hundred, and scanned quite a few to share with my brothers and sisters. One brother made photo collages for the reception after the service; I made a slide show of Dad’s life. There were several shots of Dad proudly holding his first baby son back in 1959 and 60, and I couldn’t help but think today, that now I was carrying him as one of the pall bearers.

I suppose I got my love of photography from him. While growing up, whenever we took a trip, Dad had his camera out, taking photos of the family and the scenery. I don’t know when he got his first camera, I never had the chance to ask, but I did scan one photo of Dad as a young man, perhaps 20 years old, camera in hand. My mother also took a lot of photos, so perhaps I came to photography from both sides.

Dad also bestowed his love of nature on me (and my siblings). Every year he’d load up the station wagon and hitch up the tent trailer, and off the nine of us would go to explore the American west. I remember trips to Glacier National Park, the Oregon coast, Arches National Park, Yellowstone, the west coast of Vancouver Island, and southern California.

He loved to travel. A few years after my mother died, Dad met and fell in love with my stepmom, Anita. There  eight years ago, when Dad was 81 years old. Together they discovered the wonders of Europe and Hawaii during multiple trips. In between the trips, they enjoyed life in Spokane. It was wonderful to see him so happy in his later years.

I’m like him in so many ways – the photography, love of nature and travel, quiet by nature – and I must have been told 20 times today at the funeral that I look just like him. Which is good, I guess, since I think he was a handsome man. Perhaps you agree? The photo above is one I took about two years ago, at Bald Butte in fact. It was probably the last time he was there. The one below is his high-school portrait – then the year he left the farm and Bald Butte behind to make his way in the world.

He died about two weeks ago, and I still have a hard time believing he is gone. He was the very definition of a good man – humble, loyal, steadfast, smart, and generous. And while, perhaps, a little bit of him lives on in me, in my memories and my genes; I will miss him. Rest in peace Dad.