I’ve photographed in the Palouse in spring, summer and fall, but to finish up my soon-to-be release Palouse photography guide, I needed to photograph there in the winter. To be honest, I have shot in the Palouse in winter before, but not when there was snow. So all winter long, I’ve been waiting for snow to coat the Palouse hills (and for some free time for me to make the journey). When I did go last week, I found the Palouse is incredibly beautiful when covered by snow. 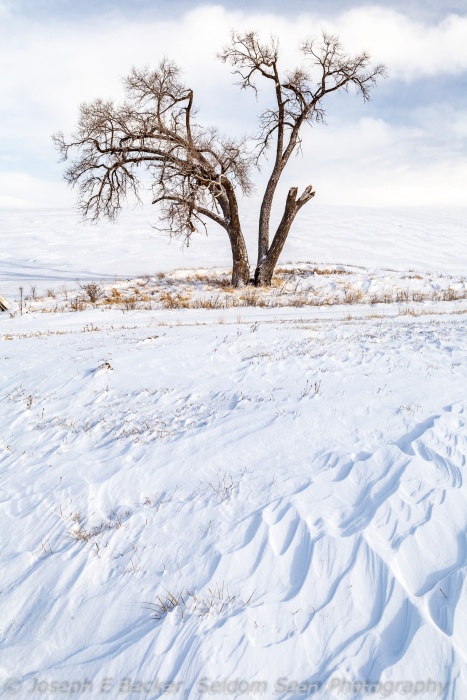 Winter in the Washington State has been very mild (that is up until about eight days ago), and snow has been rare in eastern Washington. Finally, several weeks ago, the weather forecasts were looking favorable, so I made plans to do a quick trip over. My plan was to drive over the evening of Thursday, February 8th, shoot on Friday and Saturday, then after a quick visit to my Step-mom in Spokane, drive back to Tacoma on Sunday. It was a good plan, except it didn’t account for the largest snow storm to hit the state in decades. The photography part of the trip went great (though I didn’t get to as many spots as I would have liked), but the driving home on Sunday part was not so good.

The snow coverage in the Palouse was uneven. Down near Uniontown, there was less snow (and in some places, almost none – though earlier this week, I’m sure this changed), while up near Tekoa, the snow cover was much thicker. My journeys on Friday were hampered at times by falling snow, which greatly cut visibility and made scenes look foggy. Saturday provided much better light, but brought its own special challenges – high winds and drifting snow.

Many of the back roads in the Palouse are “all-weather” gravel roads. I found many of these barely passable because of the drifting snow. In my mid-sized, all-wheel drive SUV, I plowed through many snow drifts as long as they weren’t too tall – it was fun. While this allowed me to get to some good shots, it later came back to haunt me. By mid-afternoon Saturday, the light was wonderful, but the wind had really picked up, and even the paved highways were being drifted over.

Throughout Friday and Saturday morning, I had visited spots I thought might look good with snow (as well as a couple new spots). My plan by mid-afternoon on Saturday was to go shoot the Lone Pine grain elevator then try to get up on Steptoe Butte. Lone Pine road was heavily drifted, but we made it in. The vantage point I wanted was a short distance from Lone Pine Road, on Chase Road (another all-season road). Tanya and I turned onto Chase Road and almost immediately stopped because the snow was so thick. But then, a tractor plowing the road crested the hill. It went by us and back up the hill. I figured we could now make it, with the road being plowed. I was wrong. We got about 100 meters or less up the road and got stuck. We were stuck for at least half an hour, even with the farmer, Donovan Chase, helping us out. He finally was able to get us out of there, and I didn’t even get the shot I was looking for (the 30+ mph wind was blowing snow straight at us from the direction of the grain elevator – the shot was not possible).

After freeing us from the snow, he asked us to check in at C&D’s Bar & Grill (which he is an owner) to let them know we made it out okay since the conditions on Lone Pine Road were sketchy. We made it out to Tekoa and stopped at C&D’s to have a drink. We decided it was probably best stop the photography for the day and head to Spokane (we probably couldn’t have gotten very far up Steptoe anyway). However, not a mile outside of town on the highway to Spokane, the road was restricted to one lane by snow drifts and that lane was blocked by a tow truck pulling a car out of a drift. Right then, a Department of Transportation truck appeared and told us the highway was closed. We eventually did make it to Spokane by heading east out of Tekoa into Idaho first before heading north. The normally 50-minute drive to Spokane took about 1.5 hours. On the drive, our car was running rough and making unusual noises.

A view of Steptoe Butte with the Palouse River in the foreground. By the way, I cheated on this shot. Steptoe and the foreground with sunlit at different times, so I composited two shots together here.

But we made it to Spokane and checked into our hotel. After dinner with my Step-mom, we decided our SUV should probably go to the auto shop before we drove back across the state to Tacoma. You know how many auto shops are open in Spokane on Sundays in winter? Maybe two. We still hoped to drive to Tacoma Sunday, so I got the car to the Firestone shop when it opened at 8 a.m. Sunday morning. However, with the storm, their power had been out all day Saturday, and they were very backed up. They’d get to my SUV when they could.

About 3 hours later, I got a call from Firestone. They had the car up on the lift and the mechanic saw something he had never seen before. Apparently, the total undercarriage of my SUV was coated with over 1 foot of ice. They said they’d need to thaw the car before determining what was wrong. Needless to say, we did not drive to Tacoma that day. Around 5 p.m. Firestone called back and said they had finally melted enough of the ice to check the car out. They thought their might be a problem with the transmission and suggested I take it to a transmission shop in the morning.

So Monday morning, I picked the car up at Firestone and drove it to the transmission shop. It took them a couple of hours to determine nothing was wrong with the transmission. Though they did call me into the shop and under the lift to show me ice still packed into the nooks and crannies under my car and asked where I had been driving. They thawed more ice and sent me on my way. We hit Interstate 90 toward Seattle at around 10:30 a.m.

All went fine until we were about half way up and over the Cascade Mountains on Snoqualmie Pass. It was around 5:30 p.m., was snowing heavily, and very dark with almost no visibility (I was glad I got the headlight fixed). Not surprisingly, the State Patrol closed the road. Unfortunately for us, they closed it about 10 cars in front of us. If we had left Spokane 5 minutes earlier, we could have got over the pass. Instead, we found a hotel room for the night in Cle Elum.

Tuesday morning, we packed up and learned that the pass was still closed and Interstate 90 was closed both ways. We decided to try for White Pass (good thing, Snoqulamie Pass didn’t open until a day later). He had to first take back road east to Ellensburgh because the freeway was closed. But once at Ellensburg, we got back on the freeway and drove east and south to Yakima. There we got on the US Highway 12 to White Pass. The pass was open, but conditions were not good. However, we finally made it over the Cascades. Unfortunately, the highway to Tacoma from Highway 12 was closed due to snow and downed trees, and we had to take the long way around. We finally got home around 5:30 p.m. – a full two days later than we had planned. It had snowed about 13 inches at our house and we needed to shovel the berm created by the snowplow in front of our house to park.

So, was all this worth it for some winter shots of the Palouse? You be the judge and let me know what you think of these shots. 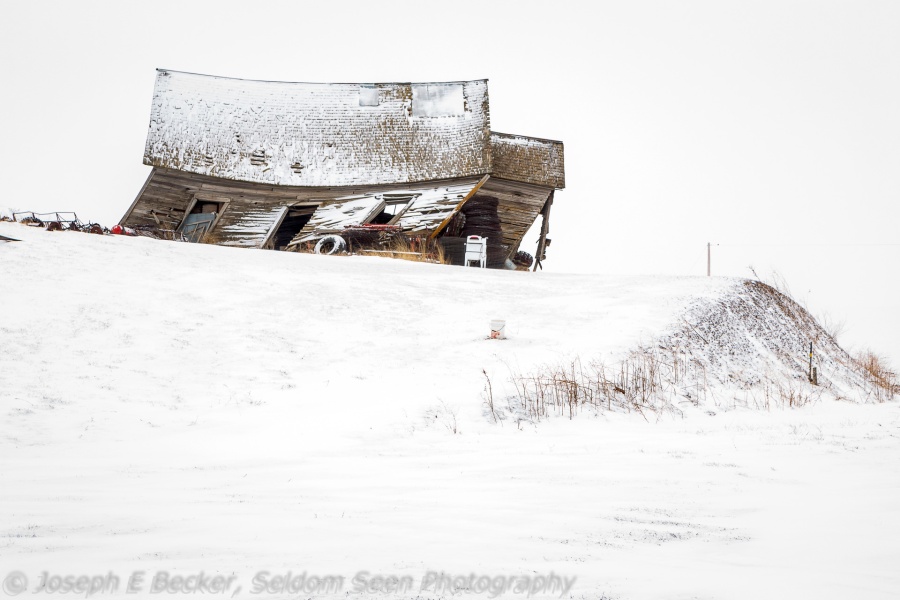 This is the old Skeen School near Kamiak Butte. It’s amazing how it is still standing. 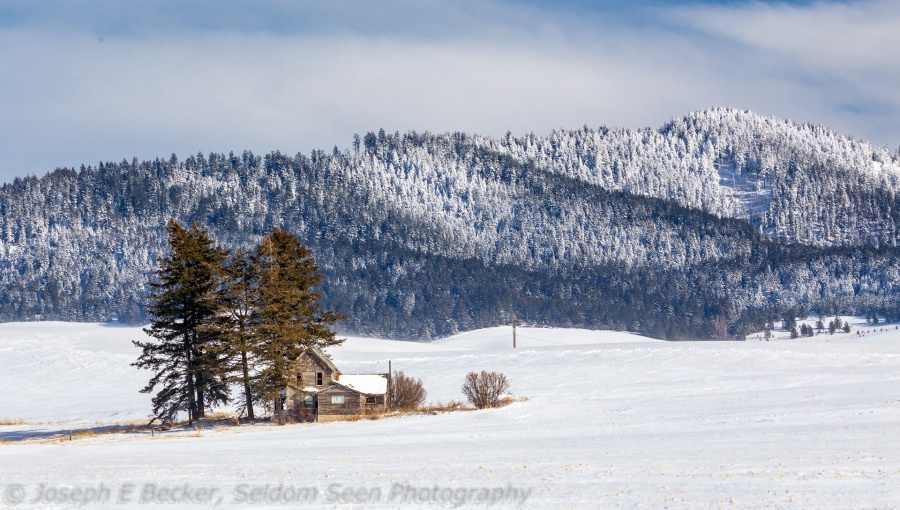 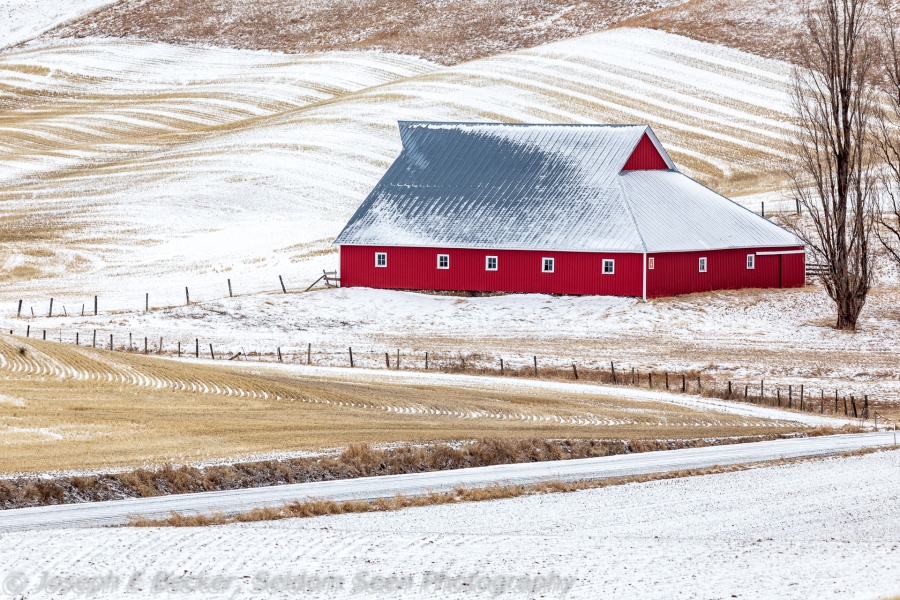 A red barn along Borgen Road in Idaho, east of Uniontown.

Two barns along Banner Road north of Pullman during a snowy period on Friday morning.

These horses didn’t seem to mind the blowing snow on Saturday morning. 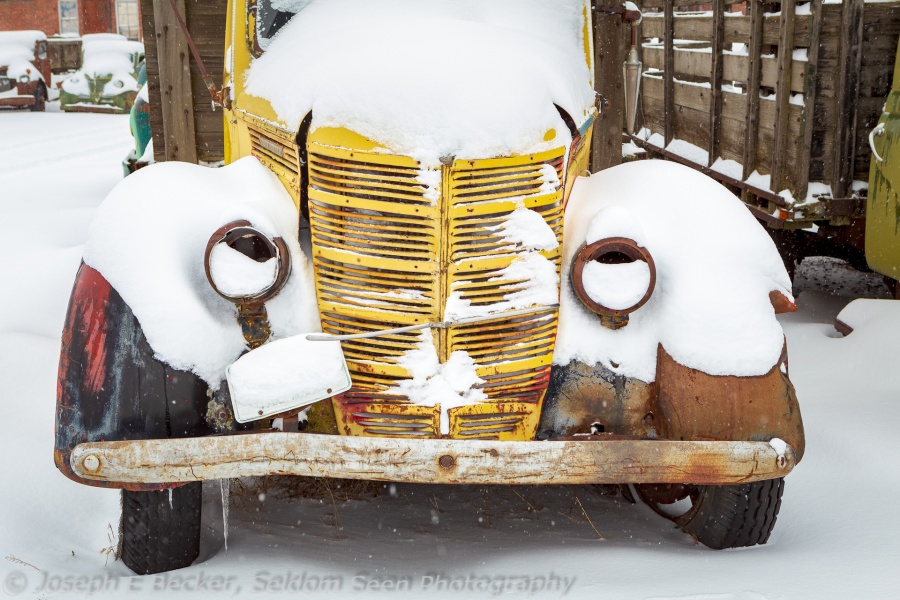 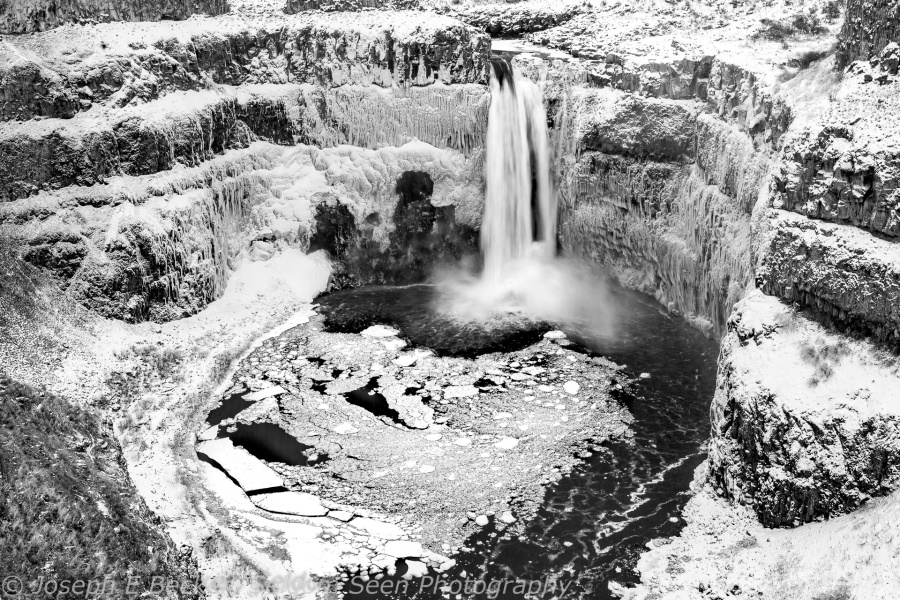 Palouse Falls on Friday afternoon. The water was a dirty brown color, as was much of the ice. Black and white to the rescue!