Tanya and I are currently enjoying a trip to Quebec and Vermont, both places neither of us have been before. We first spent four days in Montreal, staying in an apartment in Old Montreal just down the street from the Notre Dame Basilica. To tell the truth, I didn’t know Montreal had a Notre Dame until a month or so ago when preparing for this trip. The Basilica is stunning, almost impossible to describe in words. Luckily, I take photographs! Also, what is amazing besides the Basilica itself, is that the Notre Dame Basilica allows tripods! I had assumed not, but thought it didn’t hurt to ask, and was surprised with the yes. So, here I give you a quick shot of view looking up in the Basilica near the organ and choir loft. I’ll post more from our trip later. For now, enjoy this image of Basilique Notre-Dame de Montréal.

El Santuario de Chimayo is Catholic church and shrine in New Mexico about 30 miles north of Santa Fe. It is located in the town of Chimayo, along on the High Road to Taos.  While the high road has a number of other adobe churches worth photographing, Chimayo offers much more. Besides the main church, there is another smaller chapel near by, a trading post, and colorful grounds where the faithful pray and leave offerings. If in Santa Fe, it is well worth the drive to Chimayo to see the church and grounds.

If you do visit, you probably will not be alone. Sometimes called the “Lourdes of America,” Wikipedia claims Chimayo has 300,000 visitors per year and is the most important Catholic pilgrimage site in the United States. The main church, El Santuario, has a adobe-walled courtyard and twin bell towers topped with crosses. The nave is decorated with a large carved crucifix and various altarpieces, all from the 1800s. On the side of the nave is a separate prayer room/vestibule literally lined with hundreds discarded crutches from people believed to be healed from the “holy dirt” of the church. One wall of the prayer room, as well as many other walls elsewhere on the grounds, is covered with photographs of people also helped by the shire. The holy dirt is located  within a hole in the floor of a small room attached to the prayer room. When we visited, a woman was kneeling on the floor, scooping holy dirt into a Ziploc bag to take home.

The second church is the Chapel of Santa Niño de Atocha. The chapel was built in 1856, but fell into disrepair to be renovated by the Archdiocese of Santa Fe in the early 1990s as a children’s chapel. It is decorated with modern artwork, but still maintains its historic feel.

Unfortunately, photography within both the churches is prohibited. However, many wonderful photographs can be captured by walking around the grounds and in the nearby portions of the town as you can see by the examples I’ve posted below.

Certain parts of the grounds are full of crosses and other items left by pilgrims and visitors to the site.

The door to the Santo Nino Chapel 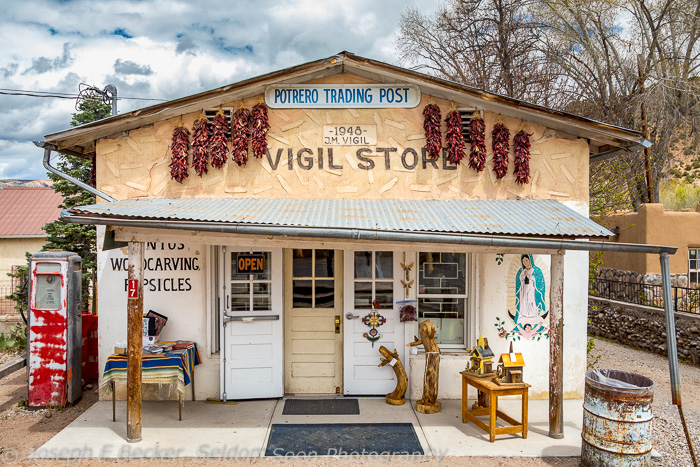 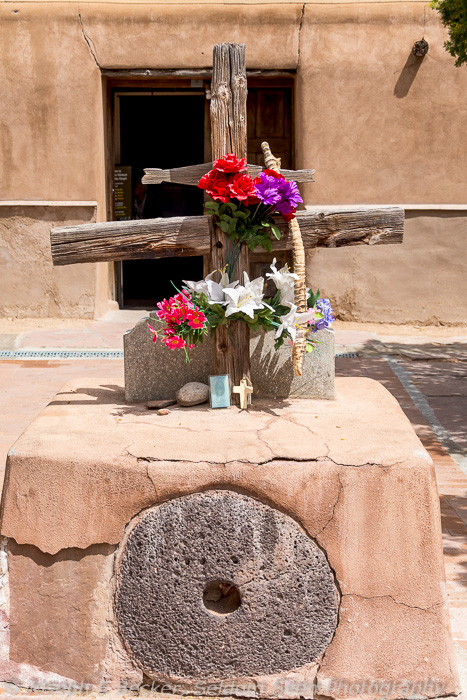 Cross in the courtyard of the Santuario de Chimayo

Shire to the Virgin Mary, covered with rosaries and candles

Churches in Black and White 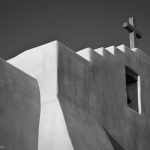 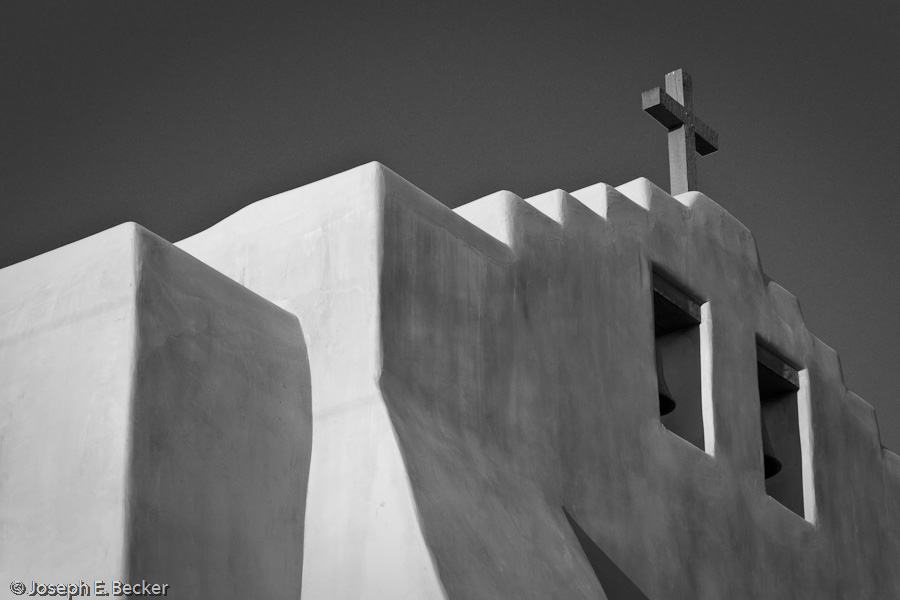 I’m continuing my series of posts about my trip to the Southwest with a look at New Mexican churches – adobe churches in particular. I’ve always enjoyed photographing churches, at least those with classic architectural styles. And in New Mexico, there is nothing more classical than adobe.

If you are interested in seeing churches such as these, I highly recommend traveling the high road between Santa Fé and Taos. There are a number of highly photogenic churches along this route, many described in Laurent Martes‘ excellent book on photographing the natural landmarks of Colorado and New Mexico (okay, I know churches aren’t natural landmarks, but the book is titled Photographing the Southwest Volume 3 – a Guide to the Natural Landmarks of Colorado & New Mexico and does mostly cover natural subjects). By traveling this road, you’re bound to come up with at least one or two decent images – there is always at least one church with good light upon it.

My biggest question concerning the adobe churches I photographed was how best to portray them – in color or in black and white?  I leave it to you to decide, providing most images in this post with both versions.

I think they look good both ways, but if forced to make a choice, I’d generally chose the black and white versions. There are exceptions, of course; ever photograph is different.  In the examples given here, I do like the black and white images better; they generally do a better job of conveying what I want the to convey. I love the look of a cross on a church really standing out – and that works well with these images except for the image of the San Juan de Los Lagos steeple and black cross, there the color version portrays my vision better. I also love the high contrast of the black and white images. However, I’d like to hear your comments – color or black and white? 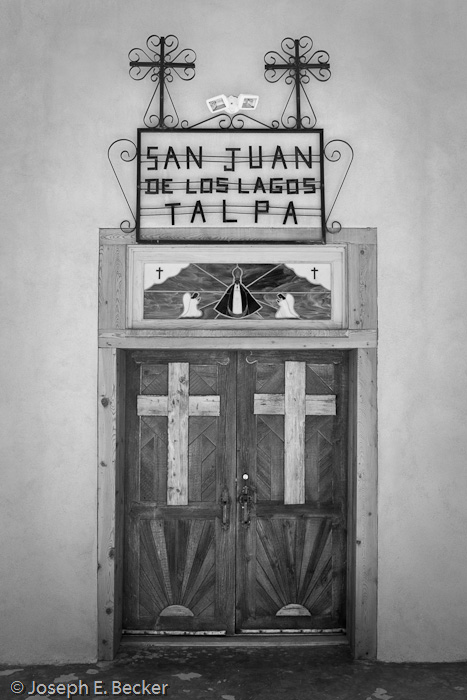 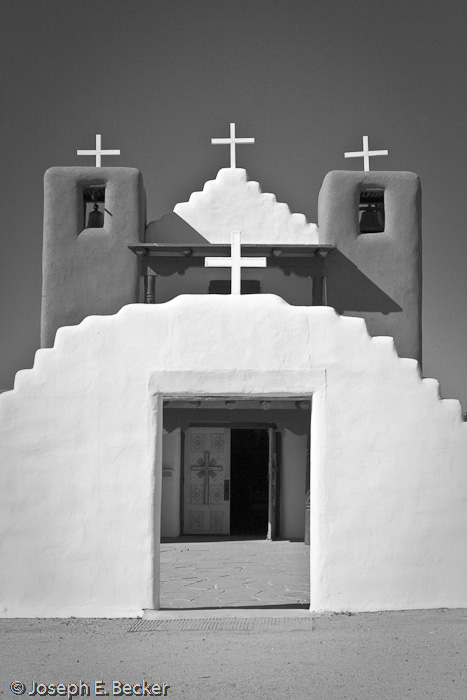 On the Road in Santa Fe 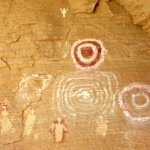 Sneffels Range, part of the San Juan Mountain of Colorado, in the late afternoon

Now, after a week on the road and away from computers, Tanya and I are at a B&B in Santa Fe, New Mexico. We’ve had a great trip so far, both in terms of places visited and having good weather. I don’t think I’ve ever had such a good weather on a road trip – a few rain drops on the windshield, but otherwise great weather, a mix of totally blue skies (boring photography wise) with scattered clouds (nice photographically).

I’ve included a few shots from the first half of the trip here. Please forgive any issues with these images, they have not been through my normal workflow. Instead of going through Adobe Lightroom and Photoshop, they have been somewhat randomly selected and minimally processed with Picassa. I’m working on a very slow laptop, without much memory. This makes it very hard to do editing of the RAW files produced by my camera, and optimizing with Picassa is slow (not to mention not having the capabilities of Lightroom and Photoshop). Regardless, these few images can give you an idea of what we’ve seen so far.

The trip started with a long drive from Tacoma to Twin Falls, Idaho – about 650 miles. The next day we drove to Dinosaur National Monument, roughly 400 miles. This may be the best, closest exposure of sandstone slickrock to Washington State. Two nights there, including a side trip to Fantasy Canyon – a small, but must-visit place for nature photographers.

We then drove south through western Colorado to spend a night with my now retired geology professor from Texas A&M University (where I received a Masters in geology). He is retired and maintaining an orchard and vineyard in Palisade, Colorado. Much wine was drunk when staying with him and his wife!

Leaving Palisade, we drove over the Grand Mesa, made a short stop at Black Canyon of the Gunnison National Park, and drove on to Ouray, Colorado. We spent two nights there in the San Juan Mountains. I was hoping for good fall color with the aspen trees, and was partially rewarded. Some had turned already and others were still green. Regardless, the views were fantastic.

Then it was on to Taos, New Mexico, where we spent a night camping on the Rio Grande and visited Taos Pueblo. We took the high road into Santa Fe from there and have been enjoying the city for two nights now.

I hope you enjoy these few photos from the first half of the trip. I’ll post more once I get back home. The top one is of the Sneffels Range in Colorado. It is part of the San Juan Mountains. This is the view from the north, along West Dallas Creek Road. I was hoping for shots from this area with yellow aspens, but they had not turned yet on the north side of the range like they had further south.

The next shot is of a pictograph (pictographs are painted, petroglyphs are carved) call Sun Dagger. It is located in northwestern Colorado. Reportedly it was used by the Fremont People as a sundial.

The third shot is of Split Mountain and the Green River at Dinosaur National Monument in Utah. This scene, taken shortly after sunrise, is about 1/4 mile up the river from our campground.

The final shot is of the San Francisco de Asis church in Ranchos de Taos, a short distance south of Taos, New Mexico. 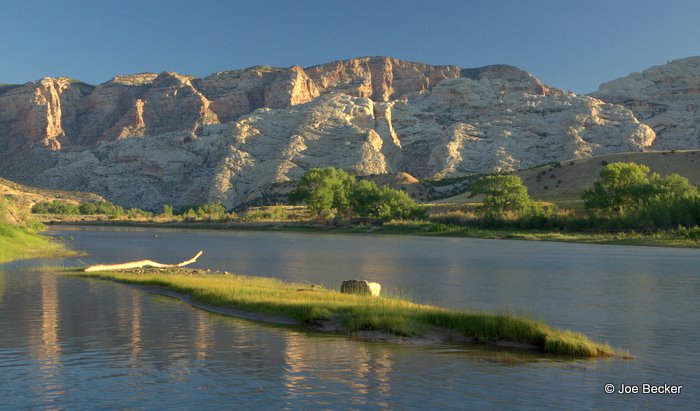