Western Washington has had nice summer weather most of July. Most evenings, there have been few if any clouds, which of course makes for very boring sunset shots. However, when the weather is like this, the hour after sunset brings gorgeous light. Even as it gets too dark for humans to see color well, there are wonderful colors out there to be recorded by your camera.

The period after the sunset (and before the sunrise) is called the blue hour.  During the blue hour, sometimes the light is blue, as a result of the blue sky, but other times it is wonderfully warm. This warm light has been referred to as salmon light by the guys over at Photo Cascadia. Whether blue or salmon light, these cloudless evenings can make for good photography. For some reason, I’ve found better luck with the blue hour after sunset rather than before sunrise, but maybe that’s because it’s so hard for me to get out of bed in the morning (especially when the sun rises before 6 a.m., like it is doing now).

I’ve found a online calculator  (by JetKo Photo) for determining when the blue hour will occur. However, I’m not sure one is really needed. All you need to know is that after the sun sets, keep the camera out and keep shooting away, even as it gets quite dark. All you need is a tripod and a camera that allows for long exposures. Many DSLRs, in the auto exposure modes, will only allow shutter speeds up to 30 seconds long. When hunting blue hour shots, be prepared to go to manual mode and use the the blub setting on the camera. (Don’t make the same mistake I did recently when first using my newest camera in the blue hour – learn how to set it to blub before setting out).

So after sunset, don’t get blue and put your camera away. Keep that camera out and capture the blue hour. 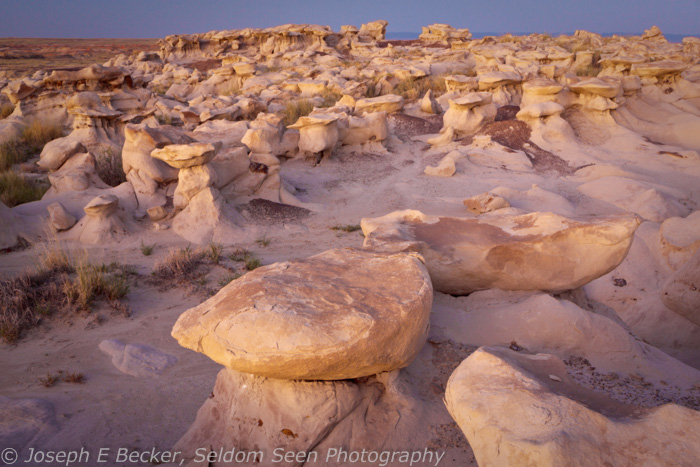 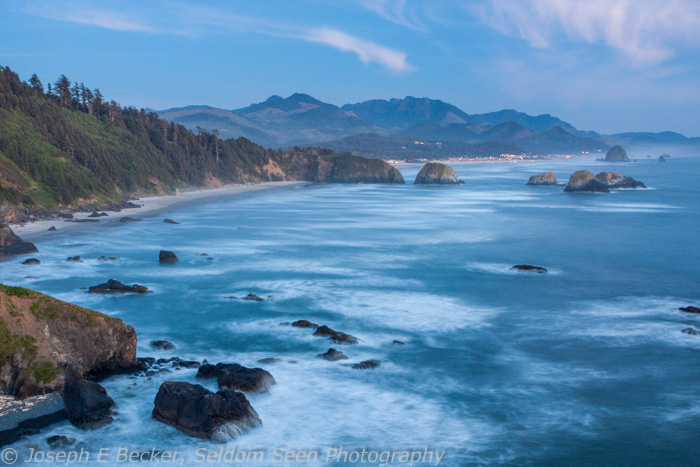 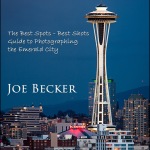 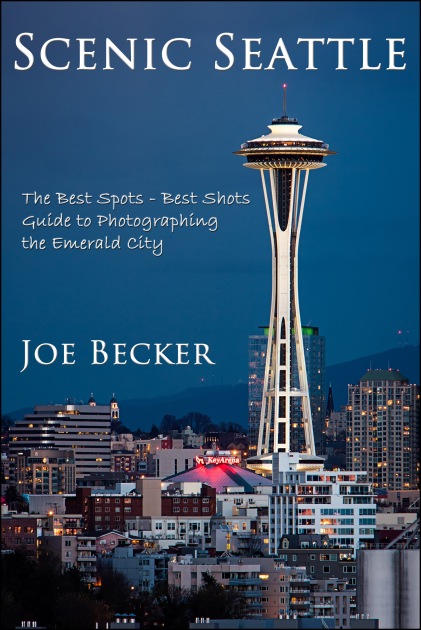 I’d like to announce the launch of my new ebook, Scenic Seattle The Best Spots – Best Shots Guide to Photographing the  Emerald City. The book started a personal project on travel photography in Seattle (as described in this earlier post) early last year. The project is now finished and Scenic Seattle is the result.

Scenic Seattle is a photographic guidebook designed to help photographers and others easily find all the special Seattle views. The book contains descriptions and directions to over 80 places to photograph in the city and provides specific advice on how to capture the best shots. Areas covered include Pike Place Market, Seattle Center, the waterfront, Chinatown, West Seattle, and many more. It has over 60 example images, as well as maps and directions to the image locations. The book is currently available on Amazon and Smashwords. Just today it was accepted into the Smashwords Premium Catalog, which means it will also soon be available at the iBookstore, Kobo, Barnes & Noble, and Sony. It is also available directly from me (if you order from me, I don’t have to pay the commission, which ranges from about 18 to 60% depending on the retailer; so if you want a copy, please send me an email).

If you are a regular follower of my blog, you’ve already seen most the images from the book as I’ve posted them over the past year. I’ve put a few more in this current post that I don’t think I’ve blogged before. With the book, in addition to the photos, you get directions where to go to take these photos and advice on how to take them. If you’ve ever wanted to know more about how I go about taking my images, or if you have an interest in visiting Seattle, this book is for you. Previews of the book are available at both Amazon and Smashwords.

View of Seattle from Seacrest Park

Museum of History and Industry 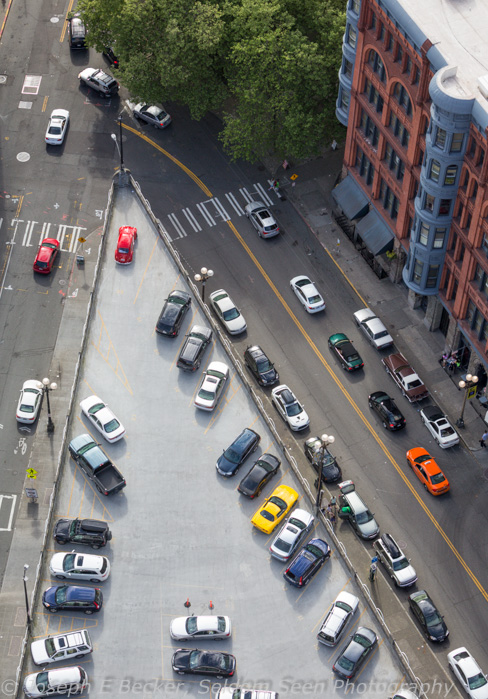 View looking down from the Smith Tower toward Pioneer Square 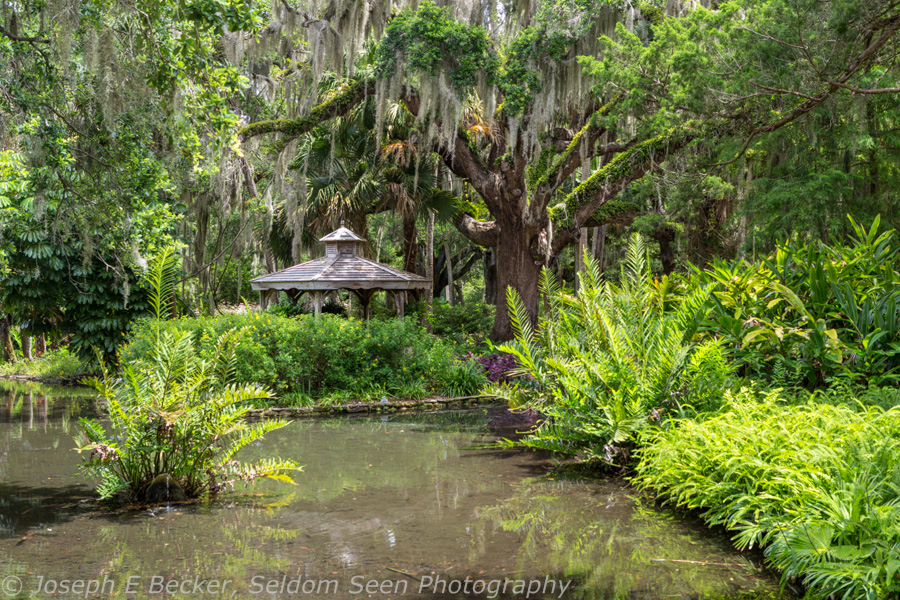 While Tanya was at her conference, I decided to drive up to St. Augustine for a day at the recommendation of my friend Mike Krautkramer. St. Augustine is the oldest continuously inhabited European settlement in the United States, founded in 1565. Both Tanya and I love visiting historical places, so it sounded like a great place to visit, and it was.

When selecting on a route up from Orlando, I decided to stop at Washington Oaks Garden State Park and Fort Matanzas National Monument on the way up. I drove through a huge thunderstorm on the way up, and my visit to Washington Oaks was under the constant threat of rain from the storm passing just to the south. But I stayed largely dry and the storm made for a dark, dramatic sky. The garden was nice, but I imagine it has more blooming earlier in the year. I was most impressed by the large oaks draped with Spanish moss – so foreign and tropical looking compared to our trees up here in the Pacific Northwest. The state park also has a nice Atlantic beach with one of the largest outcrops of coquina rock on the east coast. While the outcroppings are very small compared to most bedrock outcrops on the west coast, the rocks themselves were quite interesting to my geologist half. My photographic half also enjoyed making some images of them. I also took the opportunity to stick my west coast feet in the Atlantic Ocean – though with the threat of lighting, I though swimming was not a good idea. 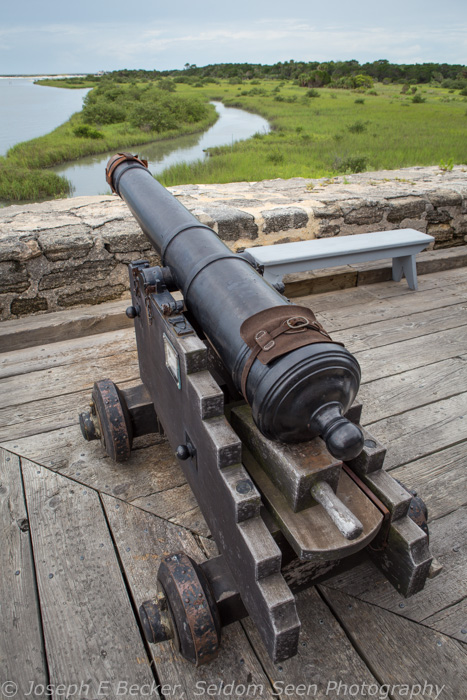 From Washington Oaks, it was northward several miles to Fort Matanzas. I knew little about it, other than it was a national monument. As it turned out, the fort is on an island, accessible only from a small passenger ferry from the visitor center. I arrived at the park right at 1:30 p.m. and immediately noted that the next ferry to the fort was leaving at 1:30 and the one after that at 2:30. If I missed the boat, I wasn’t sure I had time to wait around for the next one. I parked, and rushed to the visitor center to get a  pass for the ferry. I asked if I was too late, and the ranger gave me a 1:30 pass and said to hurry. I rushed out and as I approached the dock, there was a crowd waiting to board. The ranger there was asking if anyone else had a 1:30 pass, and still some distance away, I raised my pass and waved. He separated the crowd to let me through and onto the ferry. I’m not sure why none of the people waiting didn’t have the 1:30 passes, but I was grateful. They did let a few people with later passes on after I boarded, then off we sailed across the Matanzas River to the fort.

The first thing you notice about the “fort” is that it is small. In fact, on the ride over, the ranger said that many people ask where the rest of the fort is. He said it isn’t truly a fort, but just a fortified outpost. The entire fort is only 50 feet on each side and only 30 feet tall. It was built by the Spanish to protect the back way into St. Augustine. Apparently it was an effective defense. The guns were fired once against the English in 1742, and no one challenged the guns again. Eventually the British took over the fort via a treaty, then later it went back to Spain, and eventually to the United States in 1819. By that time, not having been kept up, the fort was in bad shape, and the United States never used it militarily. Today, the fort has been preserved and has become a haven for wildlife as well as historic site. While there, I was lucky to see dolphins, a manatee, and even a large alligator (apparently very rare in the salt water).

After about 45 minutes at the fort, the boat sailed back, and I drove north on Highway A1A to St. Augustine, arriving over the bridge of the lions. After a leisurely late lunch at an Irish pub on the waterfront, I visited Castillo de San Marcos National Monument. Unlike Fort Mantanzas, the Castillo de San Marcos is a true stone fortress. It is the oldest masonry fort in the United States; construction on the fort started in 1672. Its mission was to protect the City of St Augustine, which it did for many years. It was used by the military for 251 continuous years, until it became a national monument in 1924. Like Fort Mantanzas, it was built by the Spanish and also used by the British and the United States. However, not all its history is noble; when used by the US military, it largely served as prison for Native Americans. The site is full of old cannons, views of the water, and staff dressed in colonial-era clothing – all stuff any travel photographer love.

After touring the Castillo, I wandered around the old section of the city, stopping to photograph the lions at the bridge, a tall ship at the docks, the local cathedral, and several other old buildings. I easily could have spent several days in St. Augustine, there was much to see and photograph, but time was short and I had to get back to Orlando to have a late dinner with Tanya. Whenever I get back to Florida, a repeat visit to St. Augustine will certainly be on my list. 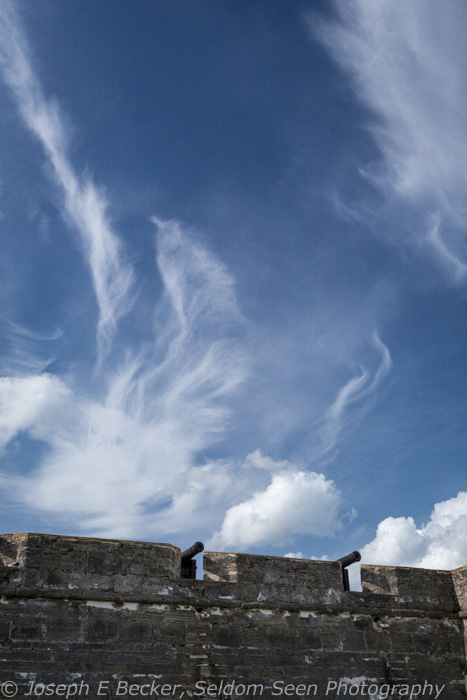 One of the lions at the Bridge of Lions

Last weekend Tanya presented a seminar at a chaplains’ conference in Orlando, Florida. So we made a quick flight down (well not so quick, it basically takes a full day to fly from Seattle to Orlando). Though we stayed at the Hilton at Disney World, I had no desire to visit any theme parks. Instead, Tanya and I drove out to the Orlando Wetlands Park.

The Orlando Wetlands Park was of particular interest to me because of my day job. The wetlands there are man-made using reclaimed water (that is, water from a waste-water treatment plant). Photographically, it’s a great location as well.

The place is amazing and well worth a visit. First, compared to the artificial environment of Disney World, filled with people and mouse ears, the Orlando Wetlands Park is a natural refuge. In the two hours we were there, we only saw one other person, but we saw plenty of wildlife – in particular birds and alligators, but also deer and a raccoon. Secondly, it is easily accessible, with wide trails on berms above the wetlands, making viewing the wildlife easy. We also lucked out in that the rain and thunderstorms rolling through the area left us alone while there.

If you are ever in the Orlando area and want to get away from the crowds, I recommend Orlando Wetlands Park. It’s free and open daily from dawn to dusk. 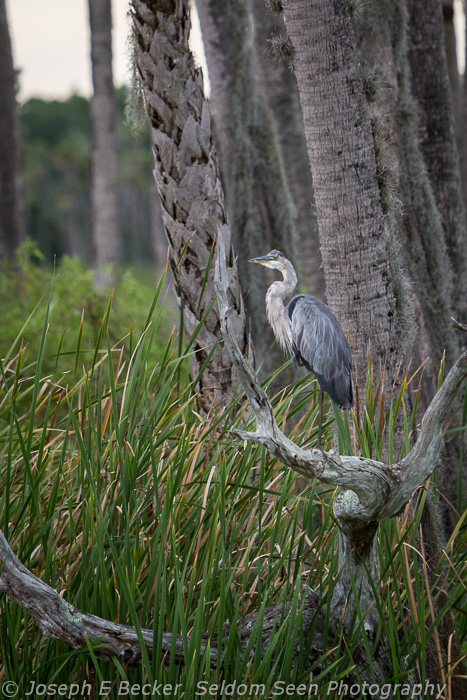 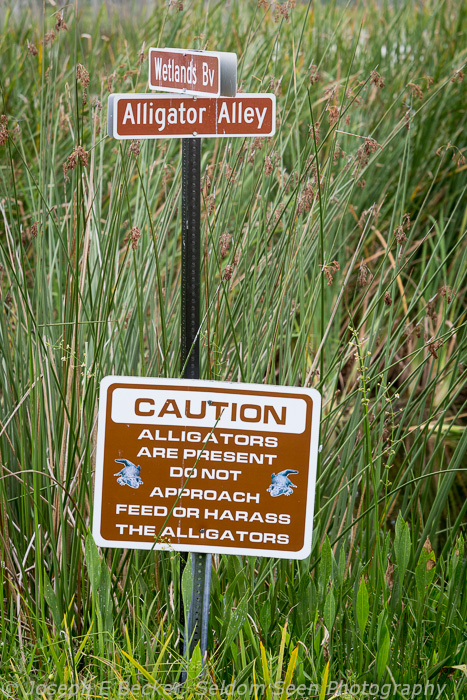 Caution – gators are about!