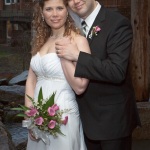 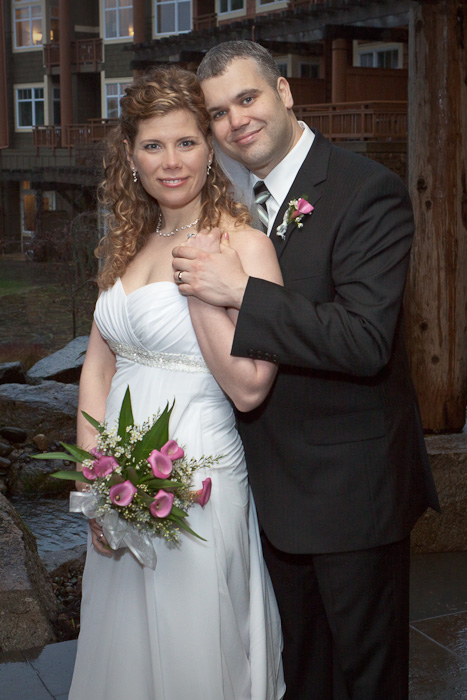 I shot a wedding last weekend. It was an exposure nightmare. The wedding was held at Alderbrook Resort out on Hood Canal in a small meeting room on the front side of the building. A nice enough setting, but one definitely not made for wedding photographers. The room had a fire-place set between several large windows. The bride, groom, and minister stood in front of the fireplace. The curtains were pulled shut on the windows, which was fine because any views out those windows would have been totally blown out. However, with the curtains shut, the room was dark – the lighting provided a nice mood, but not much else. Obviously I had to use a flash.

I wanted to preserve some room detail with the ambient room light, not light up everything with the flash (while simultaneously blowing the bride’s dress out into an overexposed white blob). This called for using a slow enough shutter speed, coupled with a wide aperture, to allow for some of the ambient light to show. I ended up using shutter speeds from 1/30th to 1/50th of a second, with an aperture of f/4 to f/5.6 (yes, I could have opened up the lens a bit more, but I was trying to keep a little depth of field). After the ceremony, we took portrait shots around the hotel. The lighting was not much better in most locations. Again, I wanted to save some ambient light in the background – long shutter speeds were needed.

Now there is a standard rule of thumb in photography that says while hand holding a camera, you shouldn’t have a shutter speed slower than the reciprocal of the focal length of the lens. Here’s an example for the math impaired – say you are using a lens with a focal length of 100 mm, than your shutter speed should be no less than 1/100 of a second. However, I must be a pretty shaky guy, I find things tend to get a bit blurry whenever I go below 1/60 of a second, even with small focal lengths. 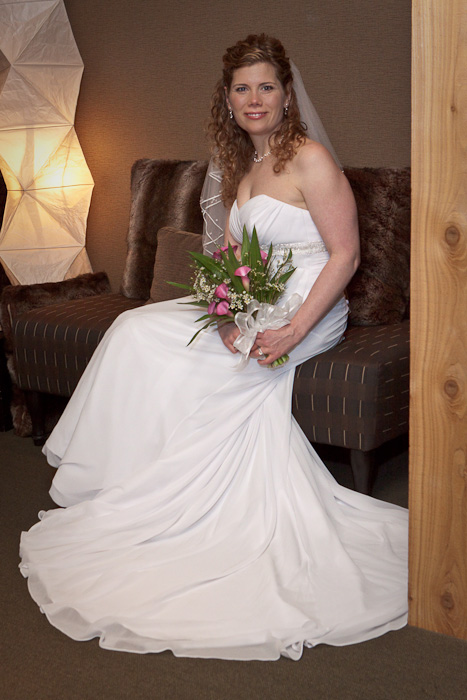 So, at those low speeds, how does a shaky cameraman like me keep the subjects from blurring? The flash does it – freezes everything in its path. Not just camera shake, but moving subjects as well. Electronic camera flash units fire at about 1/1000 of a second. A burst of light so fast it freezes even my worst camera shake – not to mention a nervous bride (not that she was nervous in this case, but you get the idea).  So this quick blast of light from you flash unit allows for longer shutter speeds to let in more ambient light. The technique is called “dragging the shutter” (which I think sounds cool) or slow shutter sync (which does not). When using this technique, you probably want to set the camera to rear- or second-curtain synchronization. (What is that you ask – that my friend is the subject of another blog; stay tuned!)

So I was dragging the shutter all day long, all over that hotel; and I was happy with the results. Hopefully the bride will be too.

Fun in the Dark 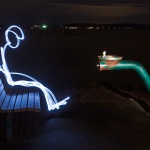 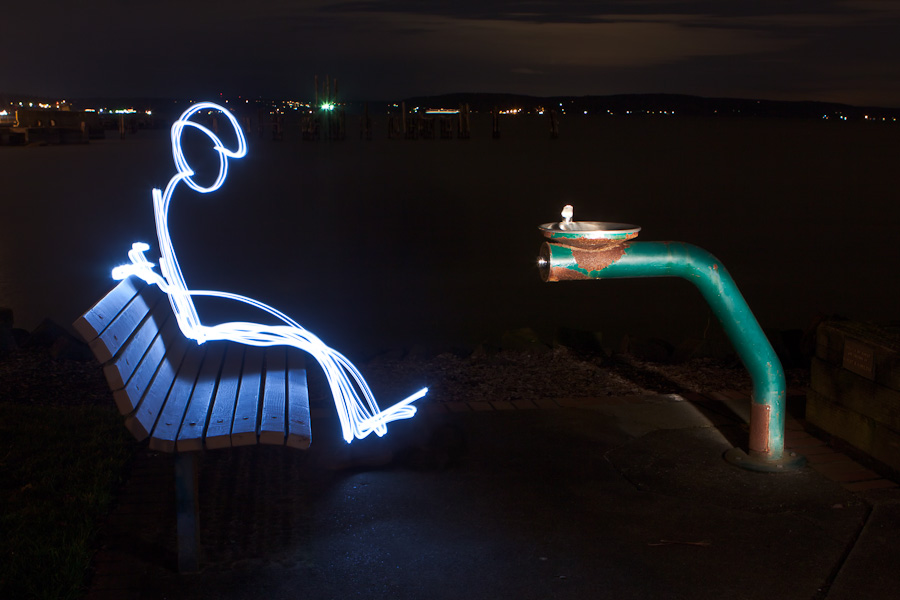 Wait, you say, what is light painting? Light painting is a photographic technique where your make exposures by moving a light source to light select objects, or select portions of the photographic frame (you don’t have to paint an object). It is typically done in the dark.  You can use any light source:  flashlights, camera flash units, even cell phones – anything that makes light.

Last week, at our regular, monthly Mountaineers photography meeting, we walked down from the Tacoma clubhouse to Ruston Way. For those unfamiliar with Tacoma, Ruston Way is along the Commencement Bay waterf 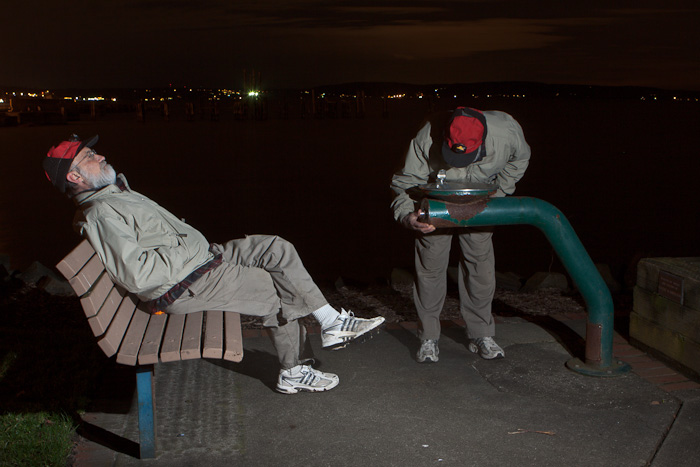 In the featured image above, I used a book light, which had two LED bulbs, to draw the “person” sitting on the park bench then used a regular flashlight to light up the drinking fountain. The exposure lasted for 63 seconds at f/8 and ISO 100.

Sometimes it is fun to use a model in light painting. You can move the same person to multiple positions in the same photo. The second image shows my friend Gary Peniston resting on the park bench and drinking from the drinking fountain at the same time! I had Gary first sit on the bench, then lit him with a single flash from an off-camera strobe. Then he moved to the drinking fountain, and I used the flash again. The whole exposure was for 36 seconds at f/8 and ISO 100. 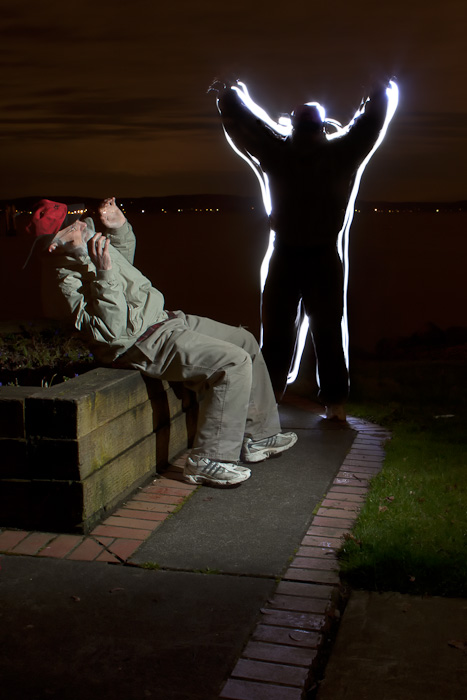 The third image is Gary again (Gary earned the honor of being everyone’s model by having the battery run out on his camera and not having a spare with him). In this image, which could appropriately be called “Afraid of his own Shadow,” I first had Gary stand with outstretched arms while I lit him from behind with a small LED flashlight, circling the flashlight around his perimeter. Then I had him move and sit down and act scared, while I lit him with the off-camera flash. The whole exposure was 75 seconds, again at f/8 and ISO 100.

The final three images show more traditional “painting.” In these three, I used a flashlight to light selected objects in the frame – in one case a tree, in other a cement wall and pilings, and in the last one a fish painted on a building wall. In the tree photo, I exposed the image for 77 seconds at f/8; in the cement wall and pilings (with Browns Point in the background)image, I used an  exposure of  66 seconds at f/10; and the building with fish image was exposed for 29 seconds at f/10. All used ISO 100. On the fish building photo, the lit window showing the inside of the building was totally blown out by that exposure, so I took a second 5 second exposure and superimposed the window from the second shot onto the first.

Of course, a tripod is important for doing these kind of images. Also, digital noise is a problem, which is why I selected ISO 100, which is less noisy than higher ISOs. Plus, using a low ISO allows for longer exposures, which are needed as you move in and out of the picture with your light sources.
Our little light painting outing was great fun. I’ll definitely be doing this again in the future, not waiting 15 years this time. 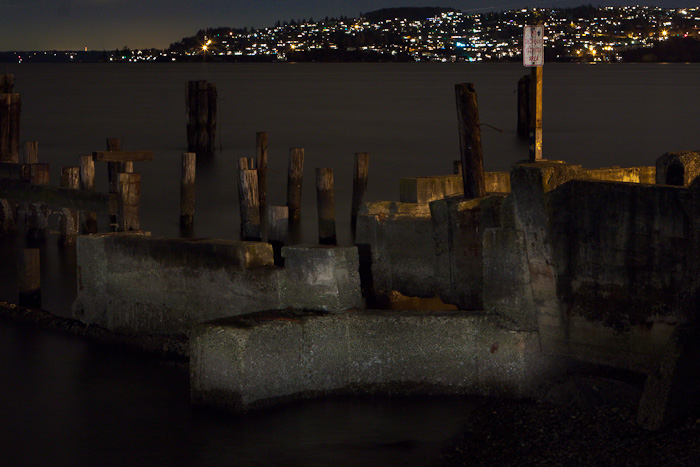 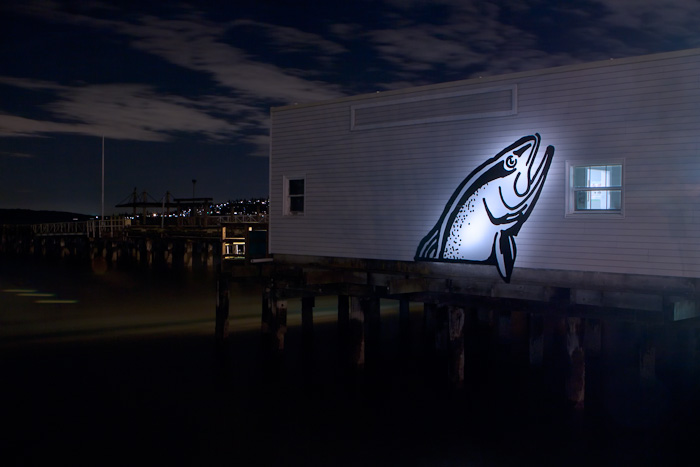 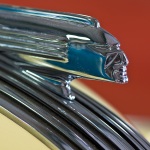 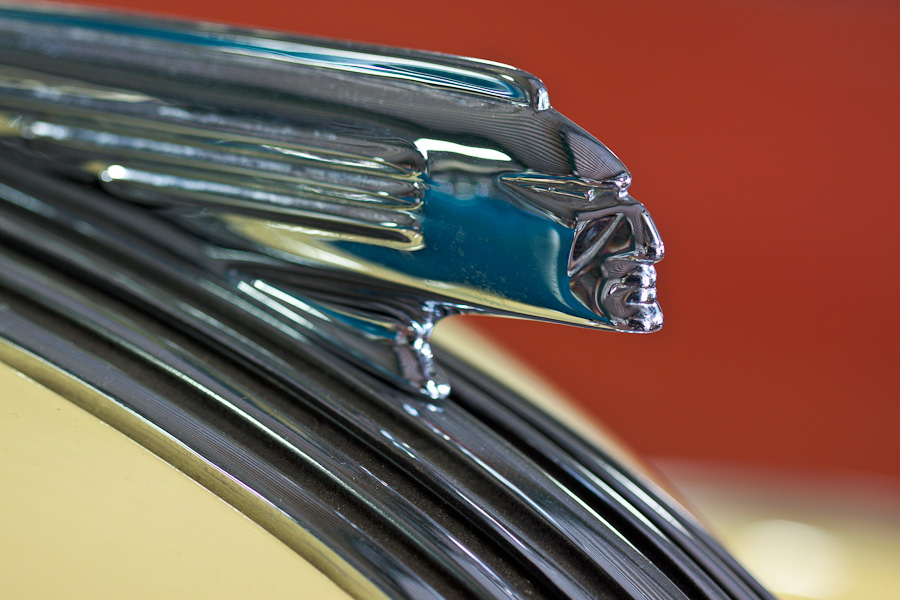 Today I visited the LeMay Car Museum – officially known as the LeMay –AMERICA’S CAR MUSEUM® with a small photo group from the Tacoma Mountaineers. Though I’m not sure if I actually visited the museum or not, because according to the guide, the LeMay car collection I visited and the new museum being built next to the Tacoma Dome are not the same organization due to some sort of falling out. Regardless, the LeMay car collection is amazing, and I don’t even like cars that much! 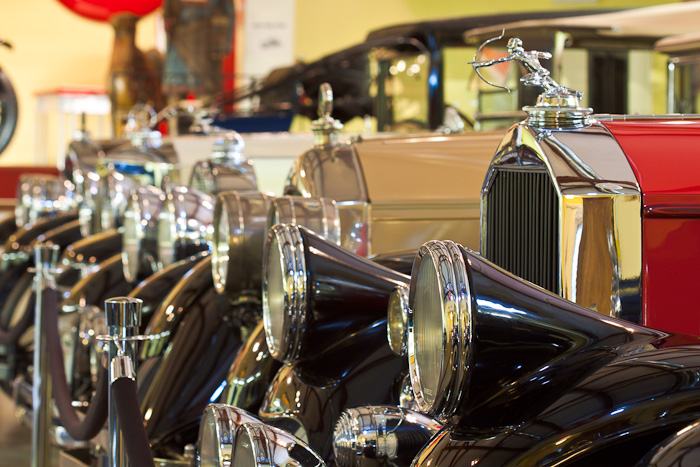 We spent over four hours photographing cars (the typical tour takes about 2 hours, but it is up to you, as each group gets their own tour guide). I shot way too many images, it is going to take me a long time to edit these, but I wanted to blog about it and show a few shots. The car collection is housed on the old grounds of the Marymount Academy – a former Catholic school for boys. Harold LeMay was the garbage man for the nuns that ran the place, and after the school closed its doors and the nuns couldn’t keep the place up, LeMay bought it. The collection has thousands of cars, though most are not on display. Don’t despair though, there are more cars there on display than you can look at in a day, or even a weekend.

I found myself mainly photographing details of cars rather than shots encompassing whole cars. One reason – the cars are stacked in there bumper to bumper, and it is nearly impossible to get a photo of a single car without a lot of clutter in the way. Shooting a lot of detail shots, I found my macro lens came in very handy. While the macro lens was nice to have, my tripod was essential to photographing there. 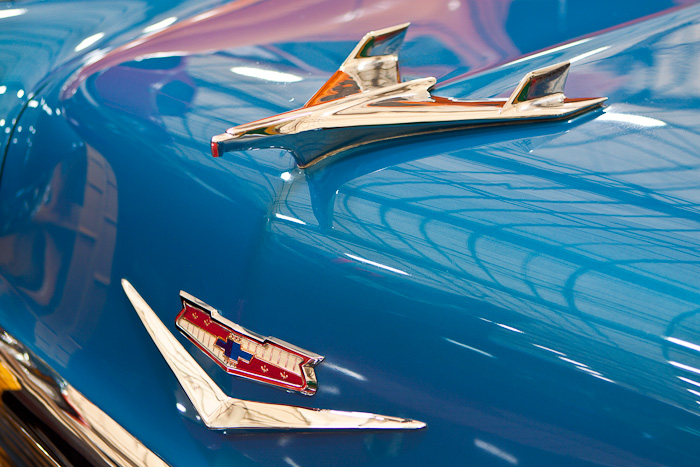 The collection is mostly indoors, though not all the buildings are heated. So, it was fairly dark (especially on a winter’s day), so without using a flash, either a tripod or a high ISO setting is required. I’m not a fan of high ISO noise, so a tripod was necessary. I also shot in RAW format. The lighting conditions were odd, mostly a mix of daylight and fluorescent.  Shooting RAW will allow me to adjust colors when I process the images. I hope you enjoy the few sample images I’ve included here. The upper photo is the hood ornament from a 1939 Pontiac DeLuxe Eight Convertible. The center photo is from, what I call, the “expensive car room”, which includes a Tucker worth over $1,000,000. The last image is the front end of a 1956 Chevrolet Bel Air Convertible.