A Winter’s Day in Seattle

Winter officially started here in the northern hemisphere a week ago yesterday. Winter in western Washington is typically pretty grey and wet. But now and then, winter serves up a great day. December 21st, the first day of winter, was one such day in Seattle, and I was lucky enough to be there photographing along with Tanya and Carson.

We spent several hours in West Seattle, visiting Lincoln Park and making two visits to the Belvedere Viewpoint (better light the second time around). Lincoln Park is the largest park in West Seattle and has great views of the Olympic Mountains and the ferry to Vashon Island. It also has wonderful madrona trees, with their peeling red bark, which I love to photograph. The Belevedere Viewpoint has an excellent view of downtown Seattle, which is across Elliot Bay from West Seattle. However, it is a bit far, so if you ever go shooting there, be sure to take a telephoto lens so you can zoom in on the buildings and ferries. Luckily for us, one of the fireboats was practicing spraying water int he bay and the snow covered Cascade Mountains were shining in the background.

From there, we drove up to north Seattle and went to Carkeek Park. I had hoped to find some salmon running in the creek in the park, but the run was apparently over. I understand it is best from mid-November to mid-December. I was just too late. Instead, I photographed on the beach and was rewarded with a great sunset.

From there, we headed to the East Portal Viewpoint on the west shore of Lake Washington (in the eastern part of the city). I hoped to get there with some light left in the sky, but traffic held us up. Still, it was fun to photograph the car headlight and tail light trails on the floating bridge (Interstate 90) over the lake and the lights from the city of Bellevue reflecting in the lake. 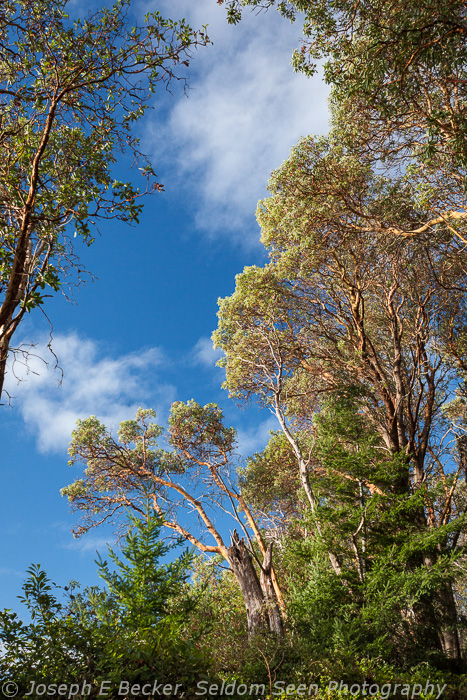 A ferry sails from the Seattle waterfront as seen from the Belvedere Viewpoint. 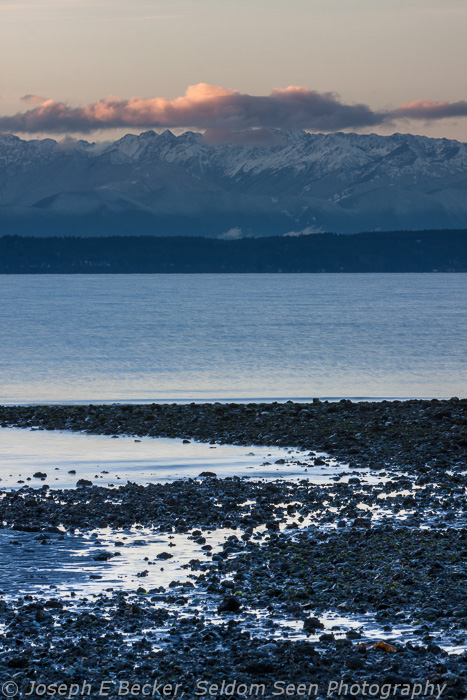 View of the Olympic Mountains from the beach at Carkeek Park, Seattle. 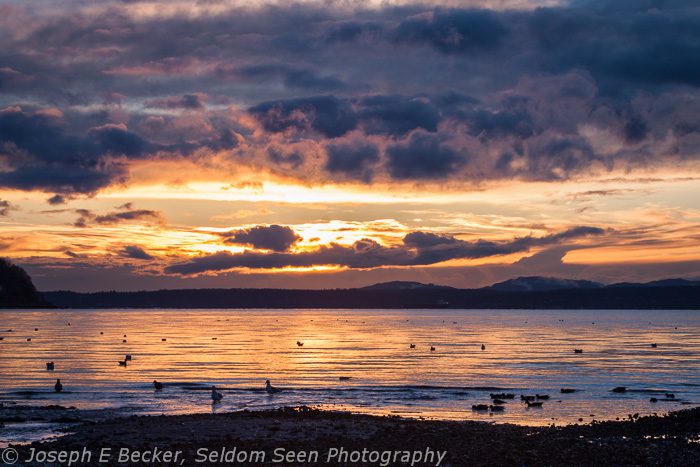 Sunset over Puget Sound from the beach at Carkeek Park.

City of Bellevue reflecting in Lake Washington. You can just see the snowy Cascade Mountains in the background.

The view from the East Portal Viewpoint in Seattle.

As many of my regular readers know, I have a day job as a hydrogeologist. I work for a company called Robinson Noble, based in Tacoma, Washington. Each year, Robinson Noble produces a calendar for clients. Many companies do something similar (so far this month, I’ve received two calendars from engineering companies, one from a well driller, and one from a trucking company). We differentiate our calendar from all the others by making it large and useable (when open, it is roughly 16×24 inches, with room to write appointments on the days), but especially by using my photography (a principal in the company) rather than stock photography. We also limit the photos to scenes from the Pacific Northwest (where the majority of our business takes place). The calendar is always well received and appreciated.

I recently wrote a post for the Robinson Noble blog that highlights the 12 images in the 2013 calendar and provides a back story to each image. Though I’ve shown many of the photos from the new calendar previously on this blog, there are several ones I have not shown. The photo above (of Haystack Rock at Pacific City, Oregon), for example, is featured on the cover of Robinson Noble’s 2013 calendar.

If you get a chance, visit my blog post presenting the 2013 calendar photos and tell me what you think.

Since coming back from Spain, I’ve been catching up on things, so I haven’t had much time to blog. Last Saturday, I did have a chance to do some photography – a wedding. This wedding reminded me of why I am not fond of doing weddings.

Though asking for a couple weeks, I didn’t learn any details of the ceremony or reception until two days before. The wedding was scheduled to start at 3:00 p.m., and I arrived at the church about 70 minutes beforehand. I was introduced to the pastor, who laid out the rules, number one of which was no flash allowed during the ceremony.

I had been told that I could have the couple for pictures for only 15 minutes – between 2:15 and 2:30. Yet when the couple arrived (right at 2:15), the pastor immediately gathered wedding party and ran through the ceremony. Finally, I was allowed to work with the couple and the wedding party at about 2:35. I rushed, and got about 15 minutes of photos in. Of course, people were filing in this whole time, and the couple spent more time looking at their friends than at the camera.

The ceremony ended up started on time and I started snapping. Of course, the pastor didn’t allow me in the center aisle, or anywhere up front. Plus the crowd was big, further limiting my vantage points. To make matters worse, my auto focus had real problems in the dim light, particularly against the couple’s dark clothes. You guessed it, thanks to a high ISO setting, slow shutter speed, and large aperture, most of the shots are bad. real bad. Yes, as far as I was concerned, the whole thing was a photographer’s nightmare.

Yet I was happy I was there. You see, it was a bit of a historic wedding. See the couple has been together for 54 years, waiting the whole time to get married. It wasn’t until the election last month, when Washington State approved gay marriage, that the couple was able to be married. They weren’t the first gay couple in Tacoma to get married (the first marriage was several days before), but they certainly had been waiting the longest time. The mayor actually performed the ceremony (the pastor assisted), and half the city council and several state politicians attended. And the local newspaper covered the event.  I volunteered my services for the event (as did everyone else involved), and everyone attending had a great time.

And though the photos aren’t my best, I think the couple – John and Rudy – will be happy with results. After all, their sight isn’t so good anymore.

The happy couple, John and Rudy, walking (and riding) down the aisle after the ceremony.

I haven’t had much chance to edit or go over the images from my recent trip to New York and Spain last month. My final night in New York, I spent an hour or so working on night shots along the East River photographing Manhattan and the Queensboro Bridge (59th Street Bridge). The location was only a couple of minutes walk from the apartment I stayed at on Roosevelt Island.

After taking several shots of the bridge and various compositions with the buildings in Manhattan, I decided to try a panorama. My efforts were frustrated by the passing of barges along the East River, which ruined the reflections in the water. But eventually I got several series of images completed. The one above is a HDR panorama created from 6 vertical shots (with each vertical shot created by 3 different exposures). Thus the complete image represents 18 different shots. Exposure times were 4, 15, and 30 seconds. The HDR work was done with Photomatix and the panorama was stitched in Photoshop. I’m not totally happy with the result, and it needs a bit more work, but I thought I’d post it to see what you thought.