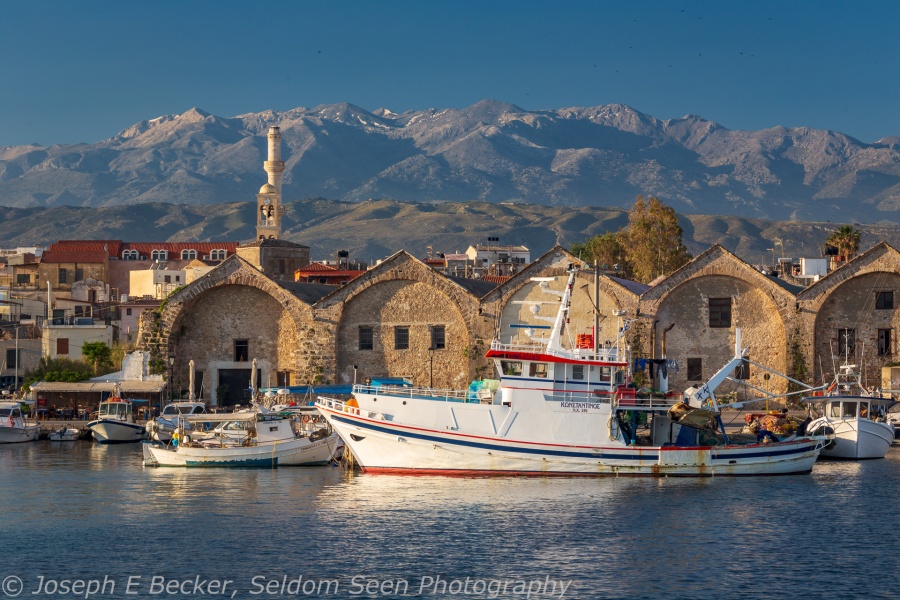 On our recent trip, Tanya and I spent several days in Chania (also spelled Hania) and loved it. The Venetian quarter is a maze of small streets and alleys with remnants of Venetian and Turkish architecture. The old quarter is centered around the beautiful and historic Venetian Harbor with its iconic lighthouse (see this recent Quick Shot post and my Instagram feed). We spent hours walking around the old streets seeping in the history of the place, as well spending time sipping drinks (and drinking in the scenery) at a harbor-front café. The Venetian quarter was busy with tourists, and I imagine it get mobbed in summer, but it was well worth visiting. However, when I went to the harbor early one morning for sunrise, there was almost no one around.

We didn’t stay in the old quarter. Instead, we stayed at an Airbnb with a nice sea view in the Tabakaria District, about a half hour walk from the Venetian Harbor. This waterfront district was home to about 80 19th-century leather tanneries (only a few survive today). Most of the old tannery factory buildings are still there, providing me a great photo opportunity literally right outside my door. To make it even better, the best restaurant we ate at in Crete (Thalassino Ageri) was just a 2-minute walk from our room. We ate at a table on the beach, a couple of meters from the waves, enjoying great seafood and a magnificent view – one direction toward the old tanneries, the other to the Sea of Crete and the far shoreline of northwestern Crete.

For travel photograph, for great food, for drinking in history, I highly recommend visiting Chania.

This is part of the shoreline in the Tabakaria District

View of the Venetian Quarter across the water, captured on our morning walk to the old town.

View down one of the small streets in the Venetian Quarter. 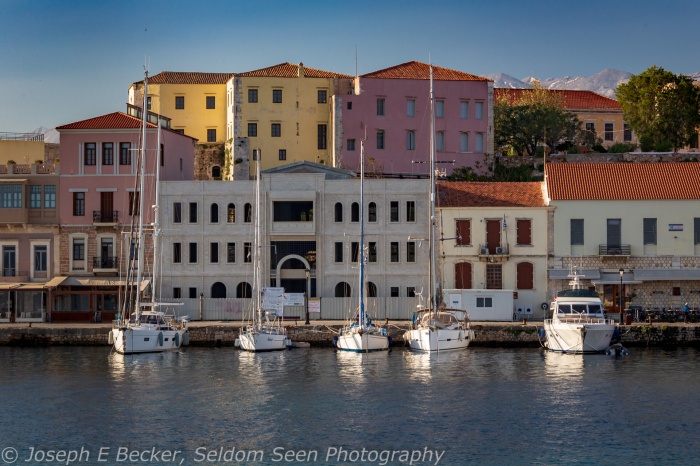 Part of the Venetian Harbor on a calm morning.

I liked this scene of a man having a morning smoke in his “Yacht Services” boat.

Old factories in the Tababkaria District at sunset 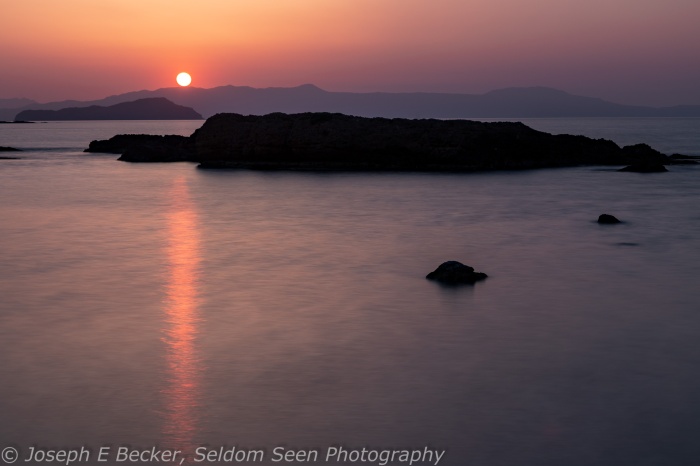 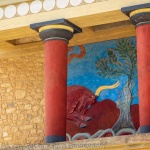 The Palace of Knossos is the capital of ancient Minoan Crete. It is reportedly Crete’s most popular tourist attraction. Ancient ruins, particularly popular ones, present a photographic challenge, at least to me. We see photographs of the ruins in guidebooks and on postcards and want to get similar shots. Yet, often the sites are only have limited hours that do not correspond with the best light and are usually overrun by tourists. How to get a few decent shots without obtaining special access (like the photographers whose images you see on the postcard)?

Knossos is the perfect example. When Tanya and I were there, the last admittance of the day was at 3 p.m. We got there about 2:30 p.m., and I was hoping the crowds would be a bit less. However, as it turned out, we picked International Monuments Day (April 18th) to visit – the good news, free admission; the bad news, more people. It wasn’t overrun with tourists, but there we weren’t alone either. Further, 2:30 p.m. is not a prime time for photography, the light is harsh and contrast can be a big problem.

And you can forget about using a tripod. Even if it would not cause a problem with the crowds, tripods (and large professional cameras – whatever the definition of that is) are not allowed. This is a common policy at many historical sites and museums (occasionally I’m surprised and they are allowed, such at the Met in New York and in the Notre Dame Basilca in Montreal).

So what is your average photographer to do? Here are a few tips I’ve discovered that help me photograph at ancient ruins (and other popular sites).

1. Use a telephoto zoom lens – if you don’t want people in your shots, you will need to zoom in to crop them out. A wide-angle lens is good for providing a big scene, but it is almost impossible to use one and not have people in your image.

2. Shoot details – sure shoot an image with the whole building, but if you want to not have people in the shot, shoot details.

4. Avoid sky when shooting into the sun – we often don’t have much choice about time of day when visiting a historical site, and that scene you’ve been dreaming about shooting is toward the sun. Cut out the sky to avoid the contrast. For example, one of the most common shots you will see of Knossos is similar to the featured shot above, except that it usually shows some sky as well. Here, shooting toward that sun, I cut out the sky to avoid bad contrast and a totally white sky.

5. Shoot in the shade – again, not having much choice about time of day, shooting in mid-day can cause lots of contrast problems. Look for compositions that are in shade and avoid the contrast of partial sunlight.

6. Up your ISO – often you will be shooting not out in the sun, but in a dimly lit rooms or grottoes. Without a tripod, remember to increase your ISO. 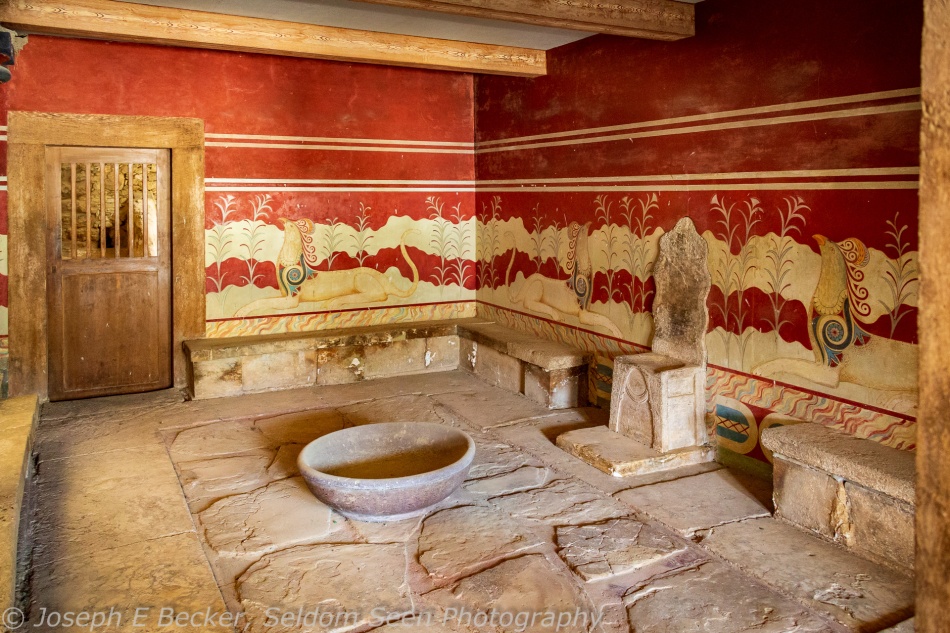 The Throne Room at Knossos is dimly lit. I used a high ISO in order to capture the image.

To shoot the Queen’s Room, I had to shoot a bit from the side rather than straight on. I purposely did not crop tightly in-camera, giving me plenty of room to make a perspective correction in Lightroom.

This mural at the South Portico is another example of shooting wide, and in this case, also upward to avoid a distracting plastic barrier, and then making a perspective correction. 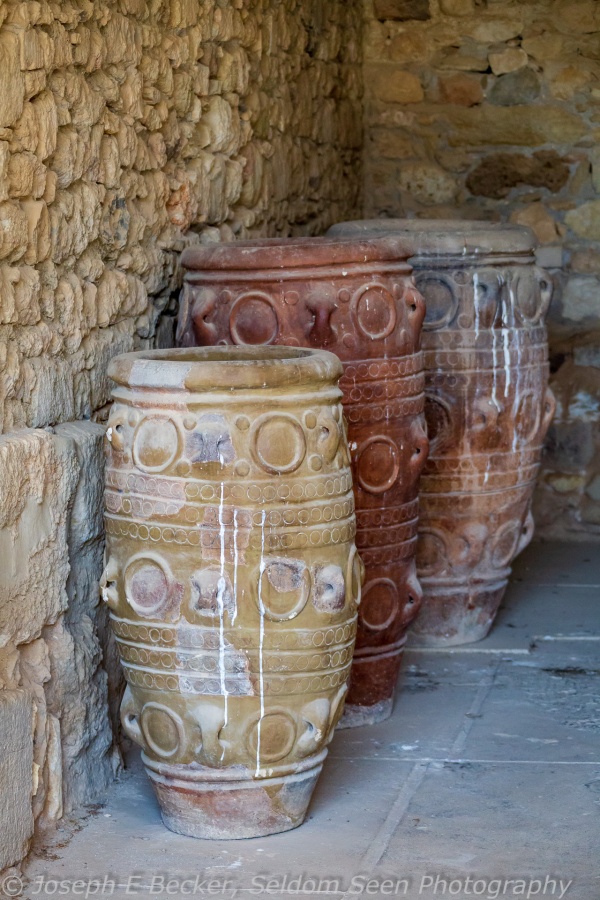 These old large pots were in the shade, allowing me to more easily control contrast.

Another set of large clay pots – details like this are easy to photograph without other tourists in the shot.

This room next the Queen’s Room was closed and only visible from a small window. No other tourists to worry about and in the shade solving contrast issues.

Tanya and I just returned from a second honeymoon in Greece. As a second honeymoon, I tried to keep photography as a lower priority, so I didn’t shoot as much as I would have normally (though Tanya says that any trip is a photography trip). But that doesn’t mean I didn’t take a few good shots. We spent a week on Crete, several days in the Delphi region, and four days in Athens. One morning while in Chania, also known as Hania, in northwestern Crete, I got up early for sunrise and went to the old Venetian Harbor. The light was magical, and the place was empty of the thousands of tourists that haunt the harbor area during the day and evening. This is a shot of the harbor entrance, showing the Venetian lighthouse, built in the 16th century.

I took the shot using a 10-stop neutral density filter to smooth the water. This is a 25-second exposure at f/8. I’ll be posting more from the trip over the next several weeks.